In kitchens around the world, the cilantro vs parsley debate has raged for decades; fortunately, there are some clear differences between these two tasty herbs.

The reason that the cilantro vs. parsley debate even exists is that the two herbs look so similar. However, that isn’t the only thing that separates these two.

Known as Coriandrum sativum, cilantro is a flavorful herb that is often referred to as coriander in the Mediterranean region and Europe. Cilantro, also called Chinese Parsley, with its variably sized leaves that are broader at the base, looks much like flat leaf parsley. However, the taste of cilantro is quite strong, and there are citrus overtones. In terms of their culinary uses, you will often use cilantro in guacamole, quesadillas, salsa, salads, soups, and curries. [1]

There are quite a few impressive health benefits of cilantro as well; thanks to its active ingredients and nutrients, such as phosphorous, potassium, calcium, zinc, dietary fiber, magnesium, vitamin C, and various antioxidants, these leaves can reduce inflammation, boost bone health, strengthen the immune system, and regulate digestion. [2] 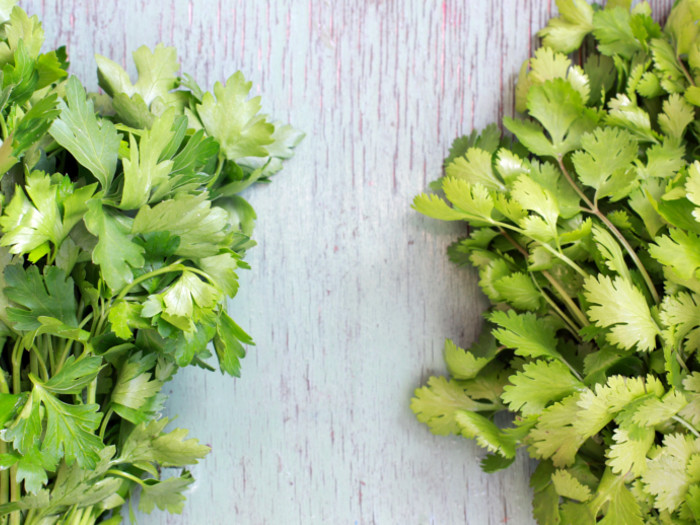 Scientifically known as Petroselinum crispum, parsley is native to the Mediterranean leaves, and its tripinnate leaves are quite similar to those of cilantro, which is why these two herbs are so difficult to tell apart. Parsley also has a much milder flavor than fresh cilantro. For recipes that may call for both cilantro and parsley, be sure to balance them equally; too little parsley and the dish may be overpowered by cilantro’s citrus bite! Parsley is often used as a garnish or topping, or occasionally an ingredient in soups or salads. [3]

Parsley contains high levels of vitamin A, C, K, iron, folate and other flavonoid antioxidants, as well as various volatile oil components, such as myristicin, limonene, and eugenol. This uniquely powerful nutrient profile makes parsley very effective at reducing oxidative stress and chronic disease in the body. The use of parsley is also associated with regulating blood sugar levels, soothing arthritis pain and discomfort, and strengthening your immune system. [4]

Rate this article
Average rating 3.9 out of 5.0 based on 66 user(s).
Read This Next:
Popular Articles