Parsley is an antioxidant-rich herb that may help manage diabetes, boost the immune system, and improve bone health. It can be good for maintaining healthy kidneys, heart, and brain. Moreover, chewing on a few leaves can also help freshen your breath. Many people use parsley for skin and hair care as well.

Parsley is an herb that came from the Mediterranean region of southern Italy, Algeria, and Tunisia. It is scientifically known as Petroselinum hortense and Petroselinum crispum. It is used as an herb, a green leafy vegetable, and as a spice in its fresh and dried form. [1]

As per the USDA, the nutrients found in fresh parsley may include potassium, calcium, magnesium, phosphorus, and sodium. It is a good source of vitamin A, C K, and E, thiamin, riboflavin, niacin, vitamin B6, folate, iron, and zinc. [3]

It can also be a very good source of volatile compounds such as myristicin, limonene, eugenol, and alpha-thujene. Its leaves contain energy, carbohydrates, fats, and protein. With only 1 calorie in a 1 tbsp serving, parsley is easily a great addition to your weight loss regimen.

May Prove To Be A Rich Source of Antioxidants

Parsley may contain several flavonoids including luteolin, apigenin, lycopene, beta-carotene, and alpha-carotene. These compounds can have antioxidant properties and they may help to keep the immune system healthy. [4] [5]

A 2006 study suggests that some of these antioxidants can help in the free radical-scavenging activity. This means that parsley may have a role in helping prevent chronic diseases.

One study also showed that apigenin, found in plants like parsley and celery, can have a therapeutic effect on autoimmune diseases. [6]

A research conducted on rats revealed that parsley has diuretic properties. In this research, the rats were administered parsley extracts for a certain period of time. The results of the experiment showed that these rats had a much higher urine flow than when they were offered only water for the same duration. [7]

Another study published in the American Journal of Clinical and Experimental Urology [8] suggests that parsley may help in urolithiasis. The study was conducted on four divided groups of rats- positive control, negative control, parsley, and the cystone group. The results of this study found that the parsley group appeared to be calculi-free on a higher level than the other three groups. This means that when taken in the pharmaceutical/supplemental forms, parsley may help in reducing excess urinary calcium excretion.

Studies also show that parsley can help in providing relief from bloating, edema, or water retention. [9] [10]

A research study showed that diabetic rats that were given parsley actually showed a decrease in their blood sugar levels over a period of a month. Traditionally, it was used as a medicine for diabetes in Turkey. [11]

Research also points out that parsley extracts may even help in alleviating type 1 diabetes mellitus. [12] 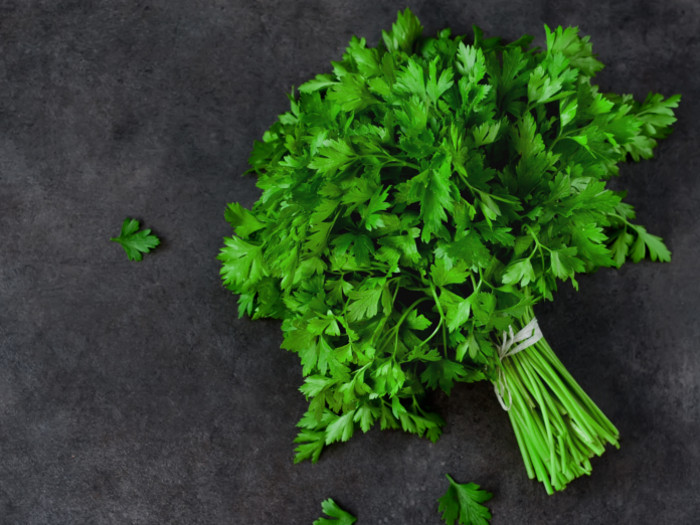 Parsley may have the potential to strengthen your bones. [13] [14]

Research suggests that parsley extracts may aid in the treatment of bone health problems. The herb contains calcium, ergosterol (a precursor of vitamin D), and vitamin C, which can collectively help to keep your bones strong. [15]

Another research suggests that polyphenols may help in alleviating diseases like osteoporosis and osteopetrosis. Parsley is a good source of a polyphenol called apigenin, which can accelerate bone formation. [16]

Apigenin, a potent flavone most certainly present in parsley, may help improve neuron formation and may enhance brain functions such as memory and learning. This plant compound is being researched for its ability to help against depression, Alzheimer’s, and Parkinson’s disease. [17]

A research study in 2009 found that parsley leaf extract had a protective effect on mitochondrial function. [18]

Parsley can also help in reducing the impact of cadmium toxicity on brain tissue. [19]

Melasma is a condition that may influence the self-image of people suffering through it and may end up affecting their psychological health. A 2017 study shows that parsley is being tried for alleviating epidermal melasma. [20]

The paste made from powdered seeds of this plant has long been used as a natural remedy for hair lice, dandruff, and scalp irritation. It may also help strengthen weak hair, promote healthy hair growth, and also might have the potential to stop hair fall. The nutrients in this powerful herb can help increase keratin and collagen production, which may protect the hair from free radical damage. [21]

Parsley may prove to be very helpful in protecting your heart. [22]

A comparative study showed that parsley may be much more effective than carob in lowering high cholesterol levels. [23]

Studies also show that parsley can help in treating hypertension and cardiac disease. It is being considered an important medicinal plant. [24]

Parsley is abundant in flavone antioxidants, which can reduce oxidative stress, thus boost cardiovascular health. This herb also contains high levels of vitamin B and folic acid that can help to prevent the thickening of artery walls. 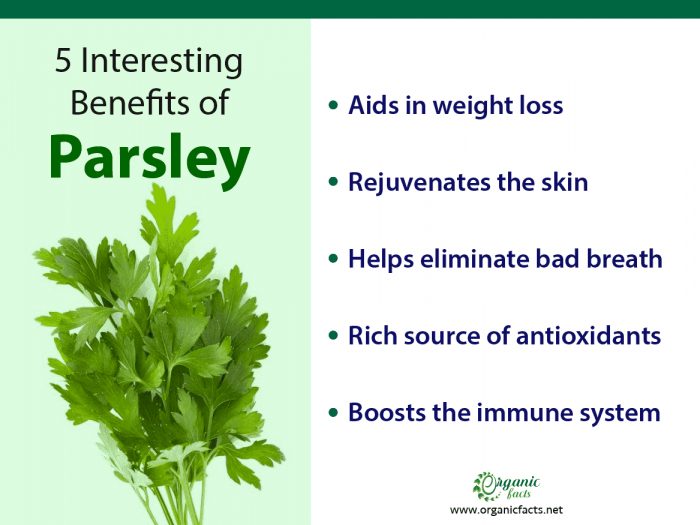 Although parsley may have diverse benefits, ingesting them in large quantities may manifest unwanted side effects and disadvantages. Some of them include the following:

Parsley has been cultivated by man for more than 2,000 years and was highly regarded in Greek culture since it was used in various ceremonies. The Romans also used it in many ways. [32]

Pliny the Elder, a 1st century AD historian, wrote that it was consumed by people from all walks of life. At first, it was used only as a medicinal plant, but later on, it was consumed as food.

There are many myths and fables associated with the origin and growth of this plant across many Mediterranean and European cultures. The Greeks believed that it had sprung up from the blood of the fallen Greek hero Archemorus. Thus, Greeks started associating it with death and destruction. But in the Middle Ages, parsley was included in folklore medicines and it slowly gained popularity. This is possibly how its image as a health herb developed. Parsley root, a predominantly tropical plant, needs moisture and ample sunlight to grow. The root form is a new addition, which only began to be cultivated about 300 years ago, and was first grown in Hamburg, Germany.