10 Foods to Avoid During Pregnancy

Eating well and healthy is very important during pregnancy. It will help to keep yourself and the baby healthy. Therefore, some foods should be avoided for the well-being of both. These foods should be avoided either because of its contents or the way they are prepared. Guidelines in this article will help you to plan your meals safely during pregnancy.

A healthy diet is important during pregnancy, but understanding how the food intake affects the mother and the child during pregnancy is equally important for the expectant mother. According to a recent study, women with poor diets before pregnancy are more likely to give birth prematurely than women who have healthy diets. Fruits, vegetables, meat and other dietary supplements are a good source of vitamins, minerals, and other nutrients that are important for both the mother and child, but there are certain fruits and vegetable that are good to avoid during pregnancy. [1]

Following are the most commonly avoided food items during pregnancy:

Unwashed Vegetables and Fruits: Vegetables and fruits that are not washed well should be avoided completely, since they may contain parasites such as toxoplasma. This parasite causes toxoplasmosis, which is harmful for the baby. Therefore, it is recommended to clean vegetables and cut away areas that are bruised.

Papaya: Research studies suggest that fully ripe papayas are safe while unripe and semi-ripe papayas should be avoided, as it has latex, which may cause uterine contractions. This is not safe for pregnancy. [2]

Pineapple: Pineapples are a rich source of bromelain, which may not be safe during pregnancy. It may also cause allergic reactions or stomach ailments, such as diarrhea. Therefore, it is good to avoid the intake of pineapple when pregnant. 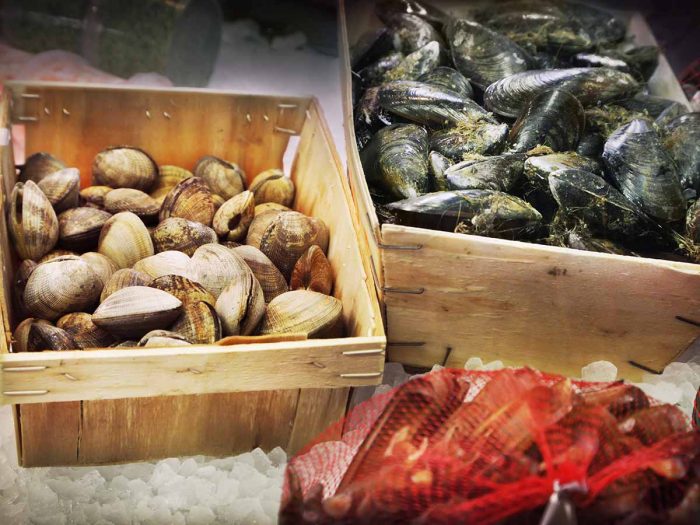 Know what foods to avoid during pregnancy. Photo Credit: Shutterstock

Raw Meat: Raw or uncooked meat/poultry/seafood should be avoided during pregnancy. Raw meat may get contaminated with salmonella, coliform bacteria, and toxoplasmosis, which can be dangerous during pregnancy. [3]

Deli Meat: Consume deli meats only after heating them until they are steaming hot. Deli meats are easily contaminated with listeria, which is harmful during pregnancy.

Fish with Mercury: Fish consumption is known to be good for both mothers and babies during pregnancy. However, some fish may contain high mercury levels that may harm unborn babies. Tile fish, shark, mackerel, and swordfish are some of the types of fish with high levels of mercury.  Fish caught as a part of sport from lakes or rivers may also contain pollutants and can be dangerous for your baby’s growth.

Seafood: Pregnant women should not eat raw seafood or chilled & peeled prawns that are prepared ready-to-eat. Smoked and refrigerated seafood (usually comes with the label as jerky, kippered, lox, or nova style) are safe when they are a part of a cooked dish.

Raw Shellfish: Shellfish (such as oyster, mussels and clams) often contains harmful bacteria and viruses that may cause food poisoning. Therefore, raw shellfish should be avoided all throughout pregnancy. [4]

Pregnant women should avoid cheese made of unpasteurized milk or those that are soft cheeses. Some of the soft cheeses that should be avoided include (Danish blue, brie and blue brie, gorgonzola and camembert. Listeria bacteria are usually found in soft cheeses. It can cross the placenta and can cause damage to the baby and could be life-threatening. Therefore, avoid the intake of soft and semi-soft cheeses during pregnancy. [5]

Alcohol: The consumption of alcohol should be avoided during pregnancy. It can cause fetal alcohol syndrome and can damage the child’s brain and could later affect the behavioral and learning capability of the baby.

Caffeine: Caffeine consumption may affect the growth of your baby during pregnancy. The excess consumption of drinks containing caffeine should be limited to 200 mg per day. Some of the drinks include cola drinks, tea, coffee, and chocolate. Supplement yourself with water, juices, and milk rather than caffeinated beverages.

The intake of raw eggs should be avoided during pregnancy. Eggs should be cooked thoroughly before being used in preparations such as scrambled egg, fried egg, and quiche. If consuming boiled eggs, they should be cooked until they are white and the yolks are solid. Eggs should not be dirty or cracked. Raw eggs are commonly found in mousse, mayonnaise, aioli, homemade Caesar dressings, ice creams or custards, and Hollandaise sauces. Avoid consuming these food products during pregnancy. [7]

Pate or Meat Spreads: Refrigerated pate or meat spreads should not be consumed during pregnancy. It might contain bacteria Listeria, which is harmful for the unborn baby.

Honey may be contaminated with clostridia spores, which may cause infant botulism, a type of paralytic disease. It is better to avoid the consumption of honey during pregnancy. [8]

Raw or semi-cooked bean sprouts (such as broccoli sprouts, alfalfa sprouts, clover sprouts, sunflower sprouts, snow pea sprouts, onion sprouts, soybeans sprouts, and mung beans) should not be consumed during pregnancy, as it may lead to salmonella outbreaks. 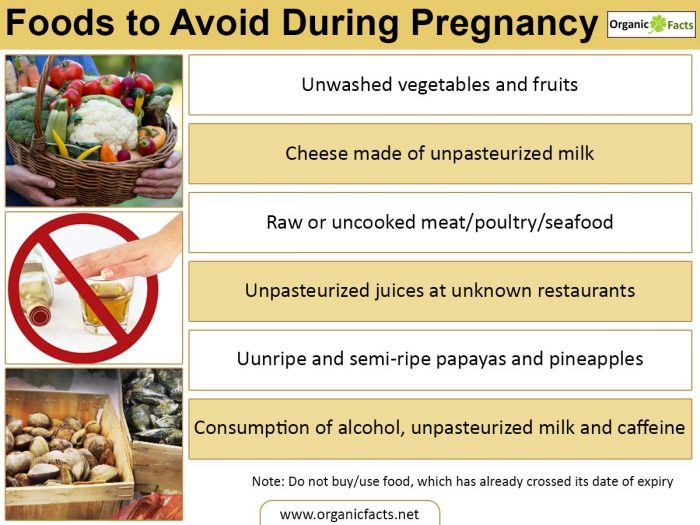 Herbal tea and supplements are known for their health benefits, but excess consumption should be avoided during pregnancy. The herbs may contain caffeine. It is advisable to consult your doctor regarding herbal intake.

Avoid consuming peanuts during pregnancy, as it might cause allergies against peanuts to the baby at a later stage and could also be harmful for the unborn baby.

Smoking is very harmful for the baby. It is better to quit smoking during pregnancy, since it may cause SIDS (Sudden Infant Death Syndrome), respiratory problems, low birth weight, and premature birth. [9]

What not to Buy?

Pregnant women should be careful while buying food for her. Do not buy/use food, which has already crossed its date of expiry. Following is not recommended:

-Frozen products that are not solid

-Hot food, but not piping hot

Food should not be left uncovered. It should be kept in covered containers or as recommended by the manufacturer. It is better to avoid leftover food. However, if not so, it should be properly covered and then refrigerated after cooling. Leftover food should not be consumed after two days. It is better to throw it. Do not freeze the food again and again. Do not use the food after freezing it more than once.

It is not only important to keep a healthy diet during pregnancy, but also remember not to diet. The priority should be to eat healthy and not diet, along with keeping your weight gain to a minimum.

Rate this article
Average rating 3.9 out of 5.0 based on 74 user(s).
Read This Next:
Popular Articles