There are several impressive health benefits associated with alfalfa, including its ability to lower cholesterol levels, improve digestion, and protect heart health. It also helps improve respiratory conditions, detoxify the body, aid immunity, speed healing, and reduce inflammation. Apart from this, it has anti-cancer properties.

Alfalfa (Medicago sativa) is an important foraging crop in countries around the world and sometimes goes by the name Lucerne in Europe and other countries. Although it was originally cultivated in south-central Asia, it has now become a globally recognized crop due to its impressive nutritional content and versatility in use. It is primarily used for feedstock for animals and livestock, particularly the hay of this plant. This plant remains an important staple crop for humans as well, primarily for these sprouts. [1]

With high levels of vitamin B, vitamin C, vitamin D, vitamin E, and a variety of proteins and other important minerals, adding alfalfa sprouts to salads and sandwiches is an easy way to give yourself a nutritious boost. The fiber content and nutritional profile that benefits animals are slightly different than the part of the plant humans tend to eat, but the value is clear.

Let’s discuss the common benefits of alfalfa in detail.

Alfalfa has shown that it has an impressive amount of dietary fiber, which is very important in the battle against cholesterol. In addition to numerous other chemical compounds, called saponins, fiber can attach to cholesterol and prevent it from locking on to arterial walls. This also helps balance HDL (good) cholesterol levels in the body. This can prevent the buildup of plaque, atherosclerosis, heart attacks, and strokes. [4]

This plant was often used in the traditional treatment of arthritis and other inflammatory conditions. Alfalfa possesses high levels of vitamin C and vitamin B, as well as calcium and antioxidant compounds. All of these can reduce inflammation in the joints and around the body, while also strengthening the immune system and preventing chronic disease and oxidative stress. [5]

Dietary fiber is heavily relied on by the body to monitor and optimize digestive health. Dietary fiber is not only able to bulk up the stool and speed up its movement through the bowels, but it can also reduce inflammation in the gut. Thus it helps in clearing up issues like indigestion, bloating, cramping, diarrhea, constipation, and a bacterial imbalance in the gut microflora. Therefore, it is advised to consume alfalfa tablets regularly for a better bowel movement. [6] 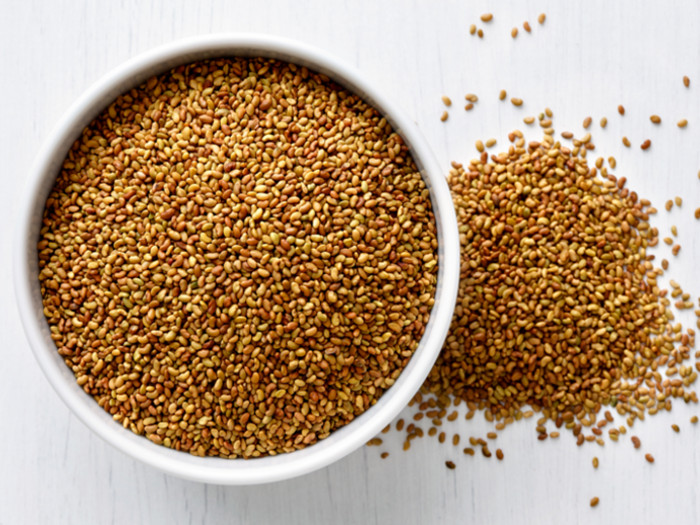 Alfalfa is widely known for its tolerance of drought, heat, and cold. Photo Credit: Shutterstock

In its more traditional usage, alfalfa sprouts were used to make a poultice to apply to wounds and injuries to induce faster healing and the prevention of infection. The antioxidant components protected the exposed area, while other minerals and nutrients stimulated blood flow to the area and increased the rate of repair and healing. The high supply of protein in alfalfa tablets, when consumed, is also a major boost to growth, development, and repair. [7]

With a high content of vitamin C, this sprout is an ideal booster for your immune system. Vitamin C not only stimulates the production of white blood cells but also acts as an antioxidant to eliminate oxidative stress. Furthermore, B vitamins and vitamin E also act as metabolic regulators and antioxidant compounds throughout the body, and both of those are also found in this unassuming sprout. [8]

Alfalfa has been widely used around the world in the treatment of kidney conditions, namely due to its diuretic properties. By stimulating more frequent urination, alfalfa can speed up the detoxification of the body, along with excess salts, fats, and water. [9]

Kathrin Reinli, University of Berkley, California, USA, published a study in the Nutrition and Cancer Journal that suggests that phytoestrogens are some of the most impressive chemical compounds, which are extremely important for the body in the battle against cancer. These hormones essentially act as antioxidants and prevent mutations in healthy cells, thus lowering your risk of cancer. The active components of this plant are also known to bind well with carcinogens in the body and colon, thus promoting their expulsion from the body before they can do any more damage. [10]

Traditionally, alfalfa was widely used in the treatment of respiratory conditions, such as bronchitis, the flu, and the common cold, as well as other viral and bacterial infections. Alfalfa has anti-inflammatory properties, which made it useful in treating various breathing conditions, such as asthma, while also strengthening the immune system to neutralize the underlying infections attacking the respiratory tracts. [11]

Potassium and iron are both found in significant supply within alfalfa, and these benefit the heart in different ways. Potassium is a vasodilator, which helps to lower blood pressure by releasing the tension on blood vessels and arteries. Furthermore, the iron content of these sprouts boosts red blood cell production, thus improving circulation and ensuring that the body’s organ systems are properly oxygenated. This puts less strain on the heart because the extremities will be demanding less blood and oxygen from an already overworked heart. [12]

Due to the high content of saponins and canavanine, excessive consumption of raw alfalfa sprouts can have adverse effects on the body as follows:

Alfalfa should be prepared properly and eaten in moderation. To have a safe human consumption, you may also opt for alfalfa tablets. That being said, alfalfa is a concentrated source of nutrients that you should add to your diet. [13]

Rate this article
Average rating 4.0 out of 5.0 based on 286 user(s).
Read This Next:
Popular Articles