There are many different benefits of krill oil, including weight loss, reduced inflammation, relief from arthritis and, better digestive health. It also helps in lowering cholesterol levels and strengthening the immune system, among others.

What is Krill Oil?

Krill oil is derived from krill, which are small crustaceans, similar to shrimps. This oil contains a wide variety of omega 3 fatty acids, including EPA and DHA, and phospholipid-derived fatty acids (PLFA). Mostly found in Antarctica, the word ‘krill’ in Norwegian means ‘whale food’, which makes it fitting as they are the primary food of white whales, Baleen whales, and mantas.

When it comes to impressive animal products that have an impact on human health, few things are as beneficial as krill oil. The oil from krill is extracted by people and put into capsules to then be consumed. In certain parts of the world, krill are harvested for aquarium food, as bait, or in pharmaceutical applications. In Japan, it is used as a food source, but krill has recently got the world’s attention for the oil it possesses. [1]

While fish oil tends to get a great deal of attention in health circles, the oil derived from krill is equally important. The general effects of krill oil are slightly different than regular fish oil, namely because krill oil’s omega-3s are bound to phospholipids, while fish oil’s omega-3s are bound to triglycerides. Krill oil is an excellent source of astaxanthin, one of the strongest-known natural antioxidant, which is not found in most fish oils. Krill oil is not as widely available as fish oil supplements, but it is becoming easier to source it with each passing year, as its many health benefits are recognized. [2] [3] 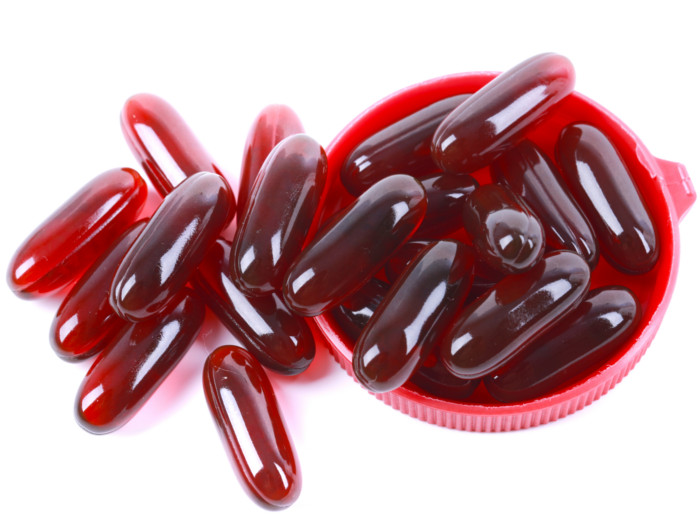 Now, let’s take a closer look at the many impressive krill oil benefits.

One of the best-known properties of omega-3 fatty acids is their effect on heart health. Krill oil, being rich in the omega-3 fatty acids, help to reduce the build-up of cholesterol in your arteries and prevent hardening and atherosclerosis. This can significantly lower your blood pressure and reduce your risk of heart attacks and strokes. [4]

Aside from its impact on the cholesterol levels in the body, omega-3s also act as powerful anti-inflammatory agents and are able to transform into eicosanoids and prevent the inflammatory response of the body. This makes the omega-3s found in this natural oil excellent remedies for inflammatory conditions like arthritis, osteoarthritis, and gout, as well as inflammation of the arteries and blood vessels. [5]

A significant amount of research has studied the impact of omega-3 acids (EPA and DHA) on neurotransmission in the brain. The studies have shown positive effects on mood and anxiety, and these acids can even be taken as antidepressants. This makes a healthy dose of krill oil, particularly when you are recovering from an illness or an emotionally tumultuous time, and even better for your overall health! [6]

Krill oil is beneficial in reducing the fat deposits in the body and improving the metabolic activity. It prevents an omega 3 deficiency in the body, which is one of the major reasons for a slow metabolic rate. It also provides the body with various antioxidants, including astaxanthin, which helps in creating a bond between omega 3 fatty acids EPA and DHA, which are responsible for direct metabolism.

Omega 3 fatty acids present in krill oil help to kill off the cancer-causing cells and induces apoptosis. It has shown to have positive effects on colorectal cancer, breast cancer, and prostate cancer. [7]

Krill oil is also beneficial for eyes, as its nutrient-rich composition helps in preventing dry eyes, macular degeneration, and other eye conditions. It can also prevent vision loss or blindness.

This oil is beneficial against a number of inflammatory bowel diseases, including ulcerative colitis. The protective compounds found in this oil help relieve sores and inflammation in the gastrointestinal tract.

When it comes to the proper development of your fetus and your small, newborn infants, krill oil can help ensure that the nervous system, brain, and eyes receive the nutrients they need. Different chemicals and compounds are required for different levels of development, so pregnant women should ensure they have enough omega-3s for a healthy child. Krill oil is a great source for this. [9]

Although not commonly known as a digestive agent, krill oil does have an effect on the gastrointestinal system, namely due to its anti-inflammatory properties. This oil can eliminate stomach upset, indigestion, hemorrhoids, and constipation, resulting in the better overall health of your entire system. [10]

One of the other properties of krill oil is its ability to boost the immune system. Krill possesses an antioxidant called astaxanthin, which can significantly improve the strength of your body’s defenses and can seek out free radicals and neutralize them. This can lower your chances of developing chronic diseases and prevent other infections throughout the body. [11]

Krill oil is a great way to benefit from omega-3 fatty acids and antioxidants to lessen those unpleasant PMS symptoms. For women who suffer intense physical and mental symptoms when going through their pre-menstrual period, krill oil can help to balance out the hormones and reduce anxiety. Omega-3s can reduce issues like cramping, heavy flows, and unpredictable menstrual cycles [12]

Krill oil is known to improve retention of information and concentration skills. By reducing the oxidative stress in the brain, this oil can also help prevent epilepsy, schizophrenia, dementia, and autism. Research has shown that antioxidants present in krill oil help improve cognitive ability especially in the elderly. The antioxidants present in it are able to stimulate neural activity by clearing out plaque and ensuring blood flow to the capillaries around the brain.

One of the important organs affected by krill oil and its constituent chemicals is the liver. Given that the liver is the detoxification center of the body, hepatoprotective effects are important. A regular supplement of krill oil can ensure that your liver continues functioning normally, and keeps your blood clean! [13]

Omega 3 present in krill oil has amazing antioxidant activities that help in reducing inflammation in the body, thereby preventing conditions like acne and removing the harmful contaminants from the skin.

Unlike certain types of fish where fish oil is derived, krill species are not known to possess dangerous minerals, such as mercury. Since krill only feed on the lowest level of the food chain, phytoplankton, they do not intake any of these minerals. Krill oil is incredibly pure, which is yet another reason why people are beginning to switch to this completely natural and beneficial option. [14]

Side Effects of Krill Oil

Krill oil, in spite of the many benefits, can have side-effects that include:

Other side effects include the following:

Rate this article
Average rating 4.0 out of 5.0 based on 101 user(s).
Read This Next:
Popular Articles