There are impressive benefits of ceylon tea, including its ability to aid in weight loss, protect against chronic illness, boost heart health, increase energy levels, strengthen the immune system, improve the appearance of the skin, moderate diabetic symptoms, and prevent kidney stones.

You may not be familiar with the term ceylon tea, possibly because you’ve never heard of Ceylon – the formal name of Sri Lanka until 1972. Tea production in this country is impressive and is responsible for over $1.5 billion of global tea sales. The excellent terrain and temperature of Sri Lanka make it an ideal location to grow this tea, and it comes in three varieties – black, green, and white. You can find ceylon tea all over the world, but many people may simply mistake it for regular old black tea. Black ceylon tea is the most common form and has a mild flavor that is reminiscent of citrus fruits. Green ceylon tea has a more pungent, nutty flavor than its black counterpart, and has the highest level of antioxidants since these tea leaves are unfermented. Finally, white ceylon tea is the most expensive and rarest form and is prepared, harvested, and processed by hand, along with being allowed to dry in the sun, giving it a sweeter, more pleasant flavor than the other two varieties. [1] [2]

Essentially, any tea that comes from Sri Lanka is called ceylon tea, and it is widely praised around the world for its high polyphenolic content, which bestows a number of health benefits on those who regularly consume this tea leaf variety. More specifically, ceylon tea is believed to have a warming influence on the body, and always has a slightly tangy taste, which sets it apart from other varietals on the market. The flavonoids, antioxidants, and polyphenolic compounds in ceylon tea have made it a popular remedy for a wide variety of ailments and afflictions, and can even be used in topical applications for certain issues.

Let’s take a closer look at some of the health benefits of ceylon tea.

One of the best things about ceylon tea is its ability to stimulate metabolism, making it a precious tool for those attempting to lose weight. By speeding up the metabolism, your body naturally burns fat faster, even if you don’t change other aspects of your lifestyle or workout regimen. This means that by giving your metabolism a morning boost with ceylon tea, you will have more energy for even more activities, which may further increase your calorie-burning efforts! [4]

Ceylon tea possesses a measurable amount of potassium, which is a crucial element of heart health since it functions as a vasodilator. This means that it relaxes the tension in blood vessels and arteries, allowing your blood pressure to decrease to normal, healthy levels and reduce the strain on your heart. A cup of ceylon tea to start each day, along with a potassium-rich fruit like bananas, can do wonders for your long-term heart health. [6]

Sri Lanka used to be a major coffee-producing nation, but a lot of that infrastructure has shifted to making tea. However, ceylon tea and Sri Lankan coffee share an important characteristic – caffeine. By providing your body with a healthy dose of caffeine, this tea can boost your cognitive acuity and attention, and also pull you out of that morning energy slump. If you drink it at a regular pace, perhaps 2-3 cups over the course of the day, you’ll also avoid the terrible caffeine crash that you so often get from coffee. [7]

Some of the antioxidants that have been identified in ceylon tea are specifically linked to reducing collagen loss in the skin by preventing oxidative stress in the surrounding cells. Collagen is important for skin elasticity, namely preventing the appearance of wrinkles and keeping the skin taut and strong. By preventing oxidative stress in this way, you can prevent premature aging, eliminate those pesky wrinkles, and also promote healthier blemish-free skin. [8] 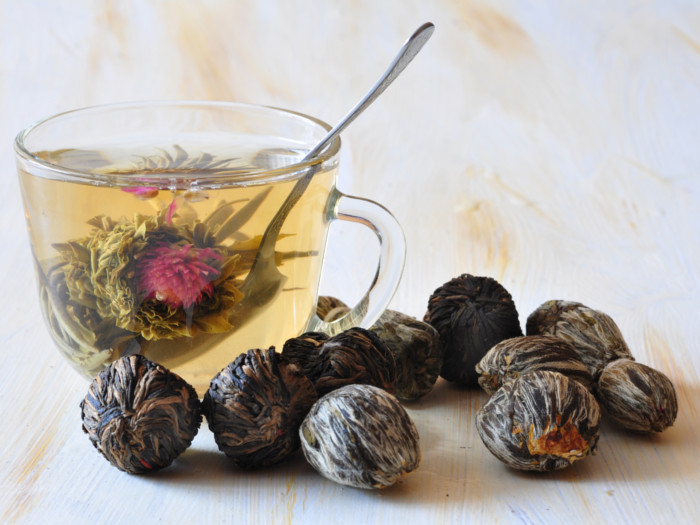 Dried flowers can be used to make a warm cup of tea. Photo Credit: Shutterstock

Research has connected the consumption of black tea to a decreased risk of developing kidney stones. This is believed to be connected to both the caffeine content and antioxidants present within this miraculously delicious and beneficial tea variety!

In an animal study by the  [10] [11]Iranian Journal of Pharmaceutical Research, ceylon tea has proven to have antihyperglycemic and antioxidative properties, which denotes that the tea is effective in preventing diabetes complications.

The impressive antioxidant range that ceylon tea possesses makes it a powerful aid to human health in many ways. Specifically, the theaflavins and thearubigins found in this tea are known may help prevent cellular mutation and oxidative stress. Ceylon tea may have the potential to be a great line of defense to boost the responsiveness of your immune system against various chronic diseases.

Word of Caution: Due to the notable content of caffeine found in this tea, it is not recommended that pregnant women consume it, as this can lead to complications in the pregnancy, not to mention the fact that most babies cannot process caffeine in utero. Furthermore, if you have anxiety problems, adding caffeine to your diet isn’t always the best option. However, in low-caffeine doses (steeping for short periods of time), ceylon tea can help to eliminate some of the factors that may be causing you stress. As always, it is best to speak with your doctor before adding a new herbal treatment to your normal dietary or health regimen.

Rate this article
Average rating 3.9 out of 5.0 based on 360 user(s).
Read This Next:
Popular Articles