Cinnamon tea is a delicious and easy-to-prepare beverage that may offer a wide range of health benefits. These might include its ability to aid in weight loss, regulate blood sugar, improve digestion, strengthen the immune system, and boost cognitive function, among others.

While most people associate cinnamon with a sweet flavoring for various recipes or a delicious topping for their favorite coffee drink, it may also be an incredibly powerful spice used in various ways to improve overall health.

What is Cinnamon Tea?

Cinnamon Tea is a healthy beverage prepared with cinnamon sticks. Cinnamomum cassia might be the most common and popular variety but there are a number of other species within the genus that can have similar effects when used as an herbal tea. [1]

Cinnamaldehyde is the active ingredient in all cinnamon species, and this bioactive compound may have a number of beneficial effects on the body. This particular compound is complemented by coumarin, linalool, cinnamic acid, proanthocyanidins, catechins, and other powerful substances that can be accessed through a cup of this delicious tea.

Cinnamon tea has many important health benefits. Let us discuss them in detail:

Research has shown that regular cinnamon supplementation may result in lower levels of blood sugar, believed to be caused by reduced insulin sensitivity. For those suffering from Type 2 diabetes, this can be important, as high blood sugar must be constantly monitored. A study conducted by researchers from the University of Burmingham, UK, and published in the Diabetes, Obesity and Metabolism Journal,  showed that 7 men taking cinnamon regularly experience increased insulin sensitivity for at least 12 hours. [3]

In another study conducted by a team of French researchers and published in the Journal of American College of Nutrition, a consumption of 500 mg of cinnamon powder daily for not less than 12 weeks might have led to a 14 percent drop in the oxidative stress levels among those with insulin resistance. This is important, as a study published in the Recent Patents on Inflammation and Allergy Drug Discovery Journal, has called oxidative stress as the potential reason for people developing various kinds of chronic diseases, that include Type 2 diabetes. [4] [5]

In medicine, cinnamon is also thought to help the body store less fat. Common thoughts are that by reducing the amount of insulin produced, cinnamon tea may also reduce blood sugar. Due to this, your body may store less fat and you will gradually lose weight. More studies are needed on the true efficacy of cinnamon in weight loss. [6]

Cinnamon may have a proven effect on glycemia. Reviews are mixed with regards to whether or not cinnamon has a significant impact on cholesterol. One study shows it may help in lowering LDL cholesterol levels and increasing HDL cholesterol levels, thereby decreasing your chances of developing atherosclerosis or having a heart attack or a stroke. Lower cholesterol levels are also important for preventing coronary heart diseases. [7] 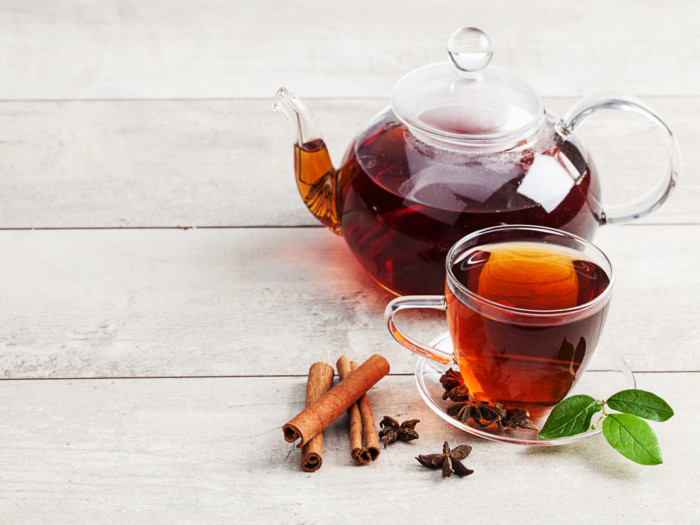 Cinnamon tea is a tisane, or herbal tea, made by brewing cinnamon bark in hot water. Photo Credit: Shutterstock

A number of organic compounds found in cinnamon may have antiviral, antifungal, and antiseptic effects. This makes cinnamon tea one of the best beverages for improving immunity; these antioxidants might help neutralize and remove foreign pathogens and materials that could cause infection or illness in the body. This is particularly valuable for the stomach, where so many of these pathogens can be found. [8]

Cinnamon, as mentioned, may have a high concentration of powerful antioxidants, including the active ingredient, cinnamaldehyde, as well as catechins, cyanide, and other important compounds. These antioxidants may prove to be ideal for neutralizing free radicals, the dangerous byproducts of cellular metabolism, and preventing oxidative stress throughout the body. This means that cinnamon tea may assist and even have a preventative effect on chronic illnesses that become more common as we age. [9]

Studies have shown a plausible improvement in gastrointestinal health in subjects who regularly consume cinnamon supplements. Cinnamon, as a digestive aid, may have a stimulating effect on gastric juices and stomach acids. This makes digestion more efficient and effective, leading to lower chances of gas, constipation, bloating, cramping, and stomach upset. Inflammation of the bowels, caused by IBS and other conditions, may also be lessened – if not avoided – by the regular intake of cinnamon tea. [10]

Research has found that cinnamon is not only important for the body but may also be for the mind. Particularly in older generations, cinnamon is thought to improve cognitive speed, boost concentration and focus, and even stimulate the growth of new neural pathways. According to the Journal of Alzheimer’s Disease, further studies are needed to provide clinical evidence for the beneficial effects of cinnamon in Alzheimer’s and other degenerative neural conditions. [11] [12]

Throughout the body, inflammation can take on many forms, from itchiness and irritation on the skin or in the throat, to aches and pains throughout the joints and muscles. Cinnamon tea has been shown to reduce inflammation and pain in many cases, making it a soothing and relaxing remedy for many conditions. [13]

Women who suffer from severe symptoms during menstruation may often be desperate for a reliable remedy that doesn’t impact their hormone levels. Cinnamon has a number of analgesic and anticoagulant effects, meaning that it may help reduce the pain and cramping during menstruation. It might also help reduce the severity of the period, if you tend to have a heavier flow. [14]

How to Make Cinnamon Tea?

Many people are completely unaware of the potential within cinnamon, but this flavorful herb has been used for thousands of years for its health effects. So, how do we make cinnamon tea? Let’s find out. [15] 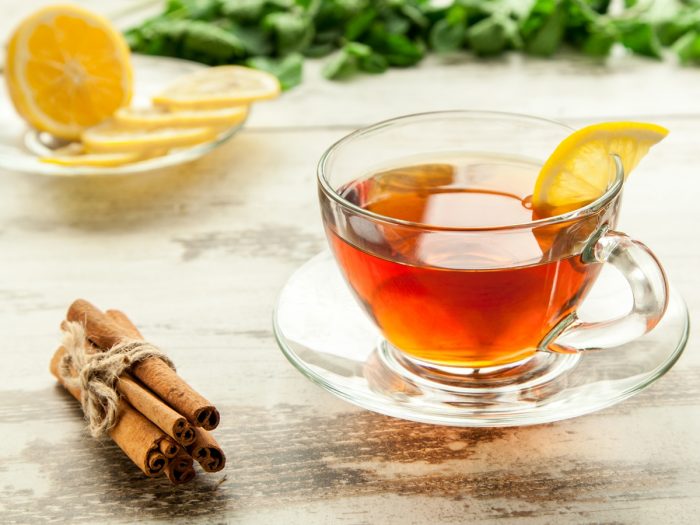 You can add other ingredients like ginger, apples, lime, turmeric or black pepper to enhance the flavor. You can also use black tea (either regular or decaffeinated). Instead of black tea, you can use rooibos or honeybush tea as well. If you would like to add milk to your cinnamon tea, be very careful as it can curdle.

Word of Caution: Cinnamon tea, in spite of having many impressive benefits, has some side effects too. Excess intake of cinnamon tea can be very dangerous for the liver, and can even cause liver failure. This is due to the presence of an active ingredient, called coumarin. While most varieties of cinnamon have safe levels, excessive consumption of Cassia, Saigon, and Korintje cinnamon varieties can be dangerous. Discuss your intake of cinnamon tea with a medical professional to ensure it’s safe for you. [19]

Rate this article
Average rating 4.0 out of 5.0 based on 979 user(s).
Read This Next:
Popular Articles