Ale is a long-lived style of beer with a range of flavors to choose from, making it widely popular in many parts of the world.

Ale is a type of beer, made from grain and produced through a method of warm fermentation. A bittering agent, usually hops, serves as a preservative for this drink and balances out the malty flavor of the fermented grain. The alcoholic content of ale can range from 3-15%.

Historically considered to be an important source of nutrition in Europe during the Middle Ages, real ale is a live drink often containing B-vitamins, antioxidants, and iron. A pint of it contains 110-290 calories, depending on how it is brewed. It is considered a healthier choice than lager beer. In terms of carbohydrate content, real ales will typically have a carbohydrate content of 10 to 20g of carbs per pint. Also, if you are watching your sugar intake, you should know that certain ales may be given an additional flavoring with sugar or honey. [1] [2] 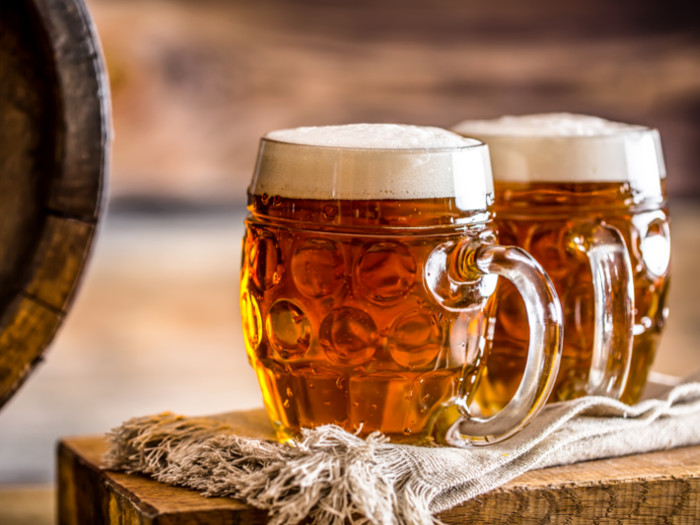 Ales are usually full-bodied with notes of fruit or spice and a hoppy finish. Photo Credit: Shutterstock

There are many different types of ale, including brown, pale, Indian pale, golden, scotch, barley, mild, burton, old, Belgian, and ginger ale among others. Let us discuss them in detail below.

Brown ale tends to have a nutty and sweet flavor. It usually has a low ABV.

Made using pale malts, this is light in color, as well as mellow and fruity in taste.

A hoppier and more bitter variation of the original pale ale, IPA have soared in popularity over the past ten years, leading to a craft beer revolution in America and other beer-producing regions. [3]

Golden ale is a pale ale that is often brewed with lager and should, therefore, be consumed at a colder temperature than your average ale

These varieties are defined as strong, dark amber ales with a malty and slightly sweet taste.

Although long considered a key ingredient for ale, barley has recently been pushed forward in some production methods, making for some rich, coffee, and fruit-flavored beverages. You can visit What is Barley Wine for more details.

The designated drivers’ choice, this young ale usually has a low ABV (between 3 and 3.5%). It is brown in color and has a minimal taste of hops.

This is a classic dark variety originating from Burton-on-Trent in England, with sweet and strong notes.

Originating in England, these are very dark and malty to taste. Also called ‘stock ales’, they were once mixed with mild types of this beer to add flavor. [4]

There is a broad range within this category, but classic Belgian ales tend to be medium-bodied with spicy, floral, and fruity tones.

Ginger ale is a non-alcoholic, carbonated drink that is often used as a mixer for spirits. It can be fermented from a ginger culture, but most major brands add ginger flavoring to carbonated water.

The risks involved with drinking excessive alcohol can be short term such as violence and injuries to long-term health risks such as chronic diseases. According to the Centers for Disease Control and Prevention, people who should not drink alcohol include women who are pregnant, individuals younger than 21 years of age, and people who are recovering from alcoholism or cannot control the amount they drink. Also, it should be avoided by people who are planning to drive or any other activity that required focus and skill. However, different countries have different rules on alcohol purchase and consumption. [5]