The important health benefits of baobab include its ability to boost the immune system, build bone strength, soothe the gastrointestinal system, and lower inflammation. It may also help in reducing blood pressure, stimulating growth and repair, and lowering the risk of chronic disease.

The popularity of baobab fruit and its constituent powder has grown in recent years, due to the high concentrations of nutrients and minerals that it contains.

That being said, let’s take a closer look at its known medical uses and health benefits. 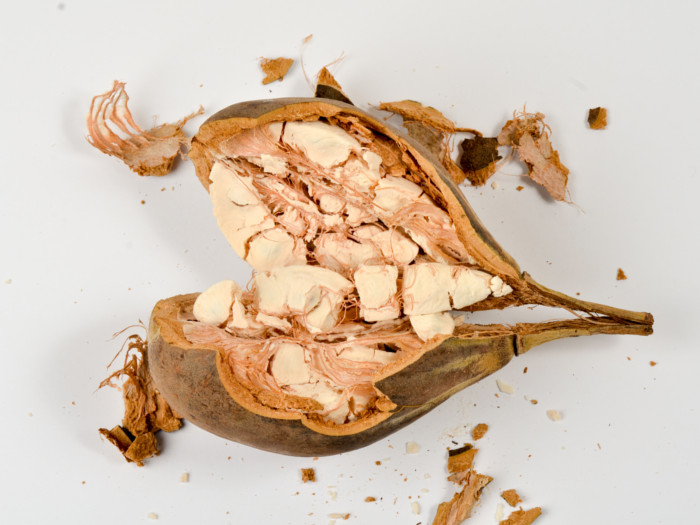 Baobab is used as a natural preservative. Photo Credit: Shutterstock

The most important benefits of baobab are given below:

One of the reasons baobab has been dubbed a superfruit is due to its concentration of certain minerals, including iron. This mineral is a key component of hemoglobin, which transports oxygenated blood throughout our body. This can prevent anemia and provide us with a major energy boost, so baobab fruit in any form can be enjoyed for a quick pick me up! [4]

Potassium is another important mineral constituent of baobab fruit, which is known to be beneficial for heart health. As a vasodilator, potassium is able to ease the strain on the cardiovascular system by dilating the blood vessels and arteries, thus increasing blood flow and keeping the heart from working too hard. Lowering blood pressure can also help fight against atherosclerosis, strokes, heart attacks, and other cardiovascular complications. [5]

The dried powder of baobab fruit is particularly concentrated with minerals, and two of these, calcium and magnesium, are important minerals for bone strength. If you are worried about bone mineral density loss as you age or are already suffering from some of the effects of age-related degradation, adding a baobab supplement to your health regimen is never a bad idea to keep your bones strong and durable into your old age! [6]

Two types of fiber, soluble and insoluble, are present in baobab, which is why this fruit has been trusted as a gastrointestinal aid for generations. These types of dietary fiber can do wonders for the system; in addition to optimizing the digestive process and reducing inflammation in the gut, dietary fiber also helps to regulate glucose and insulin levels in the blood, and even lowers negative cholesterol, thus boosting heart health! There are also certain prebiotic properties of baobab fruit that can improve the bacteria levels in your gut and optimize digestion. [7]

Antioxidants have been a recent buzzword in natural health, and baobab fruit is packed with these free radical-neutralizing compounds. Antioxidant levels can be measured based on the number of oxygen radicals a fruit or food is able to absorb, and baobab does very well in an ORAC test (measuring antioxidant strength). This means that it is able to help prevent a wide range of chronic diseases that may develop when free radicals cause healthy cells to mutate. [8]

Vitamin C is always one of the first compounds noted in a newly discovered fruit, and the immune system-boosting potential of this ancient fruit is definitely a result of the high ascorbic content. Baobab is good for increasing white blood cell count and stimulating the immune system to fight off foreign pathogens, in addition to vitamin C’s antioxidant behavior. [9]

Vitamin C is also a key component of collagen, which we need for the repair and growth of tissues, cells, blood vessels, cartilage, and bone. Baobab is a great source of this vitamin. High levels of ascorbic acid don’t just protect our immune system, but also ensure normal development and appropriate healing times after injuries, illnesses, and surgeries. [10]

There are certain anti-inflammatory compounds found in baobab that can help aid in a number of conditions, from injuries, aches, and pains to stomach upset and respiratory conditions. By reducing inflammation in the body, your immune system can focus on more important tasks, like eradicating pathogens and foreign bodies.

The various parts of this tree have many uses. Let us look at some of them.

The oldest and most majestic trees in the world fall into a very special genus named Adansonia, more commonly known as baobab trees. While there are nine different species of these trees scattered across Madagascar, Africa, Australia, and other parts of South Asia, they are all closely related and share very similar characteristics. They are massive angiosperm trees, with radii exceeding 150 feet and at times, standing more than 50 feet in height. The fruit, however, often gets less attention than it should, as this fruit has been considered a superfruit by some cultures for generations. [11]

Side Effects of Baobab

There are certain side effects of baobab that can be harmful. They are as follows:

Nutrient absorption: The Ecology of Food and Nutrition journal has published a study in 2003, which found that baobab seeds contain certain antinutrients like phytates and tannins. These antinutrients, when consumed in large quantities, can reduce the nutrient absorption and availability in your body. [12]

Harmful fatty acids: Baobab oil contains cyclopropenoid fatty acids (CPEFA), which can cause many health problems as these acids obstruct the smooth process of fatty acid synthesis in your body. However, studies also suggest that the processing of this oil can lower the amount of CPEFA in it. [13] [14]

Baobab supplements should only be taken as directed, as the strong concentrations of organic compounds and other substances can be irritating to the body in certain ways. There is not much research on the effects of this fruit for pregnant and breastfeeding women. It is suggested to speak to a medical professional before making major changes to your daily or weekly dietary regimen.

Rate this article
Average rating 4.0 out of 5.0 based on 196 user(s).
Read This Next:
Popular Articles