The most important health benefits of allspice may include its ability to act as a pain reliever, increase circulation, protect the gastrointestinal system, improve mood, boost the immune system, eliminate fungal infections, lower blood pressure, and reduce inflammation.

This powerful spice is actually derived from the dried fruit of the pimento tree, which is why it is commonly called Jamaica pepper, pimenta, or pimento, among other geography-specific nicknames. Native to Central America, parts of the Caribbean, and Mexico, the allspice bearing tree has the scientific name of Pimenta dioica and might have gradually spread throughout the world due to its unique flavor and its healthy quality. The name allspice is because of the dried brown berries (which look like large peppercorns), smell and taste like a mixture of cinnamon, cloves, and nutmeg. The berries are picked when they’re ripe and allowed to dry in the sun, ending up as the slightly shriveled, hard berries known as allspice. These can then be ground up into spice for culinary use, or the essential oil can be extracted. [1]

Allspice is a key ingredient in Caribbean cuisine, particularly in Jamaica, but it may also have been adopted by many other cultures around the world, including the Middle East and parts of North America. This spice can be used in sweet or savory dishes and is commonly found in desserts, chilis, soups, meat dishes, sauces, curries, and even certain types of liqueurs. The flavor is certainly unique, but what makes this spice even more intriguing might be the high concentration of beneficial nutrients and organic compounds, such as eugenol, quercetin, and tannins that result in some impressive health benefits of allspice. [2] 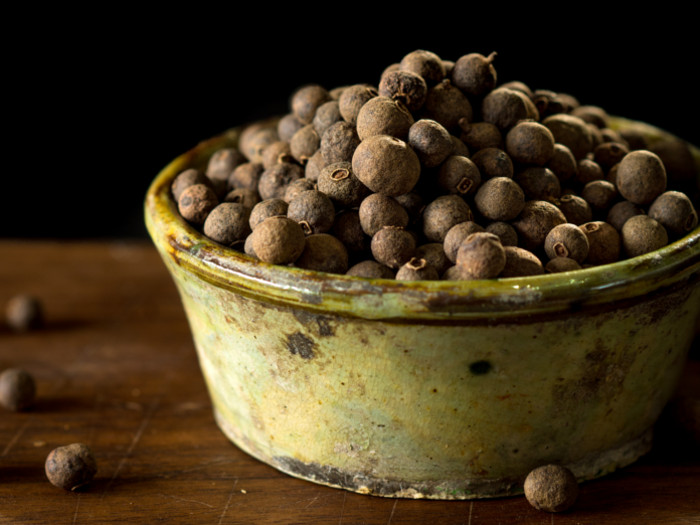 Health benefits of allspice include:

One of the most celebrated aspects of allspice might be its ability to lower inflammation and alleviate pain in parts of the body. The active ingredients in the spice may have chemical compounds that eliminate inflammation, making it an ideal spice to give you some relief from arthritis, gout, muscle aches, or even hemorrhoids. It may also have certain analgesic components that allow for pain reduction in the case of injury or surgical recovery. [4]

The calming, rubefacient effects of allspice’s organic components might make it perfect for soothing the stomach and also facilitating healthy digestion. The eugenol found in allspice may eliminate digestive issues such as diarrhea, nausea, vomiting, and constipation, while also stimulating regularity, which reduces bloating and excess flatulence. The anti-inflammatory aspect of allspice could further ease cramps, which can ease the entire process of digestion. [5]

Research may have shown certain antibacterial and antifungal effects of allspice, particularly in terms of stomach bacteria (E. coli and Listeria monocytogenes). In addition to helping the gastrointestinal system function smoothly, it might also protect it from outside attack through a natural immune response. Furthermore, when allspice is added to certain foods, it might neutralize the bacteria at that level, before it ever enters your body to begin doing damage. [6]

May have Antioxidant Capacity

The presence of eugenol, quercetin, tannins, and other chemical compounds can make allspice a very potent antioxidant, as many of those substances are perfect for neutralizing free radicals and eliminating them from the body. Free radicals are the harmful byproducts of cellular metabolism that can cause healthy cells to mutate, often leading to serious diseases – even cancer. The high level of vitamin C and vitamin A present in allspice might also contribute to this antioxidant activity. [7] 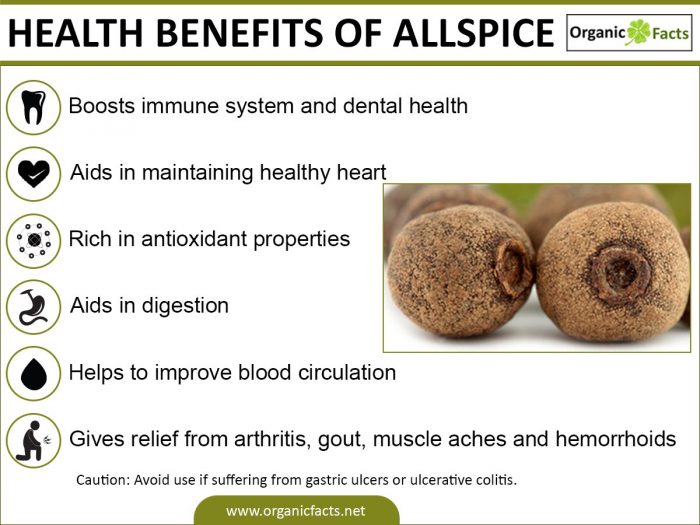 Allspice may help increase the flavor of food

The antimicrobial, antibacterial, and antiseptic aspects of allspice can help to boost your dental health; although gargling with this spice wouldn’t be particularly pleasant, it may have been connected to healthier dental and gum health by protecting against bacterial pathogens. [8]

With significant levels of copper and iron, allspice might be ideal for boosting circulation, as these are essential components of red blood cells. Furthermore, the rubefacient aspect of the spice can be a stimulant and warm the body. Combined with increased blood flow, this can result in additional energy and the proper oxygenation of extremities in the body. Iron also functions in the creation of certain enzymes that are crucial for overall metabolism. [9]

The potassium found in allspice may have a positive effect on heart health, as it is a vasodilator and releases much of the tension on the cardiovascular system. This can cause an increase in blood flow through the relaxed blood vessels and reduces the strain on the arteries and heart, thereby lowering the chances of developing atherosclerosis, and subsequently, strokes and heart attacks. [10]

Word of Caution: Although it is clearly a healthy, beneficial spice, it could cause serious allergic reactions in hypersensitive individuals. Also, if you have existing gastric ulcers or ulcerative colitis, it might be best to avoid using this spice, as it can exacerbate the conditions. As always, before making any major change to your diet or trying out new things, consult a medical professional to make sure the effects won’t be negative.

Rate this article
Average rating 4.0 out of 5.0 based on 202 user(s).
Read This Next:
Popular Articles