The most important health benefits of baptisia include its ability to improve gastrointestinal health, boost the strength of the immune system, protect the respiratory system, improve oral health, reduce inflammation, and act as an analgesic.

Throughout the wide plains and grasslands of eastern and southern North America, you can often find a small flowering plant with purplish-blue flowers. This is actually one of the many species in the Baptisia genus, which is a member of the legume family. While this plant is a food source for some types of animals, it is far more famous for its herbal potential, and it has been used in alternative medicine for hundreds of years by indigenous people and herbalists. It is also widely used by farmers who keep horses, as flies do not care for the smell, so a bundle can be attached to a horse’s harness to prevent these insects from annoying or infecting these animals. The powerful health effects of baptisia are attributed to the unique mixture of organic compounds and chemical components found in its root. [1]

The root can be dried and then powdered into an herb, but now it is also accessible in a supplement form. The plant has also been found in Europe for hundreds of years, specifically by herbalists looking for alternative treatments for chronic illnesses. The root’s powerful components have laxative, antioxidant, antiseptic, emmenagogue, and anti-parasitic effects, amongst others. Now, let’s take a more in-depth look at the health benefits of baptisia. [2] 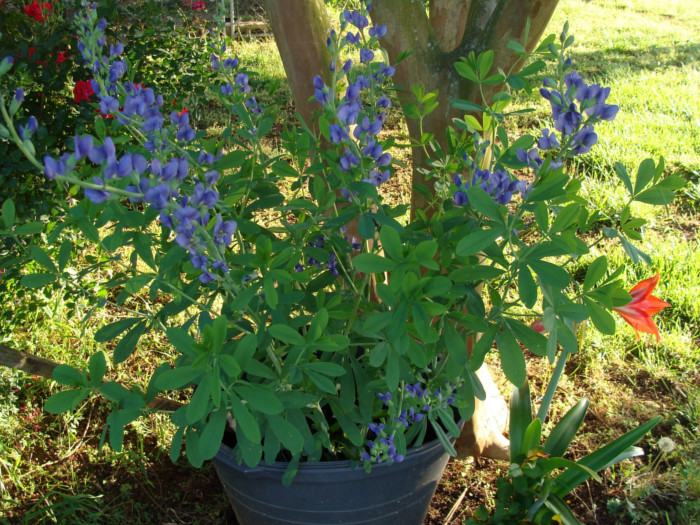 Health benefits of baptisia include:

Those who have ever suffered from an ulcer know that it can be extremely painful and difficult to treat, so a natural solution is obviously quite valuable. In traditional medicine, baptisia was frequently used to treat gastric ulcers, due to its anti-inflammatory abilities and specific antioxidant effects that caused a reduction in the size of ulcers and helped to prevent their further development. [3]

The major effects of baptisia are related to the immune system, particularly when it comes to the treatment of infections. Baptisia has long been relied on to clear up infections of the mouth, gums, and throat, as the potent concentration of antioxidant and anti-inflammatory components is able to quickly alleviate discomfort and eliminate any dangerous pathogens or bacteria present in those bodily systems. [4]

Studies have also shown that the immunomodulatory effects of baptisia on the proliferation of white blood cells can help in strengthening your immune system, which is a very exciting development in alternative medicine. [5]

Although this may seem to fall under the category of the immune system, the powerful effects that baptisia has been shown to have on the common cold and influenza deserve its own classification. If you have a weak immune system and are frequently ill, then adding baptisia herbal supplementation may be a wise choice. [6]

If you are suffering from a sore throat or an inflamed respiratory system, which often happens with conditions like bronchitis or the flu, baptisia can act as an expectorant, eliminating mucus and phlegm that can build up in your respiratory tracts and catch bacteria and pathogens. The anti-inflammatory effects of baptisia can also help to reduce irritation in the tracts and speed the healing process following a respiratory illness. [7]

It can be difficult to treat certain organ systems of the body, and baptisia cannot always do it alone. This herb is commonly combined with other herbal substances, such as pokeroot and cleaver, for issues of the lymphatic system, such as inflamed lymph nodes, which is often the sign of an infection. Again, the natural antiseptic and antibacterial nature of baptisia can help prevent these small issues from progressing into something more serious.

Although skin ulcers are not the most common form of this condition, they do occur and need to be treated. Topical application of the baptisia herb can help to alleviate this condition and treat the underlying cause as well. In terms of other skin conditions, such as irritation, age spots, wrinkles, and blemishes, baptisia can also be used to soothe inflammation. [8]

If you have concentrated pain in any area of your body, you can topically apply baptisia and the analgesic properties of the herb will take over. In traditional medicine, this was commonly done to the nipples for women with sensitivity in that area. This can also be used for those with wounds, post-surgery pain, and arthritic symptoms. [9]

Many people have poor oral health but don’t even know about it, as it is often only evidenced by bad breath, minor pain, or some bleeding while brushing. Baptisia is particularly effective at treating oral conditions like gingivitis and infections of the teeth and gums.

Word of Caution: This is a very powerful herb, so be careful not to consume too much. An overdose of baptisia can result in severe vomiting, nausea, diarrhea, and difficulty breathing. Also, if you’re pregnant or breastfeeding, it isn’t suggested to use baptisia, as research has not been able to show this as definitively safe. As always, when adding an herbal element to your daily or weekly health regimen, speak to your trained medical professional first.

Rate this article
Average rating 3.9 out of 5.0 based on 121 user(s).
Read This Next:
Popular Articles