Burdock Root Tea- Benefits, How to Make, & Side Effects

Burdock root tea has a long list of health benefits such as detoxifying the body, healing the liver, preventing chronic disease, reducing inflammation, boosting the immune system, healing respiratory infections, improving hair health and soothing stomach disorders. Some of the side effects of drinking this tea include uterine contractions, as well as allergic reactions in the form of contact dermatitis. Burdock root toxicity can occur when consumed in high doses and may include dizziness, headache, dry mouth, sweating, fever, and slurred speech. Again, when this tea is taken in moderation, it is widely considered a safe and beneficial health tonic.

What is Burdock Root Tea?

This popular herbal tea is scientifically known as is made by steeping the dried root of the burdock plant, which has the scientific name Arctium lappa. It has been in use for hundreds, if not thousands of years, as a traditional medicine in parts of Europe, Asia, and North America. It is also cultivated in many areas due to the medicinal and nutritional properties of its roots, leaves, flowers, and stems. Burdock root can also be cooked and eaten as a root vegetable, but similar nutritional properties can be gained when it is brewed into a tea. Most of the benefits of burdock root tea come from the significant levels of luteolin, quercetin and other antioxidants, as well as vitamin B6, folate, potassium, magnesium, manganese, phosphorous, calcium and iron.

In traditional use, burdock root tea was commonly turned to for its diuretic and diaphoretic effects, meaning that it caused sweating and urination in people who drank it. This helped to purify the blood and detoxify the body, as sweating and urination are both ways for the body to expel excess toxins, salts, and water, thereby relieving stress on the liver, lymphatic system, and kidneys. 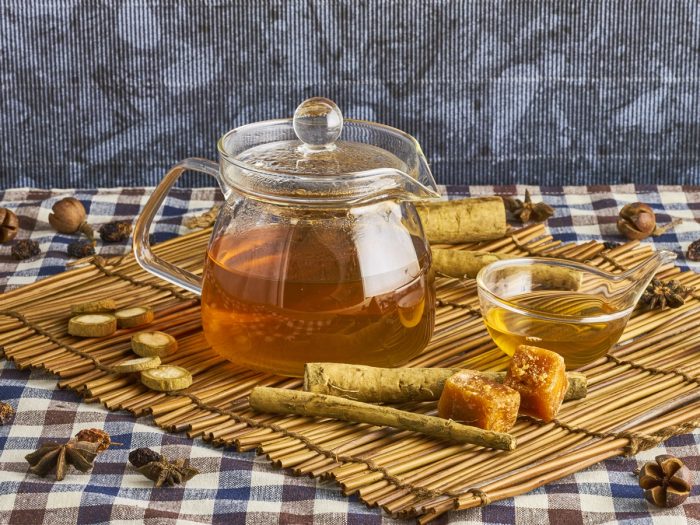 High potassium levels found in burdock root tea mean that this herbal beverage is excellent for heart health, as it can reduce strain on the cardiovascular system by lowering blood pressure. Potassium not only regulates the fluid balance in the body but also acts as a vasodilator, helping to prevent atherosclerosis, heart attacks, and strokes.

Amongst other pharmacological activities, the burdock root has exhibited properties like antimutagenic and antitumor. This was highlighted by an analysis published in the Asian Journal of Chemistry. Additionally, the paper also acknowledges the presence of polyphenols, which are known to exhibit significant anticancer potential.

Another study has pointed out that roasting treatment on burdock root tea has been observed to increase antioxidants, thus enhancing the antioxidant activity.

Notable levels of vitamin C in this root tea help to stimulate the immune system and the production of white blood cells, while also boosting collagen production and speeding the healing and recovery process following an illness.

A number of studies have shown that burdock root tea can help speed the regrowth process of liver cells following serious diseases, such as cirrhosis and hepatitis. The liver is a precious organ that can be easily damaged, making this brew very important to individuals with blood-borne diseases or alcohol-induced damage.

The phytosterols found in burdock root tea, as well as the essential oils in the root, can prevent hair loss and improve the health of the scalp and follicles, eliminating dandruff and other common issues.

In natural health traditions, burdock root tea was often recommended for people suffering from headaches, fever, aches, pains and joint disorders. This is due to the anti-inflammatory nature of this herbal tea, and people still turn to this brew for similar conditions. For those with gout, research has shown that the compounds in burdock root tea can decrease levels of uric acid in the blood, improving this condition.

This herbal tea has both, expectorant and decongestant properties, so if you’re suffering from a cough, cold or flu-like symptoms, a cup or two each day can help cut through the phlegm and mucus, while the antibacterial nature of the tea can attack the underlying infection to speed healing.

How Do You Make Burdock Tea?

Making burdock root tea is quite simple, provided you have access to fresh burdock root. You may also purchase burdock root tea that has already been shredded and roasted, and therefore ready to brew. Let’s take a look at the step-by-step procedure to make burdock tea.

Burdock tea is a herbal tea that can help you cleanse your body of all the toxins. So if you have partied hard the previous night and want to detoxify the next day, this the beverage you must have! So let's take a look at how to make this potent tea at home.
5 from 1 vote
Print Pin Rate
Course: Beverage
Cuisine: Japanese
Appliance: Stove
Prep Time: 45 minutes
Cook Time: 15 minutes
Total Time: 1 hour
Servings: 2 cups
Author: Ishani Bose

Burdock tea has a soothing and pleasant flavor. You may find its smell quite strong and you may even find its taste to be sweet and crisp, but you may add a bit of honey or lemon juice to improve the flavor if you don't find it palatable.

Some of the notable side effects of burdock root tea include allergic reactions, negative interactions for pregnant and nursing women, and possible toxicities if the roots have been contaminated or are consumed in too high a concentration.

Marijuana Unsafe For The Heart, Need For More Research

While marijuana is claimed to have a positive effect on one’s health, there seems to be a lack of scientific research to back it up. Citing this lack of…

Promises are declarations or commitments made on the basis of faith and trust. It is not uncommon for parents to use this as a way of instilling values in…