Burdock is a wonderful herb known for its numerous health benefits which include, aiding in digestion, detoxifying the liver, and balancing hormones. It is also good for improving skin quality, reducing inflammation, and lowering blood pressure.

Burdock is the name of a genus of the flowering biennial, whose scientific name is Arctium. Remember the small burrs that often get stuck on your trousers or socks when walking in a forest? Those small hooking burrs come from the burdock plant, whose plants, leaves, and stems hold significant value as herbal or alternative remedies. [1] [2]

Burdock root can be eaten in large quantities as a root vegetable and is very rich in important fibers. The dried leaves and seeds can also be used to extract burr oil, which has a wide range of medicinal uses.

The first use of burdock root is recorded in the medieval period, but it is also known in Chinese herbal medicine, and likely dates back considerably further. There are a number of ways to prepare this flowering plant, as either a food or herbal medicine, making it highly sought after around the world, as several species have spread globally. 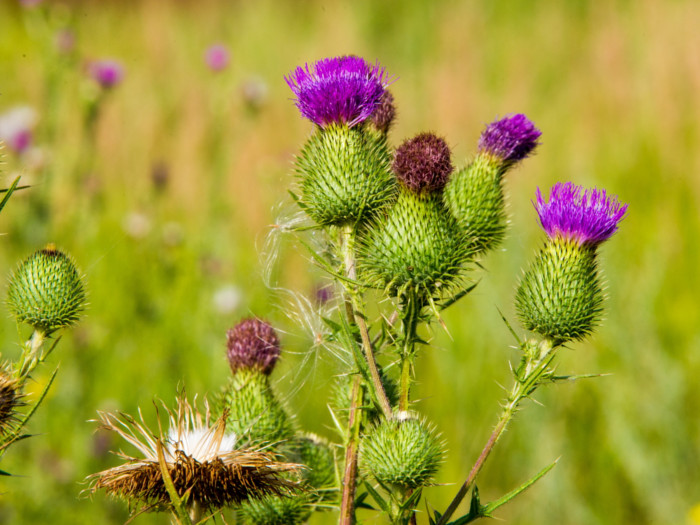 Burdock root is a powerhouse when it comes to the nutrition profile. According to USDA, it provides energy, carbohydrate, protein, and fiber. Amongst minerals, it contains calcium, potassium, magnesium, phosphorus, and selenium. It is a good source of vitamins that include vitamin C, B vitamins, choline, vitamin E, and vitamin K. [3]

It also provides amino acids that include the following:

Let’s take a closer look at the impressive health benefits of this herbal plant.

One of the aspects of burdock that doesn’t get enough attention is its impressive ability to lower blood pressure. The plant’s high concentration of potassium, a vasodilator, helps relieve tension within the cardiovascular system by relaxing the blood vessels and arteries, thereby helping to prevent atherosclerosis, heart attack, and stroke. [5]

The most well-known use of burdock is as a digestive aid for many reasons. The high concentration of fiber in it helps stimulate the digestive system and moves food smoothly through the bowels, thereby relieving constipation and preventing bloating, cramping, and ulcers. Inulin, a particular type of soluble and prebiotic fiber found in burdock root, is able to reduce inflammation in the gut and eliminate many types of harmful bacteria that can cause diarrhea and gastrointestinal problems. [6]

Although all types of fiber are able to regulate the balance of insulin and glucose in the body, inulin is particularly effective and has been directly connected to reducing the development and severity of diabetes and diabetes-related symptoms. An animal study found that burdock extract has a hypoglycemic effect, helping in the management of lipid profiles and enzyme levels in people with diabetes. In fact, it was used in Iranian traditional medicine for this purpose. [7]

The chemicals that give burdock its bitter taste, also stimulate bile production and digestive juices in the gut, which helps the liver to rapidly process toxins and flush them from the system. Clearing toxins from the blood is one of the main purposes of the liver, and burdock’s organic compounds and components have been directly linked to improving this function. [8]

One of the most common side effects of constipation, high toxicity in the blood, or poor dietary habits is skin inflammation, manifesting as spots, pimples, acne, rashes or discoloration. Many herbalists recommend burdock root supplements and herbs for the treatment of skin conditions, as this powerful herb can solve the underlying problems of toxicity or constipation in a fast and efficient way, leading to clearer, healthier skin. [9]

Having a hormone disorder can be destructive and difficult. To avoid that, you should add foods and herbs to your diet that can regulate hormonal activities in the body. Burdock is able to help the liver metabolize certain hormones, like estrogen, which can rebalance the body’s hormone levels. Excess estrogen is the cause of various dangerous or even deadly hormonal disorders, so adding some burdock root to your weekly diet is never a bad idea! [10]

It has significant levels of vitamin C and vitamin E, both of which act as antioxidants in the body to eliminate free radicals, which means that burdock is a major booster of our immune system. These antioxidants have been linked to preventing infections, lowering one’s risk of cancer, supporting proper growth, and repairing the body’s cells and tissues. [11]

Word of Caution: Though this is rare, there are limited allergies associated with consuming burdock. Consult a doctor before adding it to your health regimen. Also, for those using potassium-sparing diuretic therapy, eating too much of this herb (with its significant levels of potassium) may aggravate the system and result in potassium toxicity. As always, everything should be consumed in moderation.

Rate this article
Average rating 4.0 out of 5.0 based on 620 user(s).
Read This Next:
Popular Articles