Are Clove Cigarettes Good or Bad

Clove cigarettes are popular in many parts of the world, and some believe they are a healthy alternative to cigarettes, but there are several negative aspects to these cigarettes that must be considered.

What Are Clove Cigarettes?

Clove cigarettes contain approximately 60-70% tobacco and 30-40% shredded cloves and have a sweeter flavor that some people prefer. Another word for clove cigarettes is kretek, which is a word that mimics the sound of burning cloves. Unlike traditional cigarettes, which are a mixture of dried tobacco leaves, along with a huge amount of addictive additives and potentially cancer-causing chemicals, clove cigarettes have less tobacco but are no less dangerous. These cigarettes are incredibly popular in Indonesia and other neighboring countries but are also considered as novelty cigarettes in other countries around the world. Cloves (the herb) are a spice that has many health benefits, which is where much of the confusion occurs. People often mistakenly believe that the inclusion of smoking shredded cloves will offset or even supersede the negative aspects of smoking tobacco. However, this is simply not true. [1]

Smoking clove cigarettes, regardless of what anyone has told you, is just as dangerous as smoking normal cigarettes. This is because the smoking of any tobacco products can be addictive and harmful to your health. Whether it is 100 percent tobacco or 60 percent tobacco, you are still inhaling the better part of 4,000 individual chemicals in that tobacco smoke, including nicotine, tar, carbon monoxide, ammonia, cyanide, hydrogen and many more. In short, there are many dangerous aspects of clove cigarettes that you cannot afford to forget, regardless of how novel or flavorful they may appear to be. [2] 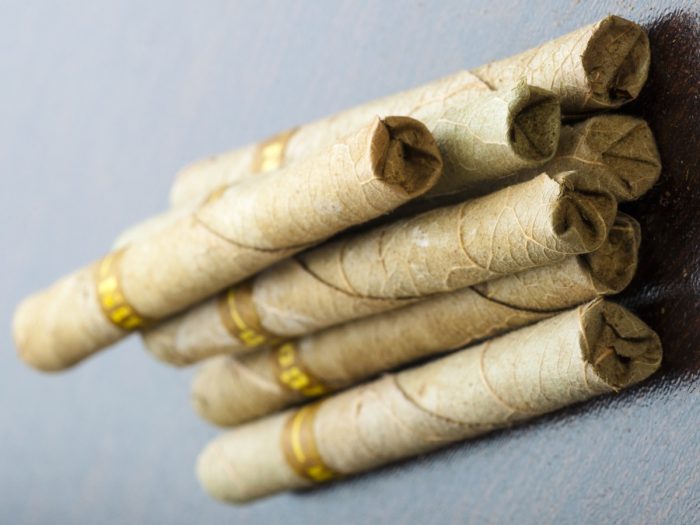 Clove cigarettes are mistaken as a healthier alternative to regular cigarettes, but they are just as bad. Photo Credit: Shutterstock

Are Clove Cigarettes Good or Bad?

Clove cigarettes may have less tobacco in each cigarette, but they should not be considered “safe”, by any means. Cloves also contain an active ingredient that traditional cigarettes don’t contain – eugenol. This is a phenylpropene that is a part of clove oil, and when used topically or internally, it can be a very beneficial element. However, when it is smoked, as in clove cigarettes, the same soothing or anesthetizing effect occurs in the lungs and the airways.

By numbing these tissues, eugenol can inhibit the gag reflex or the natural protective instincts of the respiratory system. This apparent “cooling” effect of eugenol can make it easier to take longer, deeper drags on a clove cigarette without your lungs reacting (e.g., coughing and expelling the smoke). This can allow clove cigarette smokers to get a bigger “buzz” off their cigarette, but it can also increase the damage being done to the lungs with every long drag. Furthermore, eugenol is known to cause allergic reactions, respiratory infections, or inflammation within the respiratory tracts in certain people. [3]

Aside from this unique eugenol issue, all the evidence points to clove cigarettes being just as indicative of heart issues, pregnancy complications, blood pressure, and cancer, as a result of the majority tobacco content in these cigarettes. [4]

The final dangerous aspect of clove cigarettes is their marketing strategy, banking on their sweeter flavor to draw smokers who are looking for a “lighter” cigarette that might help them quit. This sweet angle was also used as a hook for younger smokers, which is why the United States banned these cigarettes back in 2009. The fact is that smoking cloves may seem like a better option, or an appealing/cool habit to pick up as a youngster, but it is just as dangerous to your health, and the health of those around you, as a traditional tobacco cigarette.

Rate this article
Average rating 3.6 out of 5.0 based on 86 user(s).
Read This Next:
Popular Articles