Being pregnant can be a difficult time for many women, particularly because there can be many complications, some of which can be difficult to avoid. If you think that your pregnancy is anything but normal, it is very important for you to consult your doctor immediately, and take all necessary steps for preventing or treating the most common pregnancy complications.

The most common pregnancy complications include preeclampsia, bleeding, ectopic pregnancy, gestational diabetes, placenta previa, and nausea, among others. Informing yourself of these risks, and taking proactive steps to prevent or treat them is essential for the health of both the mother and child.

When a pregnancy ends on its own, prior to the 20-week mark, it can be physically damaging and emotionally devastating. If any blood, tissue or other bodily fluids pass out of the body in notable amounts, it could be a sign that you have experienced a miscarriage and have lost the baby. This process is irreversible once it has begun, and occurs in roughly 10-20% of pregnancies, sometimes before a woman even realizes that she is pregnant. [1]

While the gestational period for most babies is around 40 weeks, there are a few factors that can cause preterm labor, which is basically your body trying to give birth before it is an appropriate time. Some of the risk factors for this can be bearing multiple children at the same time, smoking, being overweight, or having a history of preterm labor in earlier pregnancies. If you detect any symptoms of preterm labor, such as a backache, unexplained nausea, vaginal bleeding or pressure in the groin, speak to your doctor or midwife immediately. 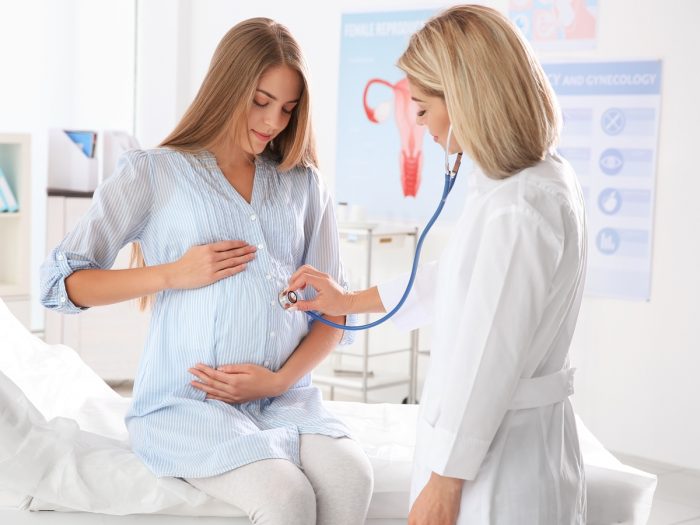 This is one of the most dangerous pregnancy complications, as it can necessitate a preterm delivery in some cases. Mild preeclampsia may only include high blood pressure and protein in the urine, but more severe forms of preeclampsia can have a range of side effects that include shortness of breath, dizziness, blurred vision, nausea, vomiting, and headaches. [3]

Many women experience gestational diabetes, even if they are not at a high-risk of diabetes before pregnancy. This condition is typically temporary, and will often disappear within a few weeks of delivery. The cause of gestational diabetes is the body trying to take care of the growing baby, namely the body’s increased insulin sensitivity so additional glucose is available to nourish the baby. If this insulin resistance becomes a larger problem, gestational diabetes may arise, meaning that you will need to alter your pregnancy diet. [4]

An ectopic pregnancy is one in which the egg doesn’t implant on the wall of the uterus, but instead settles in a different part of the woman’s reproductive system. This will often happen in the fallopian tube, which doesn’t have nearly enough room for a fetus to develop. When this incorrect implantation occurs, there is no way to reverse the effects, and the pregnancy must be treated (and consequently terminated) for the good of the mother’s health. Ectopic pregnancies occur in roughly 2% of pregnancies. [5]

In this medical condition, a woman’s uterus is positioned lower than in most pregnancies, which partially blocks the cervix. When you suffer from this condition, it is not necessarily dangerous for you or the baby, but it may be required that you have a cesarean section to make delivery easier, as the cervix is what must dilate before childbirth. Some of the common symptoms of placenta previa include bright red, painless vaginal bleeding throughout the pregnancy, particularly in the second and third trimesters. [6]

Bleeding during pregnancy isn’t uncommon, particularly light bleeding or spotting in the first few weeks following conception when the egg attaches itself to the wall of the uterus. This implantation often leads to light bleeding, which is a concern for many women. Occasional bleeding at other points in pregnancy, particularly in the second and third trimester, may be an indication of many other issues, so you should discuss any instances of bleeding with your doctor as soon as possible. [8]

Morning sickness is a very common symptom of pregnancy and affects the majority of women at some point in their pregnancy. This can be caused by the shift in hormones within the body, and will often stop after the first trimester. However, nausea and vomiting may last longer into the pregnancy for some women, and since this can indicate more serious problems, it is best to speak with a doctor if you are vomiting and nausea continues into your second or third trimester. [9]

This disease can affect women who have Rh-negative blood and conceive a child with a man who has Rh-positive blood. The mother’s body won’t recognize the foreign blood platelets and will develop antibodies in response. Fortunately, most babies are born before these antibodies are produced in large numbers, but this disease can affect subsequent pregnancies, as the antibodies may cross into the fetus, causing more pregnancy complications. [10]

There are quite a few types of pain you will experience during pregnancy, from cramping due to the growth of the baby to back pain that may be caused by pinched nerves. While a certain amount of pain and discomfort during pregnancy is normal, it is you who knows your body better than anyone. If a pain seems acute and sudden and doesn’t go away with rest, icing or changing position, it may be time to speak with your doctor about what it could mean for your pregnancy. [11]

Rate this article
Average rating 3.7 out of 5.0 based on 15 user(s).
Popular Articles