Commonly known as Granny’s Bonnet or Columbine, the genus known as Aquilegia  [1]actually consists of approximately 70 species of perennial plants that have been used as both a medicinal substance and a food source by Native Americans throughout the northern hemisphere. It is typically found in high altitudes in open meadows and woodlands, and are easy to identify due to the spurred petals of the flower, which look somewhat like a claw. There are many herbal remedies and traditional uses of this versatile plant, including the flowers, seeds, and root, but there is considerable danger in ingesting the seeds in large quantities, as they contain cardiogenic toxins that can affect the cardiovascular and gastrointestinal systems. The utmost care should be taken when turning to columbine for its medicinal benefits, and you should only trust columbine that has been acquired from a reliable and trained herbalist.

You can use tinctures and decoctions of columbine for a number of health benefits due to its diuretic and astringent properties, as well as the unique combination of organic compounds it contains. While the seeds and roots can be used in other ways to achieve certain benefits, there is an increased risk with these sorts of traditional remedies. Now, let’s take a closer look at some of the important health benefits of columbine. [2] 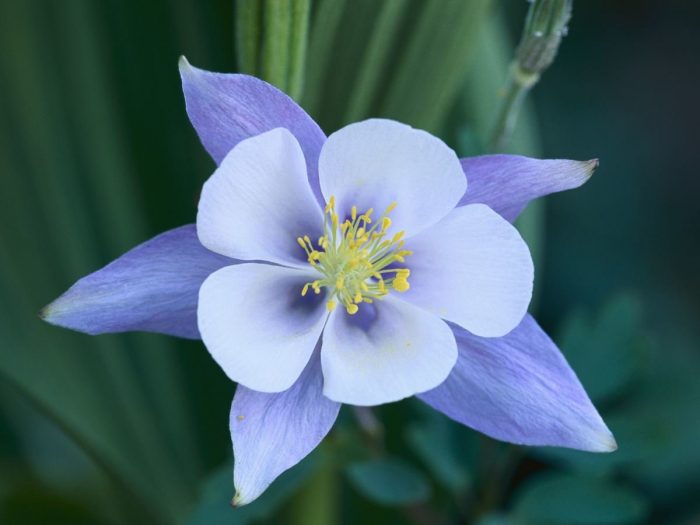 For thousands of years, columbine has been used by the indigenous populations of North America and Europe to treat a variety of skin conditions. You can crush the seeds or roots and combine them with water to create a paste or salve that can be placed directly on rashes and irritation. The anti-inflammatory nature of columbine helps to reduce the irritation and redness of these affected areas. It is also effective for mild acne, psoriasis, and poison ivy, as well as other plant-derived rashes. [3]

Columbine also works as an effective pain reliever on various parts of the body. The same sort of paste can be applied to bruises and strained muscles to reduce aches and pains, as a result of the same anti-inflammatory compounds found in the roots and seeds. Lotions made from the crushed root and the extracted oils is very popular for rheumatic pains as people age. Those suffering from arthritis can use these herbal lotions to significantly reduce their discomfort. Using columbine on open wounds is discouraged, as the toxicity could negatively affect the body if it gets into the bloodstream. [4]

One of the most popular uses of columbine has been in the reduction of headaches. Using tiny amounts of crushed seeds and often mixing them with wine or water, headaches can quickly be relieved. Again, the seeds contain toxic substances, so very small amounts are necessary for this treatment, and consulting an herbalist is highly recommended. [5]

Crushing the roots and mixing them with water has also been used as a treatment for certain respiratory problems, including congestion and sore throats. By eliminating the inflammation of the respiratory tracts, columbine can help to speed up the healing process, reduce irritation, and eliminate congestion, which prevents further illness or infection from bacteria in the phlegm and sputum. [6]

Columbine has long been used to stimulate perspiration, and is known traditionally as an effective remedy to break a fever. If you mix the flowers with water and drink this mixture, fevers can be rapidly eliminated. This same property also induces urination, so its role as a diuretic makes it valuable for detoxifying the body. By stimulating the elimination of excess toxins, salts, fats, and water, columbine helps relieve pressure on the kidneys and liver. [7]

If the roots are prepared correctly, they can be consumed as a tonic for the stomach, as it can ease inflammation and irritation in the bowels that causes diarrhea and symptoms of IBS (Irritable Bowel Syndrome). It should be consumed in small quantities and prepared by a trained herbalist. [8]

The effects of columbine on women have been known for generations. A small tincture can be used to induce labor in pregnancy, and its properties as a coagulant and astringent can help to reduce bleeding after delivery. Also, columbine is used by many herbal practitioners to lessen menstrual bleeding and reduce some of the discomfort and symptoms associated with menstruation. [9]

As mentioned many times in this article, columbine is a poisonous flower, so despite all of the health benefits we’ve just explained, you should not try to create decoctions, tinctures, or salves without proper training or consultation with an herbalist or traditional practitioner. Before adding any powerful herbal remedy to your health regiment, always consult a medical professional.

Rate this article
Average rating 4.3 out of 5.0 based on 24 user(s).
Read This Next:
Popular Articles