Ginseng is a broad term that incorporates nearly a dozen different species of plants belonging to the Panax genus. This highly valued plant, which has large fleshy roots is typically found in North America and certain cooler areas of Asia. The light-colored, fleshy root is the most medicinally valuable element of the plant and can be purchased in dried, whole, or sliced form. The green, oval leaves are used on a far more limited basis, but they do have some uses. [1]

Ginseng root can be consumed orally, or it can be included in supplements, energy drinks, beverages, teas, and other forms. Ginseng tea is also a widely known and used beverage. [2]

Ginseng contains a compound called ginsenosides, which is responsible for its main medicinal benefits. Other compounds include polyacetylenes such as panaxynol and panaxydol, polyphenolic compounds, arginine, and its derivatives, as well as acidic polysaccharides.

Let’s take a more in-depth look at the health benefits :

A 2013 research conducted at Daejeon Oriental Hospital of Daejeon University throws light on the anti-fatigue effects of ginseng. Polysaccharides and oligopeptides in the American variety can potentially help to lower oxidative stress, fight fatigue, enhance physical activity, and boost energy. [3]

Ginseng stimulates cognitive abilities and neural activity that can be difficult to achieve in older ages. Also, the antioxidants prevent the accumulation of plaque and free radicals in the brain, effectively preventing the onset of dementia, Alzheimer’s, and other cognitive disorders. 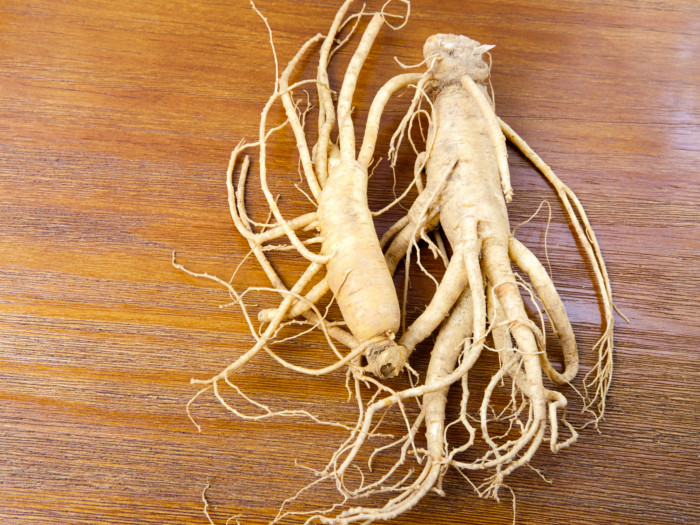 Ginseng reduces alcohol toxicity in the brain by increasing the enzymes that help in alcohol breakdown. Thus, according to a study performed at the Teaching Hospital of Chengdu University of Traditional Chinese Medicine, it has positive effects on acute alcohol intoxication. [4]

Asian ginseng affects the body’s nervous system in various ways, including boosting mood and energy levels. Additionally, the adaptogens found within it have been shown to alter the hormonal levels of the body, which can treat chronic stress. A study led by Jonathon Lee Reay (Northumbria University, UK) published in Human Psychopharmacology shows that it improves aspects of working memory performance in young adults. [5] [6] [7] [8]

Several studies have shown that the ginsenosides in Korean red ginseng have potent antioxidant and anti-inflammatory properties, which help reduce oxidative stress and increase enzymatic activity. It can reduce the inflammation of nerves and improve the motor function recovery after a spinal cord injury. [10] [11] [12]

Applying a cream, which has ginseng as one of its ingredients, to the penis one hour before intercourse and then washing it off right before the intercourse helps prevent premature ejaculation.

It has been linked to managing menopause symptoms by the Journal of Ginseng Research – Elsevier [15]. As a soothing and anti-inflammatory substance, it is often prescribed for women suffering from extreme menstrual discomfort and cramps. It can also help reduce mood swings, hot flashes, anxiety, depressive symptoms, night sweats, vaginal dryness, decreased sex drive, insomnia, weight gain, hair thinning, irritability, and other menopausal changes in the middle-aged women. [16]

One of the most common traditional uses of Indian ginseng (a.k.a. ashwagandha) was as an aphrodisiac. The powdered version was believed to increase male sexual performance and boost libido. Furthermore, a study by Dr. Laura Murphy, et al., Southern Illinois University, shows that it can be used to treat various sexual dysfunction.  [17]

Ginseng’s anti-allergic, antimicrobial and antioxidant properties work as a defense mechanism against various microbial and bacterial infection. In fact, the herb enhances the effect of vaccinations against diseases like influenza, hepatitis C virus, respiratory syncytial virus (RSV), and rotavirus.

Siberian ginseng has fatigue-fighting and vitality-boosting properties. It helps to decrease pain, which is one of the primary symptoms of fibromyalgia. Furthermore, it reduces inflammation and stabilizes the effect of inflammatory cytokines after chemotherapy in children. Also, it helps to heal adrenal fatigue.

The powerful combination of chemicals in this root helps in the suppression of appetite, boost metabolism and burns fat. When the dried or powdered version is consumed, it can quickly suppress the “hunger hormones” from triggering any cravings, thereby helping people in weight loss. [18] [19] [20]

This powerful herb may reduce chronic obstructive pulmonary disease (COPD), a lung disorder, which cause inflammation of the upper airway. This results in congestion, nasal itching, and sneezing. Research published in Elsevier’s Respiratory Medicine reveals that ginseng mixed with other herbs showed promising evidence of improving lung functioning and overall health in individuals suffering from COPD. Ginseng also has the ability to clear bacterial infections from the lungs. [21] [22]

Ginseng shows anticancer properties due to a collective effect of antioxidant, anti-inflammatory, apoptotic, and angiogenic properties, according to research published in International Immunopharmacology. Additionally, the American Journal of Chinese Medicine, the most promising oncological area is in colorectal cancer. Research has shown a potential decrease in colorectal cancer spread and symptoms with regular inclusion in one’s diet. Early research on other types of cancer like breast, skin, lung, liver, and prostate cancer show anti-tumor properties (Kim SJ et al., 2015). [23] [24] [25] [26] [27]

A report published by a team of Canadian researchers in the Nutrition, Metabolism and Cardiovascular diseases Journal suggest that the glucoregulatory properties of ginseng help reduce blood sugar levels in type-2 diabetes patients. Also, another study published in the PLOS One Journal states that the ginsenosides in the herb affect insulin production and improve insulin resistance in the body. [28] [29]

The other benefits are:

All over the world, ginseng is valued for its ability to reduce the signs of aging. Its antioxidant properties prevent the negative effects of free radicals throughout the body, which prevent cellular damage. [30]

One of the natural carbohydrates found in this root has been directly connected with the prevention of alopecia and male pattern baldness. Applying its salves or consuming the spice directly can improve the health of hair follicle beds, prevent dandruff, and reduce hair loss significantly. [31]

It detoxifies and boosts the immunity of the skin. By stimulating blood flow throughout the body, particularly to the skin cells, it makes the skin look young and hydrated. [32]

It is a very powerful spice and can cause negative reactions in the body like:

Note: It is not recommended for pregnant and lactating women.

Avoid the use of the root for more than three months. Remember, everything in moderation! Always consult a medical professional before adding it to your regular diet or supplement regimen.

The types are the Asian and American variety which have the active ginsenosides present in them. However, there are other adaptogenic herbs which are close relatives of ginseng and have similar properties and benefits.

Rate this article
Average rating 3.8 out of 5.0 based on 656 user(s).
Read This Next:
Popular Articles