Cardamom has antimicrobial, antioxidant, and anti-inflammatory properties. It helps in protecting your heart from elevated cholesterol levels and high blood pressure. It also helps manage diabetes and lower liver toxicity. It is used as a carminative for digestive problems as well. It helps alleviate oral health problems like cavities and bad breath.

Cardamom is a spice found in the form of a small pod with black seeds inside. It belongs to the Zingiberaceae or the ginger family. There are two main types or subspecies of this spice. Their scientific names are Elettaria, green or true cardamom, and Amomum, which represents black, white, or red cardamom.

The pods of Elettaria are small and light green in color, and the pods of Amomum are comparatively bigger and brown in color. Both of these are native to the Indian subcontinent.

Cardamom has been traditionally used in Ayurveda and Chinese medicine for many years.

While this article is about green cardamom, you can learn about black cardamom here.

Green cardamom has an intensely sweet, minty, and savory flavor. Both the seeds and the pod have a rich aroma and are often used in desserts, hot and spicy dishes, as well as aromatic beverages like coffee, and tea. It is regarded as the queen of spices and is the third-most-expensive spice after saffron and vanilla.

According to the USDA Food Data Central, cardamom is a source of minerals such as iron, magnesium, selenium, zinc, and manganese. Other nutrients include calcium, potassium, B-vitamin pyridoxine, and vitamin C. It also contains small amounts of protein, dietary fiber, and key fatty acids.

Most impressive of all, cardamom contains natural compounds with antioxidant properties, that are important in preventing many chronic diseases.

Cardamom has been promoted in traditional medicine and suggested in medical research to have several powerful health benefits. The most popular are listed below.

In contrast to ancient herbal treatments against harmful bacteria, modern antibiotics have been found to produce side effects such as inhibition of good bacteria in the intestines. While spices such as cardamom may not be as consistently powerful, they inhibit only infectious microbes, not beneficial probiotics.

This theory was tested in experiments with its extracts. The oils from cardamom were able to inhibit the growth and spread of dangerous microbes that may be a cause of food poisoning.

Studies have also suggested that cardamom has the potential to become an alternative therapy against antibiotic-resistant pathogens.

Cardamom may be protective against many heart conditions.

According to a study published in the International Journal of Molecular Sciences, when male albino rats were administered with 100-200 mg of cardamom extract, there was a significant improvement witnessed in their cardiac and left ventricular functions. This means that the spice helped in regulating blood pressure in these rats.

In an animal study published in the International Journal of Experimental Biology, antioxidant enzymes from cardamom were found to protect the heart from oxidation and control cholesterol levels despite a high-fat diet. 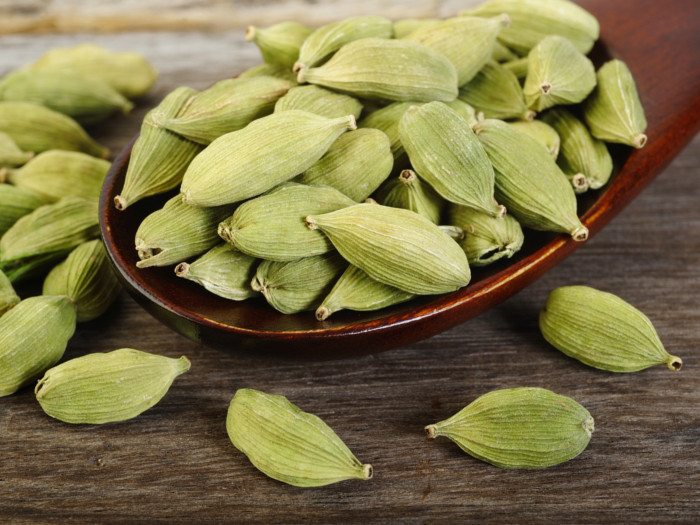 Use cardamom in your coffee for a refreshing boost! Photo Credit: Shutterstock

Evidence suggests that certain compounds in cardamom have antioxidant and anti-inflammatory properties. A 2010 report suggests that black pepper and cardamom extracts help in building a healthy immune system.

Research has found these properties to be protective when inflammation and oxidative stress are caused by unhealthy weight and diet.

Cardamom has been traditionally used in Ayurveda, Chinese medicine, and the Unani system as a remedy for digestive problems. It has carminative and stomachic properties.

The methanolic extract from cardamom is the component that helps in controlling gastrointestinal discomforts such as acidity, flatulence, and stomach cramps.

A study published in the Journal of Ethnopharmacology concluded that the extracted volatile oils from cardamom may have a positive influence on gastric ulcers. It is also found to protect against Helicobacter pylori, the bacterium linked to stomach ulcers, says a study published in the Phytotherapy Research. 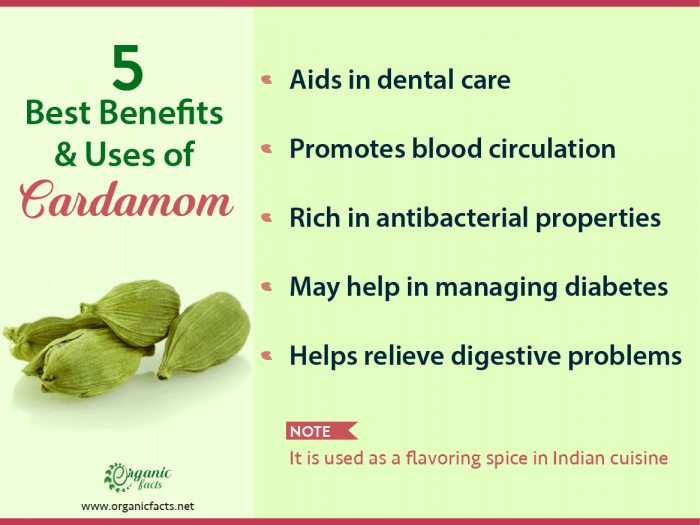 The cultivation of cardamom originated in India, Nepal, and Bhutan.

Studies show that antioxidants derived from plants help in keeping away diabetes and cardamom has been used for the same in many countries.

To analyze the effectiveness of this remedy, researchers conducted various studies and found that cardamom does help in lowering your risk of diabetes mellitus. Although, the mechanism is different.

Laboratory studies have found cardamom to help in regulating glucose and insulin levels through inhibition of digestive enzymes. The loss of the activity of these enzymes produces a reduction of starch and protein digestion.

According to a 2017 research, cardamom could improve inflammation and oxidative stress in hyperlipidemic obese pre‐diabetic women.

More research is still required for this.

Research has verified the presence of antimicrobial properties in cardamom, which help fight common bacteria linked to cavities.

It is also an ingredient in a traditional mouth rinse used to prevent dental plaque. Moreover, cardamom has antimicrobial properties that help you get rid of dental caries.

Cardamom pods and seeds are chewed as a breath freshener, and its essential oil is a popular ingredient in chewing gum.

Cardamom may have beneficial effects on the liver.

Research suggests that cardamom extracts show hepatoprotective properties in people with elevated cholesterol levels, triglycerides, and liver inflammation. These extracts may also have the potential to lower the risk of liver diseases.

Studies also suggest that it can help in lowering the effects of toxicity or damage caused by antibiotics like gentamicin.

Its essential oil is one of the major oils used in aromatherapy and has been suggested in human research to be an effective choice for handling stressful conditions.

Also, a 2016 research published by a team of scientists has found cardamom extract to lower PTSD-like anxiety symptoms in test animals.

One study published in the Saudi Journal of Biological Sciences found that when cardamom was consumed by mice during pregnancy, their offspring showed enhanced learning, memory, and behavior. However, more research is required to ascertain the benefits of this spice on other kinds of behavior.

According to a study published in the Bangladesh Journal of Pharmacology, it was shown to be effective in opening closed windpipes in laboratory animals, as well as protection against inhalation injury in the lungs of mice.

Evidence also shows that inhaling cardamom essential oil has been found to increase blood circulation and oxygen uptake during exercise.

The spice extract was found to have components that may protect the blood from clogging vessels and leading to problems such as heart attack and stroke.

Traditionally, cardamom has been used as a remedy for nausea and may be able to calm the urge to vomit. Consuming cardamom powder was observed to lessen the severity of nausea and vomiting in pregnancy, according to a study published in the International Journal of Preventive Medicine. Alternatively, aromatherapy with cardamom oil can also help relieve nausea.

Other Uses and Benefits

What is Cardamom Used for?

Cardamom is available in many forms like pods, essential oil, powder, or supplements.

It is used as a flavoring spice in Indian cuisine. Its use is just not limited to hot and spicy dishes; the seeds are also added to desserts, baked goods, meatloaves, and beverages to complement the flavor. It is often added to coffee in the Middle East.

Here are a few recipes that you can try at home.

While cardamom originated in India, today it is available in most tropical places in Asia, including India, Sri Lanka, China, Bhutan, Vietnam, Malaysia, Korea, and Japan, as well as in Guatemala (Central America) and Tanzania (Africa). If you are unable to find it near your house, here are 9 Best Cardamom Substitutes for Cooking.

As cardamom is a spice, using it sparingly in your dishes is the best way to reap its benefits. It is generally considered safe for most people. However, there are few side effects found by researchers. Cardamom supplements can lead to:

There is no recommended dose of cardamom so if you have any pre-existing condition, make sure to consult with your doctor before adding it to your regular diet. Also, we suggest women who are pregnant or breastfeeding to take cardamom only after a consultation with a doctor.

So go ahead and make sure you keep this aromatic and beneficial spice on hand!