There are many impressive benefits of marijuana tea, including its ability to reduce nausea, stimulate the appetite, relieve stress and anxiety, protect heart health, eliminate pain, prevent cognitive decline, and boost the immune system, among others.

What is Marijuana Tea?

Marijuana tea comes from the cannabis plant, and the benefits are mainly derived from THC (Tetrahydrocannabinol), the active ingredient found in cannabis. This compound binds to the pain receptors in our brain, essentially functioning as a natural pain reliever, among other therapeutic purposes. Use of this tea is recommended if you live in a country or region where the possession, use, and distribution of marijuana is legal.

While marijuana remains an illegal substance in certain European countries and American states, it has been used in traditional medicine in various parts of the world for thousands of years.

The health effects of marijuana tea can be enjoyed by people suffering from arthritis, anxiety, depression, sleeplessness, anorexia, obesity, hypertension, autoimmune diseases, nausea, and constipation, among many others.

One of the most proven and researched benefits of marijuana tea is its effect on pain. THC, the active ingredient in marijuana, is able to bind to the pain receptors in our brain like any other pain reliever, to provide comfort and relief. However, marijuana doesn’t have many of the dangerous side effects of pharmaceuticals. In terms of pain relief, marijuana tea is used by countless people to treat tremendous pain from chronic diseases. 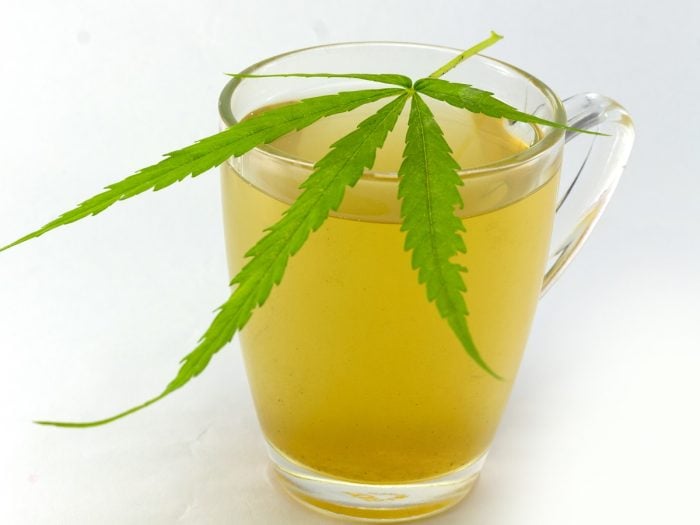 This tea brings you a soothing sensation. Photo Credit: Shutterstock

The psychotropic activity of THC in the body does have mood-boosting and neurotransmitter-releasing effects, meaning that marijuana tea can reduce levels of stress hormones and relieve anxiety. This has been known to help people struggling with depression and other chemical imbalances, as well as those who are simply overwhelmed or unable to deal with stress.

Marijuana tea is known to be soothing and relaxing and is able to reduce blood pressure and stress in the body. This is accomplished by easing the tension of blood vessels and arteries, calming down the body and lowering your risk of heart attack and stroke.

The cannabinoids found in marijuana tea are known to stimulate cognitive activity, and THC has been directly linked to improved memory and focus in a number of studies. These results are exciting to consider, given the ongoing mystery of Alzheimer’s disease, and the potential of a non-invasive, all-natural cure in the form of this tea.

Marijuana tea can act as a sedative, depending on which type of marijuana you used to make the tea. This sleep-inducing action is excellent for those suffering from insomnia or continually disrupted sleep. The sleep is restful and uninterrupted, and you will wake up feeling refreshed!

Marijuana tea is very good for soothing the stomach, relieving inflammation in the gut, and preventing nausea and vomiting. If you have IBS (irritable bowel syndrome) or any other form of chronic stomach issue, this tea can help you in a major way!

The compound cannabidiol has been found to have unique treatment potential of reducing alcohol and drug relapses. It is found to curb cocaine cravings.

As mentioned, the side effects of marijuana tea are similar to smoking marijuana in its more traditional form and may include:

However, these side effects are extremely rare and typically occur when someone consumes too much and is unaware of how marijuana and THC affect the body.

The controversy surrounding marijuana and its many derivatives, including marijuana tea, has resulted in countless negative and unverified claims about the possible side effects. Fortunately, as marijuana legalization becomes a serious conversation in many countries, more research is being conducted on the safety and efficacy of marijuana. So far, the research results are very good, and remedies like marijuana tea continue to grow in popularity.

While you are using any cannabis or hemp derived products, it is important to check your state’s laws and guidelines for the same. Hemp-derived CBD products are illegal in the US on a federal level, but still legal in many states. If you are travelling, then make sure you comply with that city/state’s laws regarding the consumption and use of CBD. Remember that most CBD products are not FDA-approved and therefore may be sold illegally or with wrong labeling. Be wary of the side effects of CBD before consuming – it can cause nausea, dizziness, and dry mouth among others. Also keep in mind that it can have serious drug interactions when taken along blood thinning medicines. Check with your doctor if you have a serious or chronic condition.

Rate this article
Average rating 4.0 out of 5.0 based on 653 user(s).
Read This Next:
Popular Articles