The most important health benefits of milk thistle include its ability to detoxify the liver, speed organ repair, slow the progression of certain kinds of cancer, treat fungal infections, and cure hangovers. It also protects the body against side effects of pharmaceuticals, slows the onset of Alzheimer’s, reduces the risk of heart diseases, and manages the symptoms of diabetes.

What is Milk Thistle?

Milk thistle, scientifically known as Silybmommarianum, is an annual flowering plant with reddish-purple flowers. You may also know milk thistle by any number of other names, depending on where you are in the world, including Marian thistle, Mediterranean, Scotch thistle, and others. [1]

This plant is widely known and highly praised due to the powerful organic components found in its seeds. It is from milk thistle seeds that the extract is derived, which includes high concentrations of silymarin, the most unique and active ingredient in the extract. The extract also contains various fatty acids, including linoleic acid. Although this plant was once native to southern Europe and certain parts of Asia, it has now been naturalized in many places around the world.

There is widespread research concerning the medicinal benefits of milk thistle, many of the results are contradictory or hotly debated. What has been agreed on is the significant impact that the extract can have on liver function and health, for which this plant has been used for centuries. [2]

Let’s take a closer look at some of these important health benefits of milk thistle:

Milk thistle is known for its detoxifying effects on the liver thanks to its flavonoid complex called silymarin. A 2017 study confirms that it can help to speed up the healing process in the liver, undoing much of the damage from excessive drinking or other damaging behaviors on the liver, including cirrhosis. It may also prevent conditions like fatty liver syndrome, jaundice, and hepatitis; however, more research is needed to study the therapeutic potential of the medicinal plant. According to an animal study, the extract can help protect the liver, which can easily be damaged by excessive pharmaceutical use. [3] [4] [5] 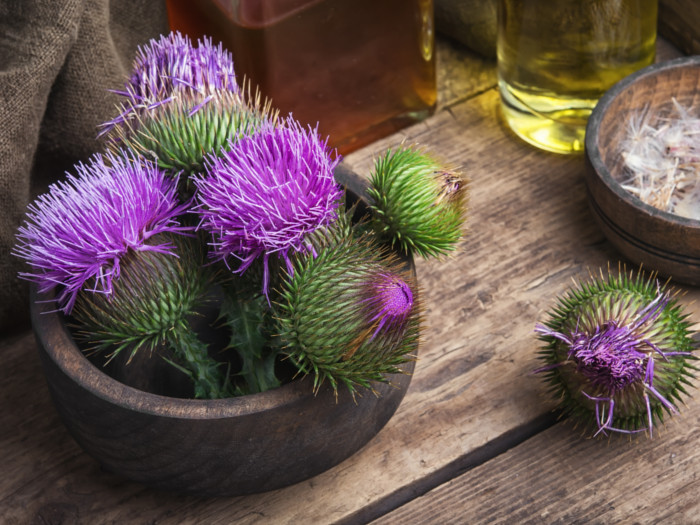 The combination of antioxidants, fatty acids, and silibin in milk thistle extract can actually work to regulate insulin levels and maintain even blood sugar levels for people with diabetes or are at risk of developing it. [6]

Milk thistle extract contains high concentrations of beneficial fatty acids and omega-3s, which are essential for maintaining heart health. Omega-3 fatty acids are able to balance the cholesterol levels in your body, which can prevent atherosclerosis, thereby lowering your risk of experiencing a stroke or a heart attack. [7]

According to Cancer Research UK Website, it appears that milk thistle extract can have an inhibitory effect on the growth of cancer cells and tumors on the skin and can also help prevent cancerous growth in the prostate, breast, and liver. [8]

By purifying the body of metabolic waste, milk thistle helps improve the function of the gallbladder, kidneys, and spleen, thereby preventing the risk of gallstones.

Milk thistle helps to alleviate inflammation due to its rich antioxidant content. It also prevents skin aging and promotes a healthy glow.

Silymarin present in milk thistle is known to promote weight loss as per a research conducted in 2016 on mice.

Milk thistle helps prevent bone loss caused by a deficiency of estrogen. It also improves bone health and prevents the risk of osteoporosis.

By reducing inflammation in the airways, silymarin in milk thistle has shown to prevent the symptoms of allergic asthma.

Milk thistle boosts the overall immunity and fights off infections. Silymarin in it also promotes glutathione formation in the body, which helps fight oxidative stress thereby improving the overall health of the body.

There are certain fungal infections that milk thistle has been shown to neutralize, and that probably relates to milk thistle’s traditional use as a remedy for mushroom poisoning. Many varieties of mushrooms are dangerous, and the “death cap” mushroom is particularly toxic, but it can be administered to prevent mortality. [9]

Slows the Onset of Alzheimer’s

Researchers from the Buck Institute for Aging Research, Novato, USA, believe that the presence of silymarin in milk thistle can stimulate cognitive ability and open up new neural pathways, effectively slowing the onset of dementia and Alzheimer’s disease. [10]

The silymarin present in milk thistle helps in the treatment of psoriasis. It helps in fighting redness, itching, and thick skin patches.

There is no prescribed dosage for milk thistle, so it is best to go as per the suggested dosage on the packaging.

It can be used in numerous ways and in various recipes, including the following :

It is not a commonly allergenic substance, although it has been known to cause the following: [11]

Also, if you are allergic to ragweed, you should avoid using milk thistle, as they are closely related. Finally, women with estrogen deficiencies or endometriosis should avoid this extract, as it can cause estrogen levels to fluctuate.

Caution is also advised for breastfeeding or pregnant women.

Rate this article
Average rating 4.2 out of 5.0 based on 138 user(s).
Read This Next:
Popular Articles