This perennial woody herb is unbelievable when it comes to its impact on human health. Scientifically known as Salvia officinalis, sage is closely related to rosemary; they are often considered “sister herbs.” In fact, many of sage’s health benefits are derived from rosmarinic acid, the organic compound found in rosemary that makes it powerful. Despite many similarities, sage is distinct in that it is actually an evergreen shrub with woody stems and blue-purple flowers found in the Mediterranean region.

The traditional use of sage in medicine is well-documented and goes back thousands of years. It was initially used for the treatment of snakebite, protecting against evil, boosting female fertility, and other uses – many are based in cultural alternative medicine or are no longer en vogue. [1]

However, modern research has discovered that the impact of sage on the human body can be considerable, which is why it is widely exported around the world and makes its way into recipes from the United States to the Middle East. Typically, it is added to savory dishes due to its peppery flavor and is a key ingredient in many meals and meat-based preparations. 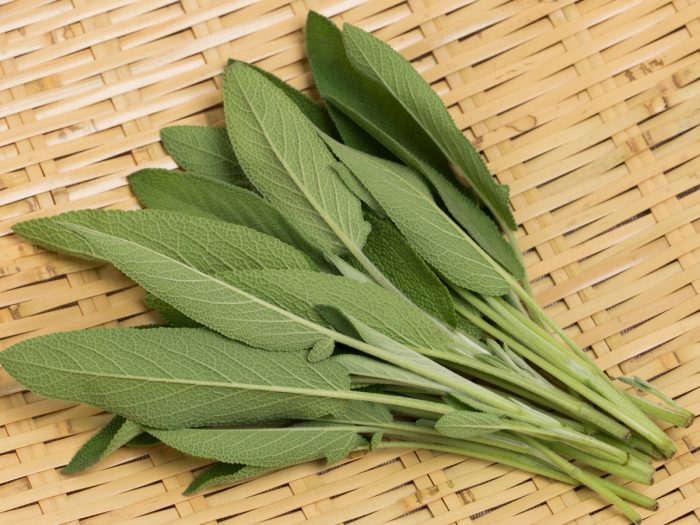 The combination of culinary uses with its undeniable medicinal impact makes sage valuable for your health. With that in mind, let’s take an in-depth look at the health benefits of sage.

The research included in the Journal of Clinical Pharmacy and Therapeutics has shown that even small amounts of sage extracts, whether inhaled or consumed, can help relieve symptoms of mild to moderate Alzheimer’s disease and increase recall abilities and memory retention in people. The brain activity also demonstrates increased concentration and focus on a chosen topic. [3]

A study in the Journal of Ethnopharmacology, claims that sage has the ability to treat many topical diseases that arise out of inflammation. [4] [5]

Chewing on sage leaves is not always the most pleasant remedy, as the flavor can be quite intense, but this is the most effective way to get the organic compounds acting in your system. Creating a tincture or steeping the leaves – a sage brew helps relieve inflammation of respiratory or gastrointestinal tracts, you can eliminate that inflammation with this sage brew. The anti-inflammatory effects on issues such as arthritis and gout, and general inflammation of the cardiovascular system. More recently, studies have indicated that sage may have beneficial anti-inflammatory effects in the realm of dentistry. [6]

Chronic conditions and degenerative diseases can be some of the most debilitating and dangerous health concerns that you face in your life. Many of these are caused by free radicals, the dangerous by-products of cellular metabolism that attack healthy cells, causing apoptosis or mutation.

According to a study in the Agricultural and Food Chemistry journal, the antioxidant compounds found in sage – such as rosmarinic acid, luteolin, and apigenin, can work to neutralize free radicals and prevent them from creating oxidative stress in the heart, organ systems, skin, joints, muscles, and even the brain. [7]

While the herb is usually consumed in small quantities, you can create a topical application of sage (salve or tincture) and use it to reduce or prevent bacterial and viral infections that attack the body through the skin. We often think of illness entering through our nose or mouth, but the skin can also be compromised and be used as a gateway for foreign agents. A topical cream or antibacterial routine that includes sage could be an extra line of defense against that sort of illness vector.

One of the most overlooked benefits of sage is its superior level of vitamin K, an essential vitamin for the body that isn’t commonly found in foods. Vitamin K is a crucial element in developing bone density and ensuring the integrity of our bones as we age. Adding sage leaves to your diet can increase your vitamin K levels significantly, as a single serving has 27 percent of your daily recommended intake. [9]

May Aid in Menopausal Care

The findings of the study published in the International Journal of Medical Research & Health Sciences showed that extracts of sage significantly reduce the frequency, severity, and duration of hot flashes and night sweats. Hence, it improved the menopausal symptoms in menopausal women. Conclusively, this safe and effective herb is a remedial cure for the treatment of menopausal symptoms. [10] 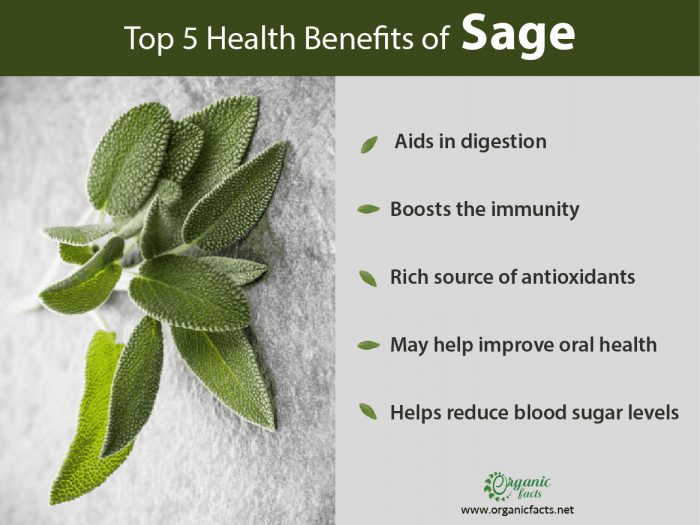 Sage is closely related to rosemary; they are often considered “sister herbs.”

A topical salve or a tincture of the plant can be created using sage leaves, which has been shown to be effective against certain skin conditions, including eczema, psoriasis, and acne. These unsightly blemishes can be quickly soothed and their appearance can be reduced gradually if you regularly apply sage extracts and salves to the inflamed or affected areas.

According to a research study published in the British Journal of Nutrition in 2006, sage is an effective herb that assists in diabetes management. It may contain certain extracts and chemicals that mimic the drugs typically prescribed for managing diabetes, such as metformin. It appears to regulate and inhibit the release of stored glucose in the liver, preventing major fluctuations of blood sugar, which can help to prevent the onset of type 2 diabetes or at least manage the condition if it has already manifested. [11]

Rosmarinic acid, found in sage, is thought to act as an anti-inflammatory agent for the stomach, preventing gastric spasms and reducing the occurrence of diarrhea and gastritis. Adding it to your meals may get your entire digestive process back on track and reduce inflammation throughout the gut.

Sage (Salvia) species have been used in ancient medicine for the relief of pain, protecting the body against oxidative stress, free radical damage, inflammation, bacterial and viral infection, etc. Studies also suggest that sage species are considered as means of drug development because of their reported pharmacology and therapeutic activities. This is prevalent in countries like Asia and the Middle East, especially China and India. Studies suggest that Salvia species, additionally, might provide novel treatments for the relief or cure of various life-threatening illnesses such as depression, obesity, diabetes, lupus, heart diseases, and cancer. [13]

Word of Caution: Although there is not a measurable amount of oxalates or purines, nor is sage considered a typically allergenic herb, it is still in the mint family, so those who suffer from allergic reactions to members of that broad plant family should consult a doctor before adding it to their dietary regimen.

Rate this article
Average rating 3.9 out of 5.0 based on 975 user(s).
Read This Next:
Popular Articles