What is St. John’s Wort?

St. John’s wort has become extremely popular in recent decades as a potential cure-all herbal remedy for many health issues. Unlike other herbal treatments, many of its health benefits have been verified by the scientific community and its herbal supplements are commonly prescribed by medical professionals. St. John’s wort is a small flowering plant from the Hypericum genus that has the scientific name of Hypericum perforatum, and it grows wild in Europe, but has since spread to the Americas, Russia, Asia, China, and the Middle East. You might know St. John’s wort by a different name, such as rosin rose or goatweed, but they all have the same impact. The vast range of its health benefits make it an important factor in herbal supplementation, and it is now widely available throughout the world. [1]

St. John’s wort can be found in capsule, tincture, oil or raw form. The chemical constituents of St. John’s wort include bioflavonoids and a range of antioxidants that can have a significant impact on the hormonal, physical, and chemical behavior of the body. While the components can be very valuable to human health, there are also a number of side effects or complications that can arise with the use of St. John’s wort in combination with certain conditions or medications. Consult your doctor before using St. John’s wort. [2]

Health benefits of this amazing herb include its anti-depressant qualities, skin care, and many more.

Perhaps the most well-known effect of St. John’s wort is its anti-depressant nature. It has been widely used to relieve symptoms of depression for generations and is now a popular natural solution that doctors and psychiatrists often prescribe to their patients. It contains a rare combination of antidepressant chemicals that inhibit or delay the reuptake of certain neurotransmitters like serotonin, dopamine, and norepinephrine. [3]

The health benefits of St. John’s wort extend beyond depression, as they help people suffering from anxiety and mood swings as well. By helping to regulate the hormonal balance in the body, St. John’s wort is able to get the metabolism and internal clock back in line, providing help for sleeplessness, irritability, and chronic fatigue. Eliminating chronic stress hormones from the body can also improve overall health and cognitive function, as excess stress hormones can affect various organs. [4] 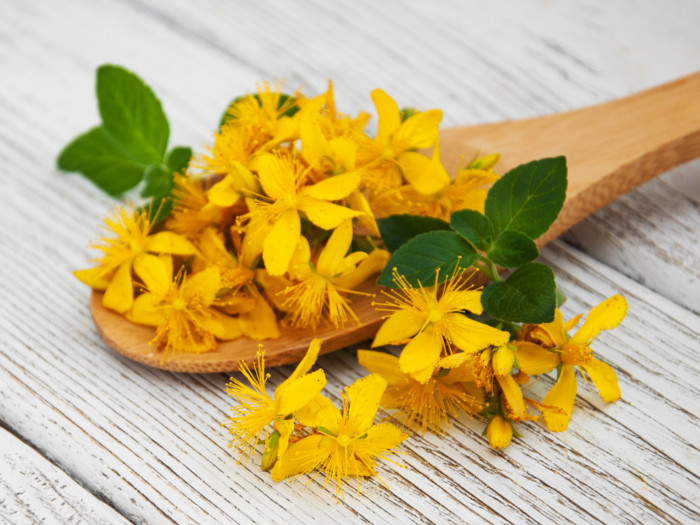 There are two distinct periods of feminine sexual health that can be challenging in terms of mood swings: pre-menstrual syndrome and menopause. St. John’s wort is widely recommended for women in both these periods, as its chemical constituents have been shown to reduce mood swings and anxiety in menopausal women. Moreover, they reduce the severity of cramping and pre-menstrual irritation and depression. [5]

Early indications show that the use of St. John’s wort can be very helpful in easing cravings and withdrawal symptoms after quitting cigarettes, alcohol or other addictive substances. This could prove very useful, as recovery from addiction is challenging. However, additional research on this particular benefit is still ongoing. [6]

New research has recently come to light saying that St. John’s wort has certain antiviral capabilities, which reduce the risk of AIDS, hepatitis, and other serious viral conditions. The only problem with this is that very high doses of it are required for this sort of antiviral effect, which would also cause a range of unpleasant side effects. [7]

As we already know about the antidepressant effects of St. John’s wort, the active ingredients also have strong effects on hormone regulation in the body. Hypothyroidism is one of the most common thyroid disorders and this herb has been shown to reduce its symptoms and help the thyroid gland release normal levels of hormones again. [8]

The soothing nature of St. John’s wort and the rich concentration of antioxidant and anti-inflammatory compounds make it perfect for easing the pain of arthritis, gout, joint discomfort, and muscle ache. Just as it helps to ease inflammation on the skin and in the gut, St. John’s wort also lowers inflammation in the cardiovascular system, thereby helping lower blood pressure and decrease stress on the heart. [9]

If you use St. John’s wort for topical application in the form of a salve or tincture, it can speed the healing process of burns, bruises, and scrapes by stimulating circulation of oxygenated blood to damaged skin cells. [10]

During pregnancy, hemorrhoids and other stretched out areas of the body can become very painful. Although it is not recommended to take oral supplements throughout the pregnancy, topical application of St. John’s wort salves and paste are highly recommended for women suffering from these pregnancy-related conditions. [11]

Cancer research has recently begun putting more faith in the role that St. John’s wort could play. Laboratory research conducted by Susan J. Murch and Praveen K. Saxena, Department of Plant Agriculture, University of Guelph, Guelph, Ontario, Canada has also shown a definite correlation between the prevention and treatment of leukemia with consistent use of St. John’s Wort supplements.  According to the study, melatonin‐rich germplasm line of St John’s wort may ease fundamental studies on melatonin biosynthesis, metabolism and new developments in natural products for treatment of cancer. [12]

Word of Caution: The most common negative effects of St. John’s wort are dizziness, nausea, fatigue, and confusion. These effects generally occur in people with diagnosed bipolar disorder and schizophrenia. St. John’s wort can also be a dangerous mix with a variety of medications. It is essential to discuss your current conditions with a physician before adding this herb to your supplement regimen.

Rate this article
Average rating 4.0 out of 5.0 based on 546 user(s).
Read This Next:
Popular Articles