Turmeric as a spice has been used in Asian countries such as India for various culinary preparations. However, due to the ongoing research on curcumin, rich turmeric has found its place in households all over the world. Drinking turmeric tea is the easiest way to add this healthy spice to your daily routine.

What is Turmeric Ginger Tea?

Turmeric ginger tea is made by steeping ginger root and fresh turmeric root in hot water. Ginger (Zingiber officinale) and turmeric (Curcuma longa) are widely used individually for their nutritional and medicinal effects. These two powerful herbs are also widely available and have been heavily researched due to their global popularity.

Turmeric ginger tea is a delicious and healthy low calorie and caffeine-free drink. The beverage derives its medicinal benefits from:

Let’s look at the benefits of turmeric ginger tea in detail.

Inflammation is the cause of all kinds of diseases. Both ginger and turmeric have anti-inflammatory properties, which can help reduce oxidative stress in the body and help prevent different kinds of diseases. A study involving 120 people with osteoarthritis published in the Journal of Traditional and Complementary Medicine showed that consuming 1 gram of ginger extract per day for 3 consecutive months effectively lowered inflammation and levels of nitric oxide, which plays an instrumental role in causing inflammation and chronic diseases. Meanwhile, a study published in the Journal of Alternative and Complementary Medicine has shown that turmeric extract helps to reduce inflammation, perhaps in the same way as certain anti-inflammatory medicines.

It is because of chronic inflammation that people develop chronic health ailments. A 2019 study published in the Evidence-based Complementary and Alternative Medicine Journal has found Zingiberaceae extracts (present in both ginger and turmeric), has the power to lower cholesterol levels, primarily LDL cholesterol. LDL is largely responsible for plaque deposition in the arteries and blood vessels, which can increase atherosclerosis and one’s risk of heart attacks and strokes. 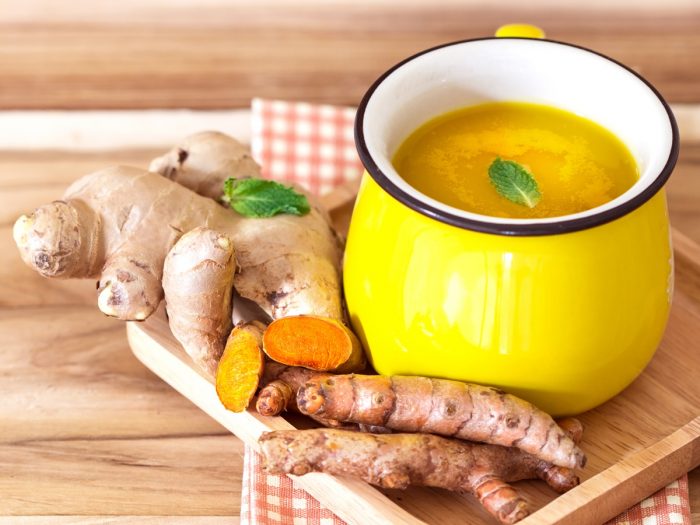 While the brain-boosting nature of ginger is well known, the unique combination of antioxidants present in curcumin can help stimulate neural activity, increase focus, and reduce the deposition of beta-amyloid plaque, which may lead to Alzheimer’s disease and dementia. This is confirmed in a study by a team of American researchers.

Ginger also offers anti-inflammatory effects on brain tissue, which can reduce oxidative stress. A study published in the Evidence-based Complementary and Alternative Medicine showed how when diabetic rats were administered with ginger extracts, it exhibited neuroprotective effects against any oxidative damage including potential brain damage.

Zingiberaceae extracts in curcumin and gingerol, the two most notable active components in this tea, have analgesic properties, meaning that they can relieve pain throughout the body, says a 2015 report published in the Nutrition Journal by a team of researchers from the UK and US. This is in addition to its anti-inflammatory properties, which can help to relieve joint pain and other discomforts in the muscles and tissues of the body. There is also evidence that turmeric is effective at relieving joint pain associated with arthritis.

Turmeric ginger tea boasts a number of antimicrobial, antibacterial, anti-fungal, and antiseptic qualities that make it an excellent immune system aid, according to a study conducted by a team of Indian researchers. If you suffer from weak immunity and seem to come down with a cold all the time, this herbal tea may be your solution. Furthermore, for a cough, cold, and congestion, a combination of these powerful ingredients helps speed up healing and eliminate the underlying infections.

The turmeric in this herbal tea has often been used to treat skin conditions, particularly acne and inflammatory problems like psoriasis and eczema. The gingerol within turmeric ginger tea is also an excellent antibacterial and antioxidant compound that protects the skin from infection, while also stimulating the growth of new cells and preventing signs of aging, such as wrinkles and blemishes. 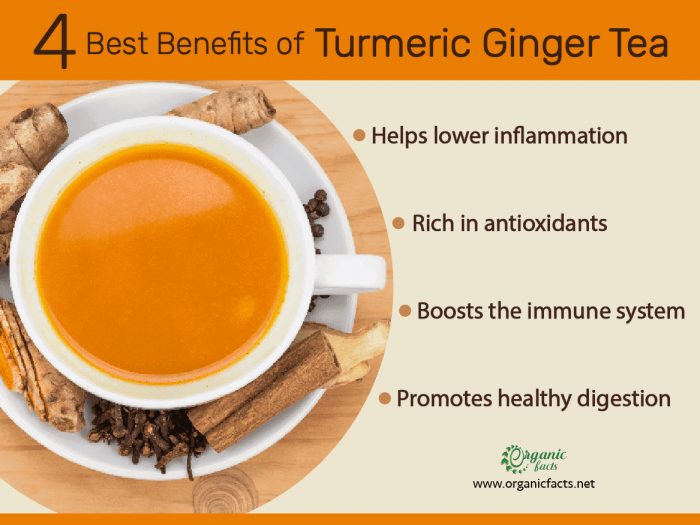 Turmeric ginger tea is made by steeping ginger root and fresh turmeric root in hot water.

Research cited in the British Journal of Nutrition shows the blood sugar-regulating abilities of both ginger and turmeric are well known, so in combination, they are even more effective for managing symptoms of diabetes. By keeping glucose and insulin levels balanced, turmeric ginger tea prevents the dangerous spikes and drops in blood sugar that can be disastrous for those with diabetes or those at high risk of developing the disease.

How to make Turmeric Ginger Tea?

Turmeric ginger tea can be brewed at home easily and all you need is fresh ginger, turmeric, lemon, honey, and black pepper.  So here’s how you can make Turmeric Ginger Tea at home. 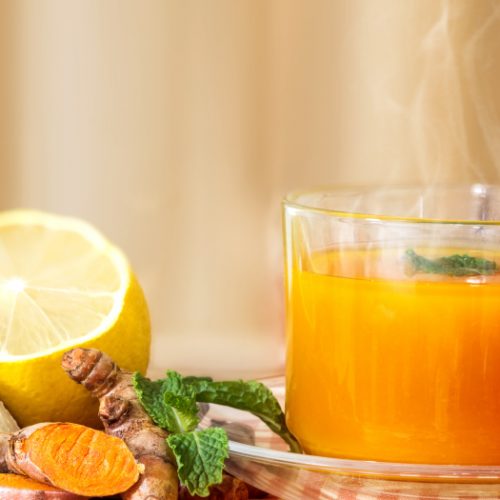 Piperine, the active ingredient in pepper, helps to increase the bioavailability of turmeric, so if you want the full effect of curcumin, it is always wise to consume it along with black pepper. Honey and lemon are both included in the recipe to add sweetness and palatability to the drink.

How often can you drink Turmeric Ginger Tea?

There is no standard dosage or the exact measurement of how much turmeric ginger tea can you drink a day. Turmeric ginger tea is extremely powerful, so when taken in moderation you will be able to enjoy the health benefits outlined above. It is best to consume 1-2 cups every day.

To make turmeric ginger tea, you can use ginger root extract which is available in supplement form as well. It is effective when taken in doses between 1,500–2,000 mg daily. Turmeric supplements are available as well and they provide a more concentrated dose of curcumin. It can be taken in doses of 1000 mg daily. Consuming more than this can increase the risk of certain side effects. It is advisable to consult a doctor before consuming it.

Side Effects of Turmeric Ginger Tea

The side effects of turmeric ginger tea largely result from excess consumption and include gastrointestinal problems. Also, they can occur as a result of drug interactions, complications with pregnancy, individual allergies, and excessive consumption of the tea, which is not recommended.