While most of the uses of jojoba oil include skincare and hair care, there are some other benefits to the body. This oil is specifically for topical use, where it can deliver a vast array of health benefits to improve your overall wellness and appearance.

What is Jojoba Oil?

Jojoba oil is the liquid extracted from the seeds of the jojoba plant, which is a shrub native to the southwest region of North America. Bearing the scientific name Simmondsia Chinensis, the seeds of this plant are composed of nearly 50% oil. It is called an oil, but jojoba oil plants wax, which has been in use for thousands of years in medical practices.

This oil is a rich source of oleic acid, eicosenoic acid, and erucic acid, as well as lower levels of stearic, palmitic, nervonic, and palmitoleic acids, all of which have their antioxidant, antiseptic, and anti-inflammatory effects on the body. And it does not contain any medium-chain fatty acids

Its composition is similar in consistency to sebum. Sebum is our body’s natural oils that seal moisture and protects our skin and hair from damage. Many people use jojoba oil as a carrier oil for more potent essential oils. However, due to its close resemblance to sebum, jojoba oil is an effective skin and hair healer on its own and it is easily absorbed by skin and hair. [1]

Jojoba oil has a longer shelf life than many other natural oils, due to the very low level of triglycerides, making it less susceptible to damage from high temperatures.

Jojoba oil is most commonly turned to by people suffering from the following health issues:

Some of the compounds found in jojoba oil are almost instantly absorbed into the skin, where they form a protective shield around the skin cells, preventing them from losing any additional moisture. This also helps in preventing cracked heels. The hydrating properties of this oil can prevent skin flaking and protect the cells that are most vulnerable to outside elements. [2] 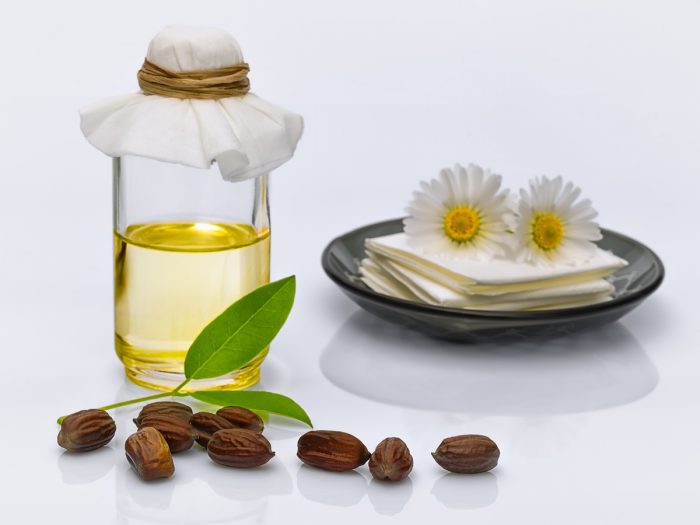 The skin is the body’s largest organ and is constantly exposed to the harsh environment, irritants, pollutants and, pathogens, which means that it often gets inflamed, both from outside and inside. Jojoba oil can be applied to the irritated, swollen, itchy, or inflamed skin, and can quickly soothe those cells, thanks to the emollient qualities of this oil’s active ingredients. It can also be used as a body oil. [3]

Jojoba oil can also be applied to chapped lips to bring back their moisture and give them a soft and lush look. This can be attributed to its protectant nature. You can also prepare a jojoba lip balm by mixing jojoba oil with beeswax.

If you suffer from a chronic condition, such as psoriasis, eczema, or rosacea, regular use of jojoba oil can attack the underlying fungal, viral, or bacterial infection and neutralize it quickly. [4]

For wounds, scrapes, cuts, and scratches, applying this oil (typically diluted) can help speed up the healing process, while also protecting against infection. The antioxidants found in this oil, including vitamin E, can stimulate blood flow to these areas and speed production of healthy new cells. [5]

Being hypoallergenic, this oil can be used to remove makeup, dirt, and bacteria from the skin naturally. So, instead of using cosmetic make-up removers that are high in chemicals, switch to jojoba oil. You can also use this oil to remove eye makeup.

When applying jojoba oil to sunburned areas of your skin, you are placing a protective shield over the affected area, where vitamin E and B complexes can speed up the healing process without further damage or water loss as a result of solar radiation. [6]

Jojoba oil can also be used in place of shaving creams and aftershave lotions, as it has healing and natural moisturizing properties. It also reduces the risk of cutting and scraping while shaving and gives a smooth surface to the skin.

For people worried about premature aging, including the wrinkles, age spots, and blemishes that accompany them, the antioxidant compounds in jojoba oil can increase skin elasticity, minimize the appearance of wrinkles, and provide a youthful glow to your skin. [7]

Jojoba oil can help prevent hair loss caused by blocked hair follicles, by eliminating the oils clogging those follicles, and ensuring normal hair growth. It can also help to regulate sebum levels in the follicles. [8]

The moisturizing, antibacterial, and anti-inflammatory properties of jojoba oil mean that it can prevent the dry, flaking, and irritated skin that leads to dandruff. Not only is this condition unsightly, but also difficult to eliminate. Adding a few teaspoons of jojoba oil to your shampoo and massaging it thoroughly into your scalp can keep dandruff at bay. [9]

It can be hard to keep your hair under control, but the proteins found in jojoba oil can keep your hair in check, moisturizing the strands and giving them a smooth shine. Adding a few drops of jojoba oil to wet hair and massaging it through the strands can be a leave-in conditioner that gives you lasting protection against frizzy hair. [10]

Skin and hair are the focus of jojoba oil, but it can also improve nail health, fungal infections, a weak immune system, and those with a high risk of oxidative stress.

Rich in Vitamin B

Jojoba oil can also improve the immune system when used in aromatherapy preparations due to its rich vitamin B content. While the use of this oil isn’t very common in that form, it can still give your internal systems an extra level of protection against bacterial, viral, and fungal infections.

Applying this oil, often in conjunction with other essential oils, to the nail beds on your fingers and toes, can help to eliminate fungal infections and keep those vulnerable areas free from outside pathogens and foreign substances. It can also prevent athlete’s foot and boost the healing process. [11]

The antioxidants present in this oil, including vitamin E, can help prevent oxidative stress and chronic disease in multiple areas of the body, not just on the skin and scalp. When inhaled, or even when allowed to absorb into the skin, this oil can prevent healthy cell mutation and generally protect the organ systems from being compromised.

How to Use Jojoba Oil?

There are many different uses of jojoba oil, including the following:

Negative side effects caused by jojoba oil are rarely reported, so there isn’t necessarily an upper limit on how much of this oil to use. However, due to the potent nature of the oil, more than 2 teaspoons are rarely recommended for hair treatments, and for direct topical applications, sometimes 4-5 drops are enough to affect a concentrated area.

There is such a wide range of uses for this oil that a particular dosage limit is not possible. Speak with your natural health practitioner about different recipes, preparations, and blends of jojoba oil for your particular health concerns.

Side Effects of Jojoba Oil

There are some side effects to using jojoba oil, such as the following.

Rate this article
Average rating 3.9 out of 5.0 based on 70 user(s).
Read This Next:
Popular Articles