Benefits & Side Effects of Truffle Oil

Truffle oil has numerous uses and potential health benefits which may include its ability to lower cholesterol, reduce the risk of diabetes, improve circulation, decrease inflammation, boost antioxidant levels, and strengthen the immune system. Depending on the type of truffle oil you get, synthetic or pure, different health benefits may be available to you. In terms of side effects, it can cause dangerous drops in blood sugar and blood pressure, while maybe also generating allergic reactions and skin inflammation in some people.

Most of the truffle oils that you see on the shelves of high-end grocery stores and on the menus of fancy restaurants may not actually contain any truffles. For those who don’t know, truffles are a type of mushroom. Generally, they are highly priced and are known for their rarity and the unique flavor they impart to the food. From the Tuber genus, truffles are known as one of the most expensive foods on the planet, and with pure truffle oil selling for as much as $90 per ounce, manufacturers may have found a way to tap into that luxury market. By adding a chemical compound found in truffles – 2,4 – dithiapentane – to simple virgin olive oil, “truffle oil” can mimic the flavor of truffles at a fraction of the cost. Pure truffle oil, which could provide a slightly different set of health benefits, may be much less common and far more expensive. Most of the time, any health benefits derived from truffle oil may be the same as what you would get with olive oil (grapeseed oil is also occasionally used as a base), but the price would likely be higher. [1]

Despite the inauthenticity of most commonly used truffle oils, they are widely used in food preparation, often as salad dressings, mixed in with pasta sauces, on pizza, blended with eggs, topping chicken or fish, and even as a flavorful addition to popcorn or other snacks. Unlike most other vegetable oils, truffle oil is rarely cooked with. This is probably due to the expensive nature of this oil, and the fact that the flavor can easily be compromised. Instead, it is used as a finishing oil in most cases, drizzled on top of a meal after it has been prepared to deliver a final burst of truffle flavor.

People who are suffering from high blood pressure, high cholesterol, diabetes, inflammatory conditions, poor circulation, and a weak immune system, as well as those who are at risk of chronic diseases, may use truffle oil. However, it is important to note that many truffle oils on the market don’t deliver any of the health benefits of actual truffles but merely the flavor of those valuable mushrooms.

Olive oil, from which the majority of truffle oil is prepared, has possibly high levels of monounsaturated fats and might be able to balance cholesterol levels, probably by reducing LDL-cholesterol, the “bad” form of fatty acids. This can result in a lower risk for cardiovascular conditions such as atherosclerosis, heart attacks, and strokes. Furthermore, the pure form of this oil has been linked to lower blood pressure, which may reduce strain on the blood vessels and arteries. [2]

Truffles possess strong anti-inflammatory qualities, which may make them an excellent remedy for joint pain and arthritis, as well as gastrointestinal distress, respiratory infections, and skin irritation. This is one of the few times that people may use truffle oil as a topical remedy, rather than consuming it directly. Both pure oil and synthetic truffle oil may aid inflammation to a certain degree. [3] 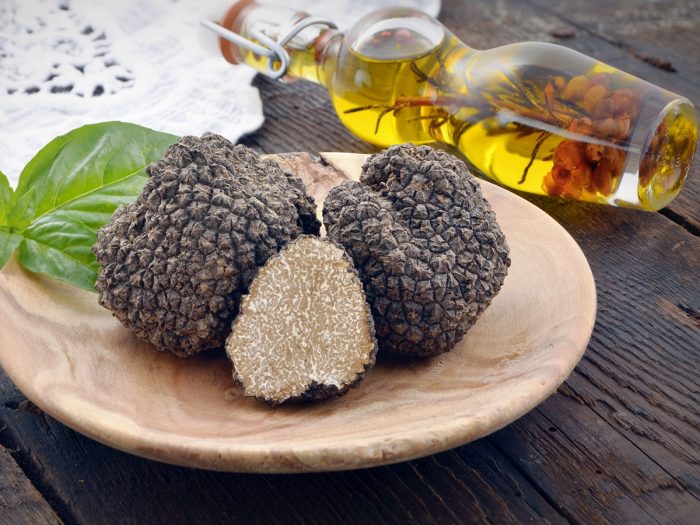 Truffle oil has shown some anticoagulant abilities, which may make it very good for circulation, and perhaps a good protector of heart health. This might reduce the chances of developing clots in the body, while also plausibly ensuring proper oxygenation and delivery of resources to various parts of the body. [4]

Olive oil may have a proven ability to lower blood sugar levels, which might be good news for people with diabetes or those at high risk of the disease. Considering that truffle oil is typically made of olive oil or grapeseed oil with truffle flavoring, this culinary oil might also have a minimal impact on controlling blood sugar levels. According to a recent study by the Nutrition and Diabetes journal, the consumption of olive oil proves advantageous for the prevention and management of type 2 diabetes. [5]

Truffles are known to be rich in antioxidants and have been linked to the prevention of tumor formation. Therefore, pure truffle oil may possess similar properties but research is limited. Olive oil also has certain antioxidant properties, perhaps making even the truffle oil most commonly found in stores good for preventing chronic disease and lowering the risk of cancer. [6] [7]

If you are cooking with true truffle oil, then you may also benefit from the potent antibacterial quality of those mushrooms. This can help strengthen the immune system from the inside out, including your gut, respiratory system, and mouth. Inexpensive versions of this oil, made from primarily olive oil, may not have as strong of an antibacterial effect. [8]

Side Effects of Truffle Oil

There are a few potential side effects of truffle oil, including skin inflammation and complications with various medications and medical conditions.

Rate this article
Average rating 3.9 out of 5.0 based on 52 user(s).
Read This Next:
Popular Articles