Proven Bamboo Shoots Health Benefits & How To Use

Bamboo shoots, also known as bamboo sprouts, are edible shoots of the bamboo species. They are crisp and similar to asparagus. These shoots are famous as a seasonal delicacy in vast regions of Taiwan, China, and South-East Asian countries.

The health benefits of the bamboo shoots may include aiding weight loss, balancing cholesterol levels, and boosting the immune system. They also have potentially anti-inflammatory properties.

What are Bamboo Shoots?

Bamboo shoots are the sprouts that spring out beside the bamboo plant. These sprouts (or shoots) are edible and they belong to the Bambusoideae  [1]subfamily of grass, according to research from Northern Illinois University. They are accessible in fresh and fermented forms and are highly nutritious.

In Japan, they are considered to be the “King of Forest Vegetables”. There are many bamboo species that sprout shoots, but only a handful of them are actually cultivated and consumed. 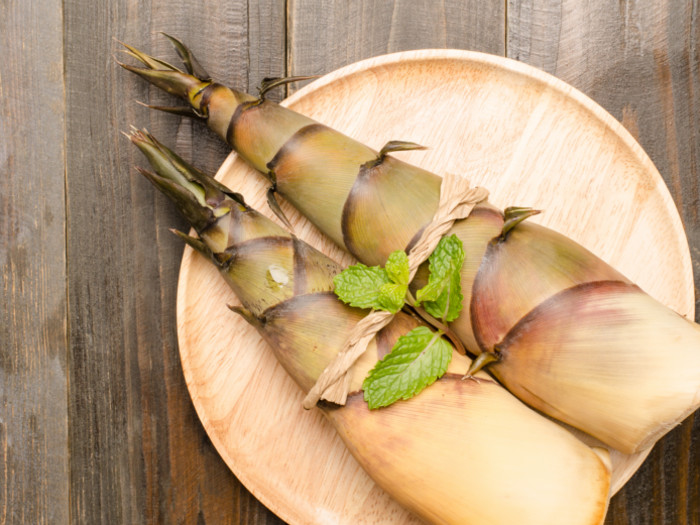 Bamboo shoots contain phytochemicals that have antibacterial and antiviral effects in the body. Photo Credit: Shutterstock

According to a study in Comprehensive Reviews in Food Science and Food Safety, bamboo shoots are rich in dietary fiber, low in calories, and power-packed with essential nutrients. These nutrients include protein, carbohydrates, amino acids, minerals, fats, sugars, fibers, and inorganic salts. [4]

According to data procured by USDA, A 100 gram serving of raw bamboo shoots contains:

Vitamins: such as vitamin A, E, B-vitamins, thiamin, riboflavin, niacin, and folate

Minerals: such as calcium, magnesium, potassium, phosphorus, and iron

Bamboo shoots are an exotic food consumed in many Asian countries and are also gaining demand in other countries. They are known for their various health benefits, including those explained in greater detail below. [5]

The prevalence of obesity and being overweight has substantially risen in the past three decades around the globe. This huge burden of treating obesity with effective methods is the need for the hour and requires multiple clinical trials. According to a study in the Scientific Reports, bamboo shoots can be most effective in reducing high-fat diet obesity. Moreover, the study indicates that bamboo shoot fiber may have the potential in preventing obesity and metabolic syndrome. [6]

According to some research, phytosterols and phytonutrients found in bamboo shoots can be ideal for dissolving harmful LDL cholesterol in the body. This can ease cholesterol out of the arteries for a smooth supply and movement of blood throughout the body. [7]

The vitamins and minerals in bamboo shoots can be ideal for improving the body’s immune system. Also, the antioxidants present in them can be essential for strengthening the body from the inside out, even when it comes to potentially delaying the neurodegenerative disease. [8]

How to Cook & Store Bamboo Shoots?

Word of caution: Bamboo shoots can be harmful to your body if eaten raw as it produces cyanide in the gut. It is best advised to consult your doctor before including them in your diet. [16]

Rate this article
Average rating 4.0 out of 5.0 based on 451 user(s).
Read This Next:
Popular Articles