Molokhia is only one name of dozens of this leafy plant of the Corchorus species, which is commonly utilized in Egyptian and Middle Eastern cuisine. It is also known as mulukhiyah, molohiya, mloukhiya, and a number of other translations, depending on where in the world you happen to be using this beneficial vegetable! The historical usage and the bitter taste may be the reason that molokhia isn’t too common around the world, but the taste and consistency are not much different than okra or various other cruciferous vegetable leaves. When boiled, molokhia makes a kind of broth, making it a common ingredient in soups. [1] [2]

Molokhia originated in Egypt, but has since spread throughout the Mediterranean and Middle Eastern region, and is just beginning to appear in other parts of the world, particularly in exotic import stores. Interestingly enough, depending on the national cuisine you are sampling, you may find molokhia used in a variety of different ways, including as salads, soups, curries, garnishes, spices, or flavoring agents. However, its versatility isn’t the only reason for its popularity. There are more than 30 vitamins, minerals, and trace minerals in molokhia, as well as certain organic compounds that significantly contribute to human health. Let’s take a closer look. [3] 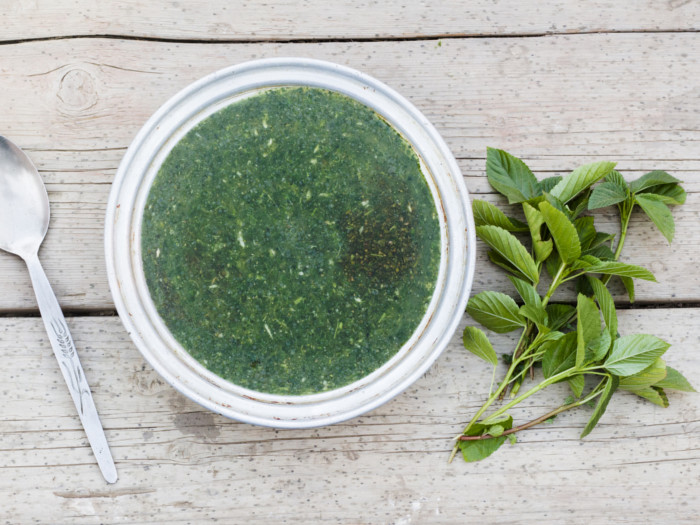 Molokhia gets its name from a dark leafy green of the same name. Photo Credit: Shutterstock

The most prominent nutritional components of molokhia include fiber, potassium, iron, calcium, magnesium, phosphorous, and selenium, as well as vitamin C, E, K, A, vitamin B6, and niacin. It also contains certain antioxidant carotenes and antioxidant elements, making a well-rounded and highly beneficial addition to your diet! [4]

The health benefits of Molokhia include a regulated blood pressure, better blood circulation, improved digestion, and others. Let’s have a look at the benefits in detail.

Protecting heart health is a critical concern in modern life, and molokhia can significantly aid in that goal by lowering blood pressure levels. The high potassium content in molokhia means that the blood vessels and arteries will be relaxed because potassium is a vasodilator. This increases blood flow and oxygenation levels to the body and reduces the strain on the cardiovascular system. [5]

In addition to lowered blood pressure, molokhia also contains significant levels of iron, which are key components in the production of red blood cells. High iron levels mean a reduced chance of developing anemia, while also ensuring that circulation in the body is at optimal levels, which can boost energy levels.

Dietary fiber is one of the major elements of a person’s diet that can easily be overlooked, but dietary fiber is key for regulating your digestive processes. Like most leafy vegetables, molokhia is high in dietary fiber. This means that this Egyptian leaf can optimize your digestive process by eliminating constipation, bulking up the stool to speed up digestion, increase nutrient uptake efficiency, and reduce symptoms like bloating, cramping, and excess gas. [6]

Although blood pressure reduction is already on the positive side for molokhia’s side effects, the high fiber content also helps to balance cholesterol levels in the bloodstream, as dietary fiber binds with “bad” cholesterol and removes it from the body. This reduces your chances of developing atherosclerosis, which can lead to heart attacks and strokes. [7]

One of the other highly praised elements of molokhia is the magnesium found within it! The good content of magnesium in molokhia means that you can eliminate sleep disorders, such as insomnia or sleep apnea because magnesium facilitates the release of certain hormones in the body that relax and soothe the nerves. Increasing magnesium intake has been known to result in restful, uninterrupted sleep patterns. [8]

The combination of vitamin A, E, and C makes molokhia a wonderful food to eat if you want to increase the strength of your immune system. Vitamin C stimulates the function of white blood cells, while vitamin A and E are two other antioxidant vitamins that protect everything from the skin and eyes to the organ systems, thereby preventing the development macular degeneration and other chronic diseases caused by the activity of free radicals. [9]

Molokhia is particularly impressive because of its vast range of minerals, both essential and trace. This makes it one of the best vegetables on the market for increasing bone health and protecting against osteoporosis. Of iron, calcium, magnesium, and selenium, not to mention a dozen other peripheral minerals, molokhia can guarantee strong and durable bones for many years to come. [10]

Vitamin E works as an anti-inflammatory agent in the body, and the significant level of vitamin E in molokhia is quite rare, as many people take a vitamin E supplement due to its food-based rarity. Therefore, if you suffer from arthritis, gout, or other inflammatory diseases, molokhia can be an ideal addition to your diet. [11]

When it comes to the formation of new cells, muscles, ligaments, skin, and organ systems, almost all minerals and vitamins are required in some form or another. Magnesium is particularly important for the formation of new organic material, so the very high level of magnesium in molokhia makes it a favorite for parents wanting to ensure proper growth and development of their children, although it also works to protect adults and speed up the healing process. [12]

Word of Warning: There are very few reports of allergic reactions to molokhia, but as always, before adding a new dietary element to your routine, speak to your health professional or nutritionist.

Rate this article
Average rating 4.1 out of 5.0 based on 190 user(s).
Read This Next:
Popular Articles