The health benefits of okra include its ability to improve digestive health, manage diabetes, reduce fatigue, and increase endurance levels. It also helps reduce stress and lowers cholesterol as well as triglyceride levels in the body.

Okra is a flowering plant that is known in many parts of the world as ladyfinger or bhindi, is highly prized because of its seed pods. The scientific name of this interesting plant is Abelmoschus esculentus. While its origin is still unclear, research says that it could have been native of South Asian, West African, or Ethiopian but the jury is still out.

Okra is frequently used in dishes worldwide, from the Caribbean to China. Its popularity is increasing all the time, particularly due to its various uses. The different uses include:

Okra may not be the most conventional vegetable in the garden, but it has a rich content of vitamins and minerals, including B vitamins as well as vitamins A, C, E, and K, as per the USDA National Nutrient Database. The vegetable also contains calcium, iron, magnesium, potassium, and zinc. Furthermore, it contains high levels of nutritious mucilaginous fiber, colloquially called “okra slime”. Most of the health benefits are due to the presence of minerals, vitamins, and organic compounds found in it.

Let us discuss the important health benefits of okra in detail below.

Okra has potent antioxidant power in its seeds and peel, which specifically help people with type 2 diabetes. A recent study published in the Journal of Pharmacy and Bioallied Sciences explored the antidiabetic and antihyperlipidemic properties of the green sticky vegetable. Diabetic rats were administered the powdered form for a range of 14 to 28 days and showed improved lipid profiles when the tests ended.

Furthermore, the health benefits of okra water are known to be beneficial for managing blood glucose levels. A study published in the Natural Product Communications, says that in Turkey, drinking water infused with roasted okra seeds is a common natural remedy for diabetes.

A 2016 study by a team of international researchers says that the fiber content of okra can help improve digestion. The study found that the high amount of fiber in the vegetable helped improve the absorption process in the large intestine and stimulated peristalsis in the body. This may also help prevent constipation. 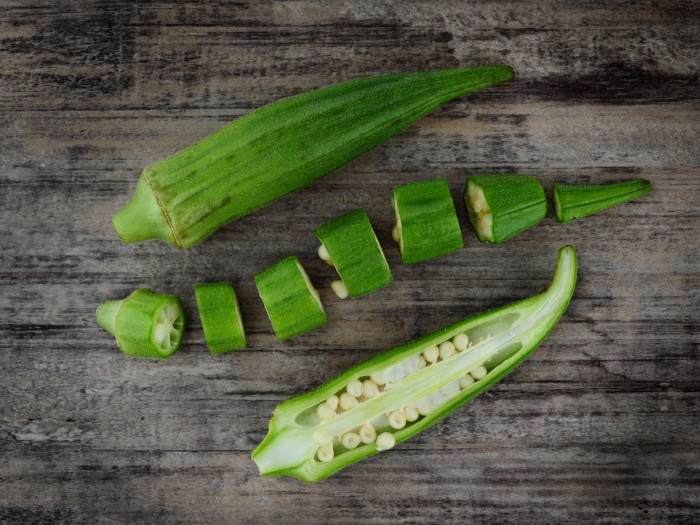 Okra may help reduce fatigue levels in the body. Researchers led by Fangbo Xia from Beijing, China in their study titled “Antioxidant and Anti-Fatigue Constituents of Okra” found that antioxidant-rich vegetable seeds may help reduce muscle tiredness. In a clinical trial conducted on laboratory mice, the swimming time of mice who were given the extract increased significantly as compared to the control group. Also, lactic acid levels were much lower in the mice that had the vegetable extracts, indicating a lower muscle weakness effect. The research study suggested that okra consumption could be related to improved metabolic capacity and improved ability stress of mice.

Researchers from the Shanghai University of Traditional Chinese Medicine found evidence that it may lower total cholesterol levels. In the study, the researchers administered obese mice with an ethanol extract of okra. The nutrients in the solution, including isoquercitrin and quercetin, helped reduce the levels of blood glucose, insulin, and total cholesterol levels.

Okra can be a dietary therapy source for hypertriglyceridemia, a condition that occurs when there is a high level of a certain type of fat (triglycerides) in the blood. People with hypertriglyceridemia, which may contribute to the hardening of arteries and subsequently, cardiovascular diseases. The aforementioned study was conducted in China and published in The Journal of Nutritional Biochemistry (July 2014). 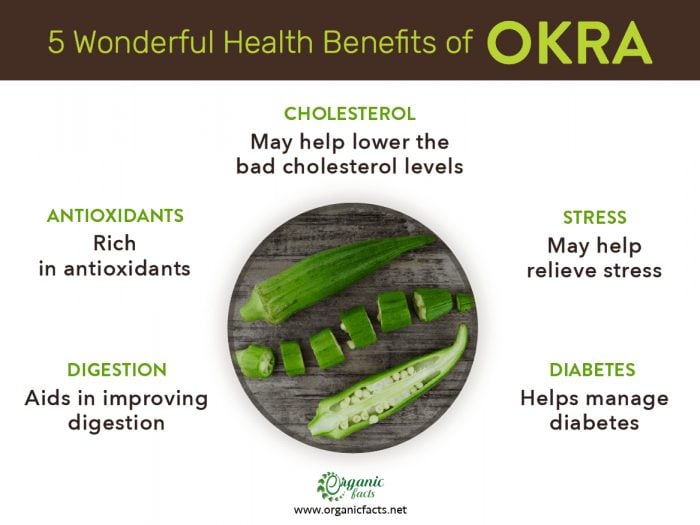 Okra has potent antioxidant power in its seeds and peel, which specifically help people with type 2 diabetes.

Researchers in India have found scientific evidence through a study conducted on laboratory rats that okra seeds extracts have anti-stress (adaptogen) properties. Adaptogens can help enhance overall health, as prolonged stressful situations can cause ineffective adaptation in the body, which includes reduced stamina levels and affect mood. According to the study not only can it help reduce stress levels, but it also has the potential to manage stress-related disorders and dementia. Further detailed studies, particularly with human subjects are required to explore this particular health benefit.

Word of Caution: People who are taking metformin to control type 2 diabetes should not complement it with excessive okra consumption. A study published in the International Scholarly Research Notices shows that consuming the vegetable may improve glycemic control but can interact with metformin and alter its absorption.

Enjoy okra in your favorite dishes and enlighten us with the latest health benefits of okra in the comments section below!