Sassafras trees, scientifically placed in their own genus of Sassafras, come in three different extant species, which are native to Eastern North America and parts of Asia. These trees are deciduous and can grow more than 100 feet in height, and possess unusual yellow or orange bark, making them easy to identify. [1]

In the past, Native American cultures and others around the world where the trees had been exported, used nearly every part of these trees, including the bark, stems, leaves, branches, roots, fruit, and flowers, for a range of medicinal, culinary, and cultural needs. This tree is packed with impressive nutrients, which is partly why it remained such an important resource.

Modern research has corroborated many of those traditional beliefs and supported the use of this plant in these ways, which is why the tree continues to be popular. Sassafras has a uniquely pleasant taste, which is why it is most commonly used to flavor other medicines, but that is not to take away from its individual potency. This tree and its composite parts have been used in foods ranging from root beer and salads to sassafras root tea and flavoring agents in Creole cuisine. Medicinally, it can be consumed directly, or topically applied. The concentrated essential oil of sassafras is very powerful, and should only be used with extreme caution, in small amounts, and with the direct oversight of a medical professional. [2] 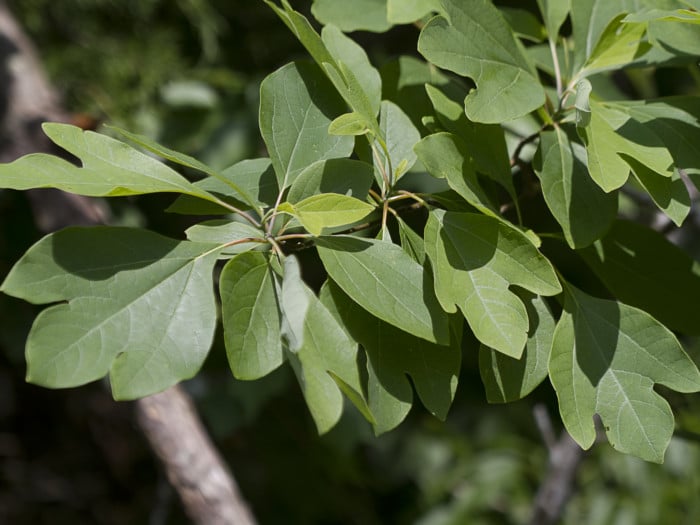 Medicinally, sassafras has been applied to insect bites and stings to relieve symptoms. Photo Credit: Shutterstock

Let’s take a closer look at the many impressive health benefits of sassafras.

Traditionally, sassafras has been used for many topical issues and skin health is no exception. If you suffer from boils, sores, rashes, or excessive marks on the skin, applying a poultice of sassafras leaves to the affected areas can quickly reduce the inflammation or discoloration of the skin. The presence of tannic acid and a unique compound called Sassafrid is believed to provide these benefits and protective measures to the skin. [3]

One of the most popular uses of sassafras is for rheumatism and gout, and this has been a trusted remedy for thousands of years in various parts of the world. Inflammation affects the body in many ways, which means that this impressive plant can also help improve gastrointestinal processes and the symptoms of arthritis, as well as headaches in some cases. Using this plant as a fever reducer is one of the oldest applications of this versatile plant! [4]

Modern research has determined that sassafras not only has analgesic properties, but also antiseptic ones, and these natural anti-microbial properties are ideal for boosting the immune system. By protecting the body against foreign agents and pathogens, both internally and externally, this remedy can be a sweet-smelling shield for your overall health. It can also help keep the stomach and respiratory system free from infections, which is why this plant was traditionally recommended to fend off colds at their onset. [5]

For centuries, sassafras twigs were the early forms of toothbrushes, because of the pleasant flavor (reminiscent of root beer) and the natural antiseptic properties. Using it in this way as a dental disinfectant is still a viable means of getting this benefit, and if you really want to try the traditional approach, grab a twig and give your teeth a scrub. Your gums might just thank you! [6]

Although safrole, an ingredient present in sassafras, has been the attention of controversy for some reason, it has also been of interest for its anticancer potential. A 2015 study that focused on the viability of safrole as a carcinogen in the case of gastric cancer, found it to induce apoptosis. Another research in the International Journal of Clinical & Experimental Pathology studied its anti-hepatoma effects. It suggests that safrole may have the potential to fight against hepatocellular carcinoma. [7] [8]

Exploring the appropriate potential and development of sassafras as well as safrole as an anticancer agent needs to be supported by further research and clinical studies.

The analgesic properties of sassafras are well known, and the leaves of this tree were often wrapped around wounds for their anti-inflammatory and analgesic nature. Sassafras tea is still used for pain-relieving purposes, and topical applications for aches and pains are popular in some natural healing communities. [18]

The pain relief side of wound healing is one thing, but actually speeding up the healing process is quite another. The stimulant nature of this remedy induces freshly oxygenated blood to the sight of the wound, which speeds up the body’s natural healing process and increases the rate of metabolic processes throughout the body. [19]

The stimulant nature of this plant is also great for an energy boost if you’re feeling a bit sluggish. Chewing on the leaves or drinking a cup of sassafras tea is an ideal way to rev up your internal engines and overcome excess fatigue or weakness. [20]

For women suffering from the painful symptoms of menstruation, such as bloating, cramping, and heavy bleeding, the analgesic and anti-inflammatory properties of sassafras are a boon. For thousands of years, this natural remedy has lessened the discomfort of menstruation for women and remains a popular recommendation from herbalists for women who suffer unusually painful periods. [21]

The leaves of sassafras are a well-known diuretic, which increases your urination, thus eliminating excess toxins, salts, and fats from the body. If you want to improve the health and functioning of your kidneys, the best way is to flush your system with a diuretic, and sassafras tea is a great way to do that. [22]

Word of Caution: The volatile oil of sassafras, which is known as safrole, is extremely powerful. While very small amounts can be safe, as little as a teaspoon can cause violent reactions of vomiting and nausea, while higher amounts can even be fatal. Always speak with a trained professional when adding a new herbal remedy to your health regimen, particularly one as powerful as sassafras! [23]

Rate this article
Average rating 4.0 out of 5.0 based on 149 user(s).
Read This Next:
Popular Articles