Stevia is the name given to a green leafy herbal plant, which is native to South America and has been used for hundreds of years because of its extremely sweet leaves. Stevia glycosides, mainly stevioside and rebaudioside are the active compounds responsible for its sweetness. Stevia has received its recent fame as being a sweetener that is more than 40x sweeter than sugar but does not affect blood sugar levels. It also does not have the negative side effects on the body, unlike normal sugar and is useful especially for diabetics. [1] [2]

It has more than 240 species of shrubs and small flowering plants in the Asteraceae family, which is the same family as sunflowers. Stevia is known by different names, including sweet leaf or sugar leaf, but the formal scientific name is Stevia rebaudiana. It grows in the tropical portions of North and South America, but it isn’t well-known as a plant.

As more and more research emerges about this wonderful new option for people on carbohydrate-controlled diets, the number of countries who are approving stevia as a sweetener and a food additive has been rising. In 2011, the EU gave permission for stevia to be used throughout the 27 nations.

Depending on the level of processing, stevia can be found in three forms. 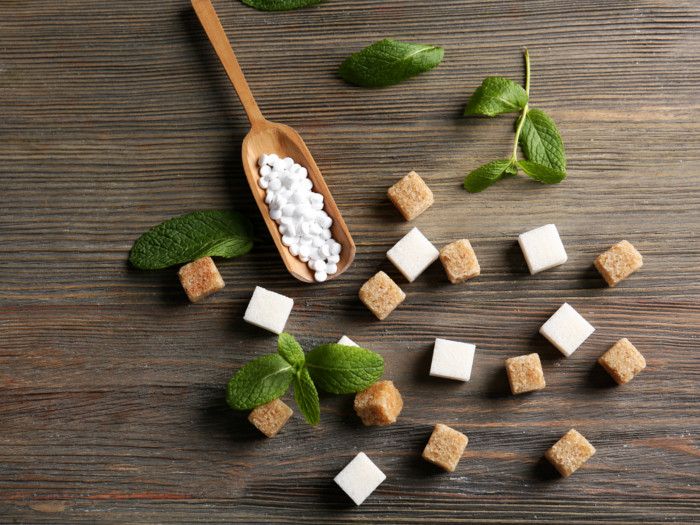 Stevia is valued most for the sweet taste, which makes it capable of replacing sugar in a diet. Importantly, it also has a very low calorific count pushing it in the ‘no-calorie’ food zone. [4]

There hasn’t been enough research done on the nutritional value of stevia. Currently, its leaf is not known to have any nutrients present in it other than carbohydrates and the earlier mentioned stevia glycosides. [5]

The most widely praised aspect of stevia for human health concerns is its ability to regulate blood sugar levels in the body. This is an ideal replacement for normal sugar for diabetics or people on carbohydrate-controlled diets because they can eat sweet foods without having to worry about diabetic complications.

Opposed to sucrose, which is what normal table sugar consists of, stevia sweetens food in a similar way as sugar, but it contains stevioside, which is a non-carbohydrate glycoside compound. As explained above, when stevioside breaks down, the glucose-containing particles are absorbed by the bacteria in the colon, rather than being absorbed into the bloodstream and affecting glucose levels in the body. [6]

Stevia is possibly low in calories and is anywhere from 40-300x sweeter than sugar, depending on the prevalence of certain extracts in the species variety. This means that people can eat foods like cakes, cookies, and candies made with stevia without worrying about gaining plenty of calories from sugars, so they won’t hurt their chances of successfully losing weight. This can also help in controlling excess sugar content in children’s diet. [7]

As mentioned, stevioside is a type of glycoside, but there are other glycosides in stevia that can actually relax the blood vessels, increase urination, and facilitate the elimination of sodium from the body. This means that less stress is put on the cardiovascular system and there can be a drop in blood pressure, which protects heart health and prevents certain conditions such as atherosclerosis, heart attacks, and strokes. [8]

The possibly rich source of antioxidant compounds that may be found in stevia makes it an ideal dietary supplement for the prevention of various cancers including pancreatic cancer. Dr. Jocelynn E. Thomas and Dr. Michael J. Glade published a report in The Open Obesity Journal, which states that stevia leaf extracts exhibit a high degree of antioxidant activity. It is also reported to inhibit hydroperoxides formation in sardine oil with a potency greater than that of
either L-α-tocopherol or green tea extract. [9]

Quercetin, kaempferol, and the other glycoside compounds in stevia help to eliminate free radicals in the body, thereby preventing them from mutating healthy cells into malignant ones. Antioxidants also help to prevent premature aging, cognitive malfunction, and various other conditions like heart disease. [10]

May Aid in Maintaining Oral Health

Stevia has been found to reduce bacterial formation in the mouth, making it a popular additive for toothpastes and mouthwashes. It may also prevent cavities and gingivitis, which sucrose certainly doesn’t do! [12]

Stevia is useful against skin conditions such as eczema and dermatitis. Topical application of it inhibits the spread of bacteria and acts as a steroid in these situations, making it a popular option for many people who can’t get relief from these conditions. [13]

Stevia, unlike sugar, may aid in increasing bone mineral density and treat osteoporosis. A study on animals shows its importance in increased calcium metabolism. Researchers are trying to find out different ways it could be used for human health. [14]

Along with all the health benefits mentioned above stevia is also known to possess anti-diarrheal, anti-hyperglycemic, antihypertensive, diuretic, anti-inflammatory, anti-diarrheal, and immune-modulatory actions. [15]

How to Use and Store

You can use stevia leaves, leaf powder or liquid form directly as a sugar substitute in various foods:

You could also use it in cooking various dishes at home. However, it is important to check the amount before adding it as a substitute for sugar because it is many times sweeter than sugar.

Note: Raw stevia has a long shelf life when stored in a cool and dry place. While exposure to humidity may lead to caking it would still be safe for consumption.

Although there aren’t any major side effects of stevia it is better to consume in moderation. So, here is the list of the possible issues that may be caused by stevia.

Unsafe variety: It is important to note that the highly refined varieties of stevia such as Truvia are recognized as unsafe for consumption by the Food and Drug Administration. Although the leaf and extract form of stevia is safe their effects on health are not quite known and more research is needed. However, research continues to support its use as a sweetener and as a food additive.

Allergic reactions: People who are allergic to ragweed, marigolds, daisies, and related plants may experience allergy symptoms. Also, some people have complained of bloating, cramping as well as occasional dizziness or headaches after eating stevia. These cases are rare, and it remains a safe and beneficial sweetener and plant additive for people around the world!

Rate this article
Average rating 3.9 out of 5.0 based on 279 user(s).
Read This Next:
Popular Articles