The health benefits of yacon may include its ability to regulate blood sugar levels, lower bad cholesterol, help with weight loss, improve the health of the liver, and boost digestive health.

Yacon is a large perennial plant that is mainly grown and cultivated for its tuberous roots. The scientific name of yacon is Smallanthus sonchifolius and it primarily grows in South America, including the Central and Northern Andes, which primarily fall in Colombia and Argentina. [1]

This vegetable wasn’t widely known outside of its native range until recent decades but is now cultivated in Australia and New Zealand, with its popularity spreading to Japan, China, South Korea, and even in the health food markets of the United States.

It has been a traditionally grown vegetable for thousands of years and has a wide variety of uses. The root can be eaten raw, like a potato or jicama. The juicy meat of the tuber is slightly sweet in taste. Yacon syrup and powder are commonly used as healthy replacements for sugar as sweeteners in various foods. The majority of the density of these vegetable tubes, which can grow up to 1 kilogram in weight, are fructooligosaccharides, which is an indigestible form of fructose. This unique quality of yacon is part of what makes it so valuable.

You can harvest yacon after the rhizomes at the top of the plant die and fall back, meaning that the tube underneath the ground is ready to be eaten. One of the best things about yacon is that it can easily be grown in home gardens and requires very little expertise or farming experience.

The leaves of the plant also contain a variety of beneficial organic compounds, which is why yacon tea and syrup have become valuable and sought after components to add to people’s diets. In fact, yacon syrup has had a recent surge of popularity, as it is claimed to not only be a superfood for diabetics, but also for people trying to lose weight. [2] 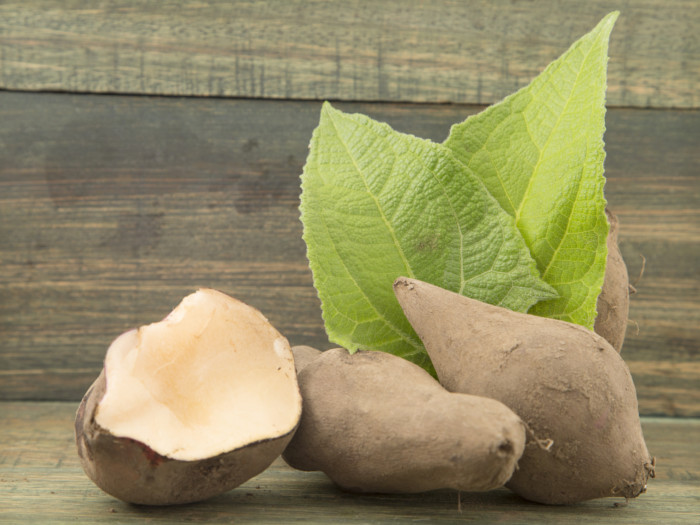 A 2018 research paper published in the Foods journal suggests that yacon has a low nutritive value. Having said that, the yacon root is mostly composed of fructooligosaccharides and water, but can also provide an ample amount of fiber. Moreover, its leaves also contain certain medicinal compounds. The best quality of this root vegetable is that it is low in calories and can work as a great food option for individuals with a sedentary lifestyle. The lack of starch in yacon makes it a potential dietary choice for people with diabetes as well. [3]

The health benefits of yacon include its ability to regulate blood sugar levels, monitor cholesterol, and aid in weight loss, among others.

May Help in Managing Diabetes

The reason that so many people around the world have begun to use yacon so often is its anti-hyperglycemic effects. The fructooligosaccharides in yacon mean that the body does not absorb any simple sugars; in fact, it may lower the amount of glucose production in the liver and may cause a shift to lower fasting glucose rates, as per a study published in the journal Nutrition and Diabetes in 2013. This is very important for people suffering from diabetes. [4] [5]

Research is also being done on yacon’s potential to increase insulin sensitivity in the body, yet another beneficial aspect for people at risk of developing the disease. [6]

Research has shown that consuming yacon may help in lowering of fasting triglyceride and low-density lipoprotein levels. In other words, the fructooligosaccharides that compose yacon may help to lower lipid levels and prevent the accumulation of bad cholesterol. This might aid in the prevention of a wide variety of heart concerns, including coronary heart disease. [7] [8]

Various researchers claim that eating yacon may help to increase weight loss. They base their claim on the fact that yacon is not composed of starch (like most tubers), but fills you up, and has a very low level of calories, which is thought to result in overall weight loss. [9]

In a 2008 study by the University Hospital Basel, Switzerland, the findings show that the low caloric content of yacon could be useful for treating obesity. [10]

According to a 2011 study published in the Trends in Food Science & Technology journal, yacon may contain prebiotic oligosaccharides that help in stimulating the growth and health of the microflora in our body. When our probiotic bacteria are well-taken care of and healthy, our body can maximize its intake of vitamins and minerals. Yacon is also found to be helpful in treating constipation as it is low in calories and rich in fiber. [11] [12]

The liver is the source of glucose in our body, so it makes sense that regulation of glucose through eating yacon would affect our liver health in some way. In fact, studies have shown that this root (particularly when combined with milk thistle) might prevent fat accumulation in the liver and maintain proper liver health and function. [13]

Word of Caution: Although it is rare, there have been some reports of allergies to this root vegetable. There is a 2018 research, which has witnessed anaphylaxis to yacon roots. The doctors generally recommend individuals keep away from including yacon in their diet. [14]

Furthermore, the leaves should only be used for tea, because they have been found to be slightly toxic to the kidneys when eaten directly.

Other than these two small issues, enjoy yacon and all the wonderful benefits it can bring to your health!

Rate this article
Average rating 4.2 out of 5.0 based on 416 user(s).
Read This Next:
Popular Articles