While it may have a hard to pronounce the name, jicama (HEE-Kah-mah) is a root vegetable native to central and South America and has been used for thousands of years as a dietary element and a medicinally beneficial substance. The name “jicama” is also the name of the vine of this vegetable, although the tuberous root is the most commonly eaten part. Some other names for jicama include Mexican yam or Mexican turnip. The scientific name of this root vegetable is classified as Pachyrhizus erosus.

The jicama root can grow up to 2 meters long and weigh up to 20 kgs at the extreme. It requires between 6-9 months of frost-free growth time and is cultivated in warm weather. Mexico and the surrounding areas of America are ideal for its growth. Its cultivation began in Mexico but soon moved to the Philippines; from there, it went to China and other parts of Southeast Asia. It is a popular culinary element in these cuisines.

The interior of the jicama is similar to a potato or a pear in terms of consistency and color. Like most root vegetables, it is high in starch.

Note: While the root is very beneficial and delicious, it’s important to note that the rest of the vine vegetable is highly poisonous, including the seeds!

Now, let’s explore the nutritional elements that make jicama so important for the diet of various cultures around the world. 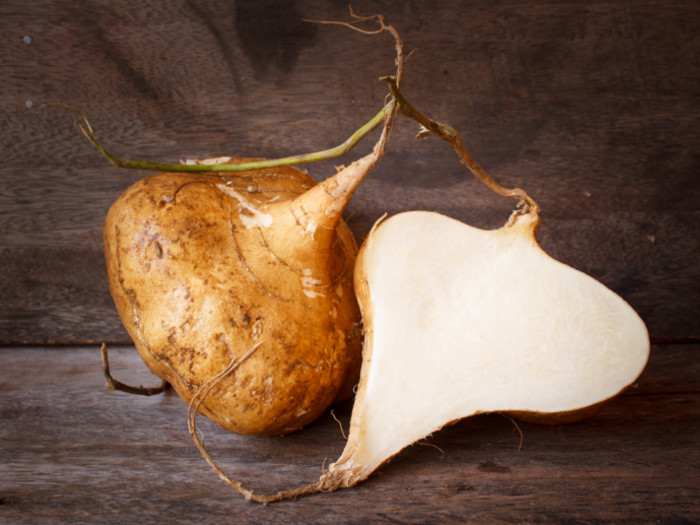 Jicama is low in calories as well as high in fiber and water. Photo Credit: Shutterstock

According to the USDA National Nutrient Database, this food has a unique mixture of vitamins, minerals, phytonutrients, and other organic compounds, including dietary fiber, vitamin C, vitamin E, folate, vitamin B6, pantothenic acid, potassium, magnesium, manganese, copper, iron, and a small amount of protein. Let’s see how these nutritional elements give jicama its unique health benefits!

Jicama provides many health benefits that include the following:

One of the most important elements of jicama is the high levels of dietary fiber. Research published in the journal Nutrients examined that foods with high dietary fiber content help increase the bulk of stool, thereby helping it move through the digestive tract and aiding conditions like constipation. Furthermore, jicama contains a rich source of a soluble fiber called oligofructose inulin, a sweet, inert carbohydrate that does not metabolize into simple sugars. This means that for diabetics, jicama can be a great way to have some sweet food without worrying about blood sugar fluctuation.

There is a very large amount of vitamin C found in jicama; 100 grams of jicama (about 3 quarters of a cup) gives approximately 40 percent of our entire daily requirement. Vitamin C (ascorbic acid) is an essential part of our immune system, as it stimulates the white blood cells, which are the body’s first main line of defense against illness. Vitamin C helps the body in battling bacterial, viral, fungal or pathogenic diseases.

This root vegetable is also known as Bengkoang in Indonesia. A study in 2014 in the journal Cytotechnology, suggests that the crude fiber and carbohydrates present in jicama could have positive effects on the human immune system.

The presence of dietary fiber in jicama makes it beneficial for your digestive system. According to a 2014 study led by Otles and Ozgoz, dietary fiber can offer protection against several conditions, including colon cancer, gastroesophageal reflux disease, duodenal ulcer, and certain gastrointestinal diseases, amongst others. Also, jicama roots are packed with antioxidants including vitamin C. According to the National Cancer Institute, antioxidants assist in neutralizing the effects of free radicals, which can in turn help lower the risk of several types of cancers, as well as heart diseases. However, further studies are needed to explore the link between jicama and cancer prevention in humans.

As a rich source of potassium, jicama is able to manage blood pressure. Potassium is a vasodilator and reduces the tension on blood vessels and arteries, thereby lowering stress on the cardiovascular system. Researchers from the University of Alabama conducted a study in 2010 which maintains that an increase in dietary potassium and reduction in sodium could positively impact blood pressure decline. This reduction is associated with improved heart health and stroke prevention. Potassium is also essential for maintaining fluid balance in opposition to sodium throughout the body, thereby keeping our body hydrated and functioning at a high level.

The significant amounts of copper and iron found in jicama also make it good for maintaining the health of the circulatory system. These two minerals are important elements of red blood cells; Adequate amount of these components allow oxygenated blood to flow through the body and may assist in preventing anemia.

Vitamin B6 has been linked to preserving your brain’s health and increased cognitive abilities; jicama has this vitamin in significant amounts. Furthermore, vitamin B6 is integral in breaking down proteins into usable amino acids, maximizing the metabolic processes and efficiency of various organs.

The minerals found in jicama – like manganese, magnesium, iron, and copper mean that this root vegetable can be a major booster for our bone mineral density. These minerals are essential for building strong, new bones and healing any damage to existing bones. This is a positive method for preventing the onset of conditions like osteoporosis, which millions of people suffer from worldwide.

Low-calorie foods are important for those trying to lose weight, especially when those low-calorie foods are also packed with nutrients and dietary fiber to make you feel full. Jicama only has 35 calories per 100 grams and is filled with nutrients, water, and fiber, which keep you satiated for longer. It is also an excellent snack to reduce your appetite and curb cravings without gaining any weight or losing any nutritional benefits.

Insulin resistance, which is a major cause of obesity, can be controlled and managed with the consumption of jicama as part of a healthy diet. A study conducted on mice by a team of doctors as recent as 2016, suggested that consuming jicama may increase insulin sensitivity and eventually decrease blood sugar levels.

Word of Caution: As mentioned earlier, the root of jicama is edible, but the rest of the plant is highly toxic. Be careful not to eat the seed pods, leaves or vines. Other than that, jicama is a healthy choice that can bring you a number of benefits!