What is a Kola Nut?

Although many people are familiar with the word “cola”, they may not realize that the source of that name is actually the Cola genus, which includes the kola tree where the kola nut comes from. The tree is native to the tropical rainforests of Africa and contains caffeine, which makes it desirable as both, a food source and an element in alternative medicine for some cultures around the world. [1]

Kola nuts are used as flavoring agents in the soda of many varieties, which is where the name “cola” arose. Kola nuts are often chewed or eaten in traditional ceremonies. While its most common application is as the flavoring agent, its medicinal benefits have begun to make it a popular dietary supplement for health. Kola nut can be found in energy drinks, dietary supplements, and performance enhancers. [2] 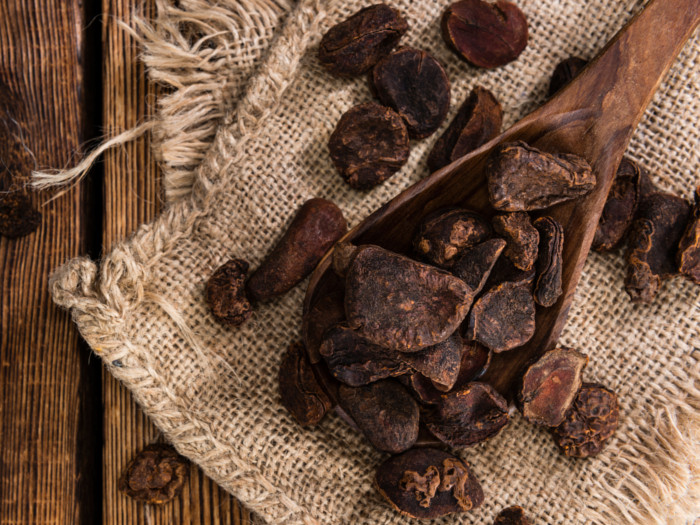 Now, let’s take a closer look at some of the health benefits of the kola nut.

One of the unique effects of the kola nut, largely due to its caffeine content, is its potential ability to stimulate the body and increase heart rate. While this can potentially be dangerous for people who suffer from pre-existing heart conditions, it can provide a necessary metabolic boost for those with a slow metabolism. This actually optimizes heart health, as caffeine can be a health stimulant in moderate doses. [3]

By stimulating heart rate and increasing circulation, kola nuts may boost oxygenation to certain essential parts of the body, including the skin, organs, and even the brain. This is why kola nuts are sometimes referred to as cognitive boosters, as increased levels of oxygen in the brain have been connected with potentially higher levels of cognition and concentration. This can also promote the healing of wounds and cellular repair through the increased flow of oxygen and nutrients. [4]

For thousands of years, kola nuts have been chewed or consumed by indigenous cultures in Africa both in ceremonies and in the treatment of digestive problems. The active ingredients of the kola nut may improve digestion and nutrient uptake, while also reducing constipation, bloating, cramping, and other, more serious, gastrointestinal issues. [5]

Although research is still in its early stages and is still a matter of debate in some circles, some of the phytoestrogens and phytoandrogens that may be found in kola nuts are able to stimulate apoptosis in prostate cancer cells. This line of study is relatively new, but applications for other types of cancerous cells are also being explored. [6]

According to a 2009 research by the Department of Chemistry, Southern University Baton Rouge, USA, kola nuts contain bioactive compounds that show cytotoxic properties and can induce apoptosis in breast cancer cells. [7]

May Boost the Immune System

The roots, stems, and leaves of the kola tree have volatile compounds that can prevent certain bacterial infections in the human body. These bacterial infections may include those responsible for causing a wide range of respiratory illnesses like bronchitis. Kola nut extracts are available in most health stores, but the nuts themselves have not been directly connected to this medicinal benefit. [8]

Although caffeine has long been known as an appetite suppressant to a certain degree, kola nut extracts have also been connected with increased fat-burning in the body, possibly due to the positive impact on metabolism that these nuts can have. [9]

The Kola nut is a cultural staple amongst certain African countries, popular for its effects as a central nervous system stimulant. Let us have a look at its diverse uses.

Kola nut is power-packed with nutrients. It contains about two to three percent caffeine and one to two percent theobromine, both of which act as stimulants when consumed. [10]

Caffeine is a stimulant often found in coffee and soft drinks. Moreover, theobromine is also found in green tea and chocolate.

Kola nut also has the highest moisture, crude fat, and crude fiber contents of 66, 5.71, and 7.13%. Moreover, it is also rich in micronutrients that include potassium, magnesium, and calcium.

Word of Caution: The significant level of caffeine found in kola nut extracts and supplements can be a risk for those who already suffer from high blood pressure or sensitivity to caffeine. Its side effects include shaky hands, upset stomach, and insomnia, as caffeine is a powerful stimulant. Consult a medical professional before a kola nut addition to your dietary regimen.

Rate this article
Average rating 3.8 out of 5.0 based on 502 user(s).
Read This Next:
Popular Articles