Herring is a delicious oily fish with a long history in many cultures around the world as a dietary staple. This fish also serves many amazing health benefits which include improving the heart health.

Herring is a general term for various foraging fish from the family Clupeidae who are commonly found in the northern regions of the Pacific and Atlantic. They are often found near the northern coasts in large schools, as well as along the South American coast. The three most common types of this fish include the Atlantic, Pacific, and Araucanian varieties, but there are also a few dozen other species that are frequently referred to as herring. When it comes to taste, these fish are very salty and oily and are typically salted, drained, and then mixed with a sweet-and-sour solution in a can. While they physically resemble silver sardines and belong to the same taxonomic family, they are not the same fish and have some key differences. They are generally considered healthy when consumed in moderation. [1] 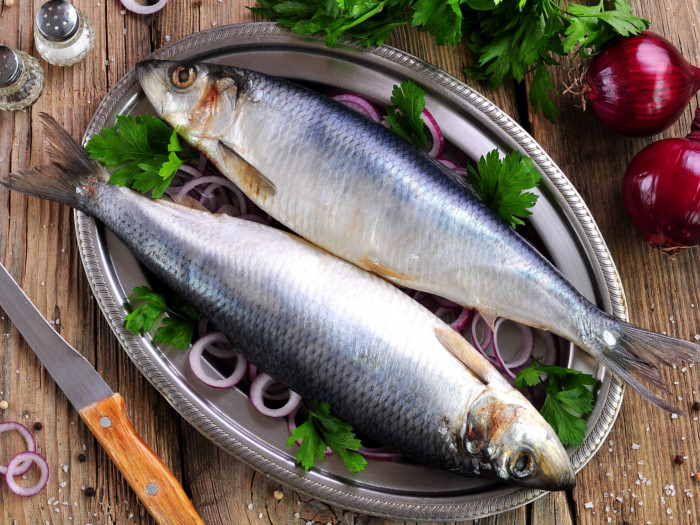 In terms of nutrition, a 3-ounce serving delivers approximately 135 calories, 15 grams of protein, and 8 grams of fat, but only 20% of that is of the saturated variety. These fish are also high in selenium, omega 3 fatty acids, B vitamins, vitamin D, iron, magnesium, calcium, and potassium. [3]

The many health benefits of herring include the following:

While herrings and sardines are often mistaken for one another, there are some clear differences between the two.

The common side effects of eating this oily fish include problems with pregnancy, due to the high concentrations of certain nutrients and fats, as well as high levels of sodium. Allergic reactions may also occur in some people who are sensitive to these types of oily fish. Always consume in moderation, due to the high sodium and fat content. [5]

Rate this article
Average rating 3.7 out of 5.0 based on 11 user(s).
Read This Next:
Popular Articles