Jujube tea has been a traditional remedy for more than 4,000 years and remains a valuable and impressively healthy beverage.

What is Jujube Tea?

Jujube tea is a traditional tisane or herbal tea made from the dried fruit of the Ziziphus jujuba bush, which is native to northern India and the regions of China. The fruit is also known as Chinese date or red date. The tea itself is actually believed to have Korean origins, however, and is known as daechu-cha [1] in that country. The color of the tea is a deep ruby or maroon red, similar to the color of the original dried fruit. The reason this tea has been so widely used and respected for thousands of years is the dense nutrient composition, including certain unique antioxidants. This tea can provide vitamin C and various polyphenols, as well as potassium, iron, and various B vitamins.

The most important benefits of jujube tea may include its possible ability to relieve constipation, strengthen the immune system, boost bone health and increase circulation, among others. 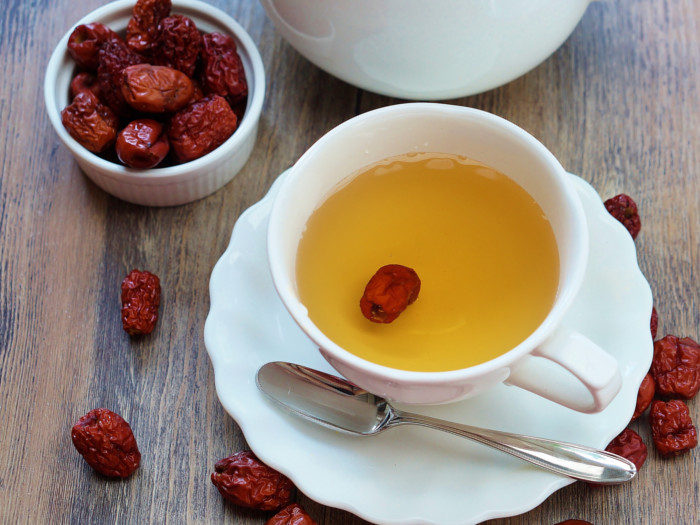 Jujube tea is a great way to increase your intake of vitamin B and C. Photo Credit: Shutterstock

With good amounts of vitamin C and certain other flavonoids, this tea packs a lot of potential antioxidant power into every cup, which can help decrease inflammation and oxidative stress throughout the body, lowering your risk of chronic disease. [2]

This tea is known to have stimulating effects on the gastrointestinal system and is able to relieve irritating symptoms of constipation, irritable bowel syndrome and other common stomach problems. [3]

For thousands of years, this tea has been traditionally used to soothe the body and mind, and modern research has shown that it can help to lower stress hormone levels and reduce anxiety and mood swings. [4]

The immune-strengthening power of this tea is well known, and it can help to soothe the common cold, flu symptoms, and fever. The vitamin C levels in this tea will stimulate the production of white blood cells, the primary line of defense for the body. The anti-inflammatory effects will also relieve sore throats. [5]

There is a decent amount of minerals found in this tea, namely iron, calcium and phosphorous, which can help to improve bone mineral density and protect against osteoporosis.

As mentioned, this tea can soothe the mind, which may also makes it a great natural sleep aid to consume right before going to bed.

This tea possesses high levels of iron, which is excellent for circulation, as it is necessary for every red blood cell. This means more oxygenation to the parts of the body that need it, while the potassium helps to decrease blood pressure. [6]

The flavonoids and phenolic compounds found in this tea are able to neutralize free radicals before they can do damage to the skin, thus preventing wrinkles, age spots, and blemishes. [7]

How to Make Jujube Tea

Making jujube tea is quite simple at home, provided you have the right ingredients. While some people make a pure jujube tea, many others prefer to include other spices and ingredients for flavors, such as cinnamon and ginger. Take a look at the recipe below.

You can serve it with a few pine nuts in the tea.

Despite the many benefits, there are some side effects, such as complications with pregnancy and potential drug interactions. As with any herbal teas, only use jujube tea in moderation. Conflicting research on the safety of this tea for pregnant women has led to a general recommendation to avoid it. If you are a diabetic, this tea can lower your blood sugar dangerous, so take precautions. Speak with your doctor about any pre-existing conditions or prescriptions before adding this tea to your routine.

Rate this article
Average rating 4.0 out of 5.0 based on 43 user(s).
Read This Next:
Popular Articles