If you drink lapsang souchong tea, you will experience many of the same health benefits that people have been enjoying for thousands of years.

What is Lapsang Souchong Tea?

Lapsang souchong tea is a particular type of tea cultivated in the Wuyi region of China, although now it is grown more widely than that. What makes the leaves of this tea special is that instead of drying them in a more traditional way, they are dried over a pinewood fire, giving the leaves a smoky flavor that makes the tea quite popular. This tea comes from the traditional Camellia sinensis plant, and therefore has the normal antioxidants and nutrients of that tea, but the preparation method and flavor is what sets it apart. [1]

This tea variety does contain caffeine, so it should be consumed in moderation, particularly by those who need to limit their intake of caffeine.

There are quite a few benefits to lapsang souchong tea, including its ability to protect cardiovascular health, boost the immune system, and lower inflammation levels in the body. Much of this is done by the antioxidants in the tea, which include catechins, polyphenolic compounds, and other volatile acids that have such an impressive effect on the body. [2]

The caffeine present in this tea can also act as a metabolism booster that will enable you to lose weight more easily. While caffeine is known to exacerbate nervous system conditions, this tea is actually well known to soothe the nerves and lessen anxiety. [3] 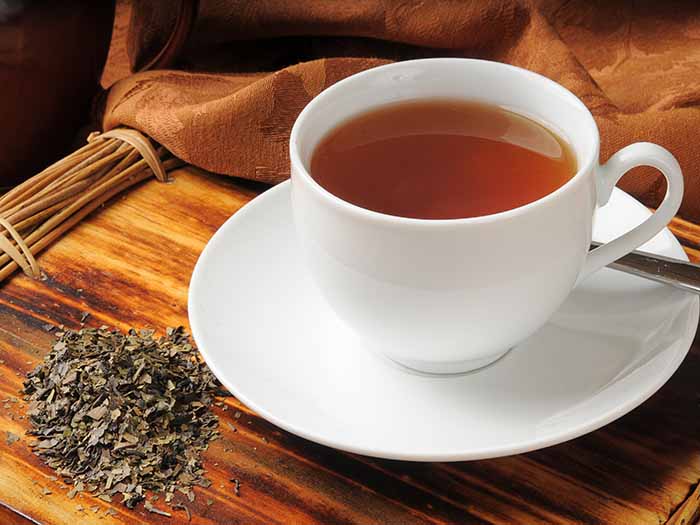 How to Make Lapsang Souchong Tea?

If you wish to make your own lapsang souchong tea at home, you can source the leaves from many different places, although leaves directly from the Wuyi province are increasingly rare and expensive, due to demand.

Lapsang Souchong Tea is a kind of Chinese black tea, which is also referred to as Smoked Tea because the tea leaves are smoke-dried over pinewood fires. The tea is known for its interesting smoky flavor.  But how do you make this Chinese beverage in the comforts of your home? Let's find out.
0 from 0 votes
Print Pin Rate
Course: Beverage
Cuisine: Chinese
Keyword: Lapsang Souchong
Appliance: Stove
Prep Time: 5 minutes
Cook Time: 10 minutes
3 minutes
Total Time: 15 minutes
Servings: 4 people
Author: Ishani Bose
[4] [5]

You can also keep a close watch on the temperature of the water. Remember that boiling water will give you a smokier, earthier and a harder, astringent-like tea, while cooler water will have a fruitier and milder flavor.

As with any form of black tea, lapsang souchong contains caffeine, which can cause anxiety issues and sleeplessness if consumed in large quantities, along with gastrointestinal distress. If you are sensitive to caffeine, be sure to limit your intake of this tea to 2-3 cups per day. [7]

Rate this article
Average rating 4.5 out of 5.0 based on 22 user(s).
Read This Next:
Popular Articles