Many people wonder about the best milk substitute, both for cooking and for health reasons; fortunately, there are plenty of excellent options for replacing milk in your diet.

The top milk substitutes include almond milk, soy milk, rice milk, hemp milk, and water, among others. You can also substitute milk with coconut milk, plain yogurt, and sour cream.

For people who don’t want to drink animal-derived milk, coconut milk is popular, but it is extremely high in sugar, and should not be consumed in large quantities. Similarly, if you use coconut milk to replace regular milk in a recipe, it will change the overall nutrient composition of the meal, as well as the flavor. [1]

Unsweetened varieties of almond milk are quite similar to regular milk, but they do have a higher concentration of beneficial fats, which can be good for your health when consumed in moderation. 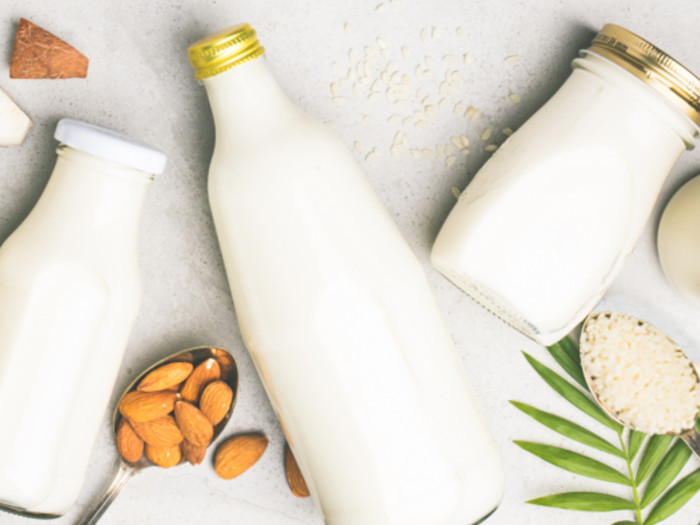 For those who are lactose intolerant, there are many different milk substitutes available. Photo Credit: Shutterstock

Another popular plant-based milk is rice milk since there is no lactose or other allergens; it can also easily be fortified with vitamins and nutrients.

If you use plain yogurt, another dairy product, as a milk substitute, be sure to cut it with a bit of water to make the consistency more similar to milk before adding it to your recipe. The good thing about using yogurt is the nutritional boost that it will provide you with, as well as a higher concentration of probiotics and nutrients.

Depending on the recipe, sour cream can be an effective substitute for milk, particularly in cream-based dishes, soups and pasta meals, such as macaroni cheese. While the flavor of sour cream is quite strong, and this milk substitute won’t always be appropriate, but it is an option for certain meals and recipes.

The flavor of hemp milk is quite strong, particularly compared to the neutral or bland flavor of normal milk, but it does not contain lactose and is a favorite of many natural practitioners and those who eat organic. Hemp milk should be used in slightly smaller quantities than the amount of normal milk a recipe calls for.

The classic replacement for milk is water since it can provide a similar consistency as milk in certain recipes. However, milk is more of a binding agent and results in richer, more flavorful recipes, particularly desserts. Water should only be used when no other milk substitutes are available.

Jinal, an ex-banker who has completed her MBA in finance from Mumbai University, is passionate about health and wellness. She is a social media enthusiast. She has completed an online program on “Introduction to Food and Health” from Stanford University, US. On weekends you can find her in cafes or movie theaters. Positivity drives her and she finds peace in cooking, reading, and coffee!
Rate this article
Average rating 3.2 out of 5.0 based on 12 user(s).
Read This Next:
Popular Articles