What is Mushroom Coffee & Is It Good For You

Mushroom coffee may sound revolting to a traditional coffee-drinker, but it is one of the latest health trends like other coffee variants such as grass-fed butter-filled coffee. But is this a marketing gimmick or are there benefits to sipping this fungi-flavored drink? Let’s find out.

What Is Mushroom Coffee?

Mushroom coffee is made from regular coffee that has been blended with concentrated mushroom extracts. The mushrooms used for this kind of coffee have potent medicinal properties and they are usually utilized in Chinese traditional medicine. These mushrooms include lion’s mane, reishi mushrooms, chaga mushrooms, and cordyceps. [1] [2] 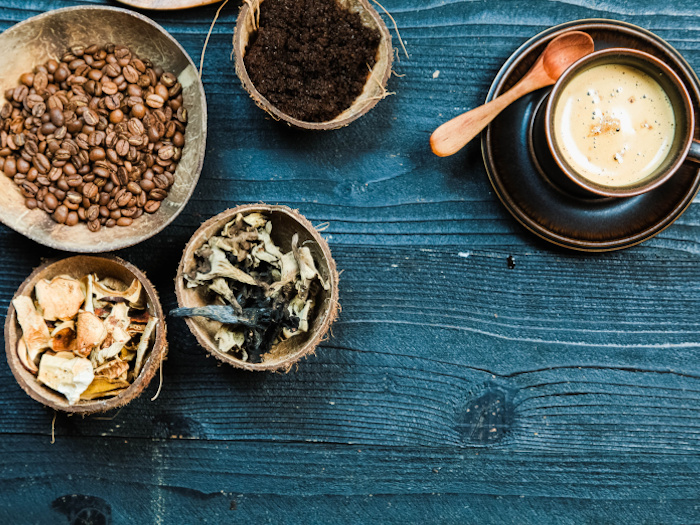 Research shows that mushroom coffee is not a new trend. In the 1940s, the Finns brewed chaga when coffee and other rations were in short supply during the Second World War. Chaga, malt, and chicory were considered cheap alternatives to coffee. A coffee-like beverage made from brewing chaga made a comeback in 2017 and now, several health companies are developing different kinds of coffee with mushroom extracts. [3]

Coffee. blended with mushroom extract, is generally pricey and can be purchased from specialty health stores or websites.

There are a lot of health claims made about this coffee blend, especially by the companies who are selling the brands. The top health benefits of mushroom coffee include:

However, these health claims are not corroborated by research studies and findings from clinical trials. However, the mushrooms used do have science-backed health benefits. Let’s take at the most important benefits:

Reishi mushrooms: Findings of a clinical trial published in the Journal of Medicinal Food concluded the reishi extract helped reduce fatigue levels in people suffering from neurasthenia, a condition characterized by fatigue, headache, and irritability, chiefly caused by emotional disturbance. [4]

Chaga: Animal and test-tube studies revealed that chaga mushroom water extract had immunomodulatory effects and showed the potential to recover the bone marrow system damaged by chemotherapy in immunosuppressed individuals. [5]

Lion’s mane mushroom: Animal models have shown the extract of lion’s mane mushrooms can help lessen the loss of memory in mice. It also has a protective effect on neurons in the brain and can prevent damage caused by amyloid-beta plaques. [6] [7]

Cordyceps: A report published in the Journal of Dietary Supplements suggested that supplementation with a cordyceps containing mushroom blend may improve tolerance to high-intensity exercise and boost performance levels. [8]

However, you can get these health benefits if you include mushrooms in your daily diet. For more, you can read our articles on Mushroom: Top Benefits & Side Effects as well as 15 Types Of Mushrooms & How To Use Them.

How to Make Mushroom Coffee?

For purchased brands, you can follow the packaged instructions to make your cup of coffee. Alternatively, you can grind your coffee beans and add your favorite brand of mushroom powder. You can also add it to the mushroom powder to your prepared coffee cup but it may not have a very pleasant taste.

If you plan to make your own mushroom coffee blend at home, it is advisable to check the side effects of the mushroom powder being used. Chaga and reishi mushrooms are known to have some side effects and may interact with certain medications. Also, women who are pregnant or are breastfeeding should exercise caution while using mushroom powders as enough research has not been done to understand the potential side effects. [9]

Word of Caution: There are no documented risks or side effects of mushroom coffee. However, if you are having it for health reasons, do keep a tab on how many cups you consume in a day as it does contain caffeine. According to the USFDA, 400 milligrams of caffeine a day for healthy adults are not generally associated with dangerous, negative effects. It is also advisable to not add a lot of creamer and sugars if you are watching your calorie intake. [10]