You may have never seen an Orange Watermelon before, but they are a delicious and unique addition to any summer barbecue and offer an impressive amount of health benefits.

What is an Orange Watermelon?

Orange watermelon is a colored cultivar of the Citrullus lanatus but is quite similar to traditional watermelons in size, sweetness, appearance, and texture. The difference in color is primarily due to the concentration of pigment cells, such as lycopene and beta-carotene. Red watermelons have a high level of lycopene – the same chemical that makes tomatoes red, while orange watermelons have a balance between lycopene and beta-carotene, resulting in its orange appearance. What many people don’t realize is that watermelons were originally cultivated to be yellow and orange, while the globally recognized red watermelon was only cultivated later. [1]

The outside of an orange watermelon is green and striped, like traditional watermelons, and it usually weighs between 10 and 30 pounds when fully developed and ripe. If you are looking for this type of specialty watermelon, it may be marketed under a number of other names, such as Orangeglo, Orange Sunshine or Honeyheart. [2] 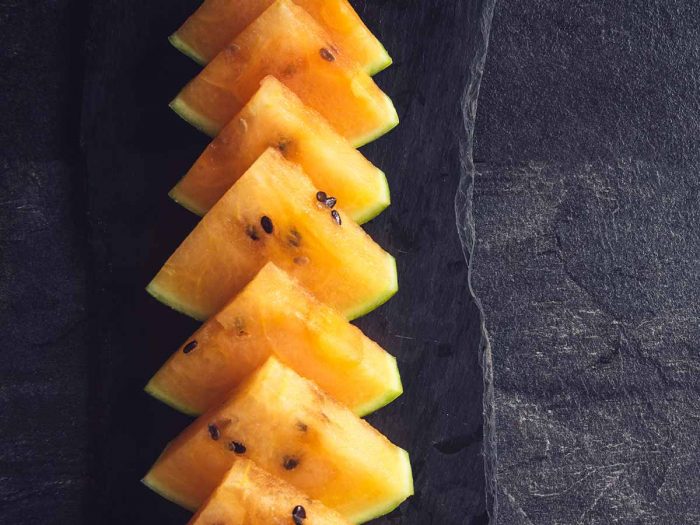 Orange watermelon possesses many of the same nutrient qualities as red watermelons, with a few notable differences. These watermelons are high in fiber, protein, carbohydrates, vitamin C, vitamin A, and potassium. More than 90% of these fruits are composed of water, in addition to having roughly 45 calories in a 1-cup serving. Without any fat or cholesterol, these fruits are generally considered very healthy. Orange watermelons have higher levels of beta-carotene than traditional watermelons, which could slightly alter the antioxidant activities of this fruit in your body. [3]

People tend to use orange watermelon as an occasional summer treat, mixed into fruit salads, or blended up into fruit smoothies. It is important to remove the seeds for certain preparations, but not all. Some people prefer to grill this type of watermelon, as the high concentration of sugars will begin to caramelize and enhance the sweetness. Slicing this fruit into cubes, or scooping out watermelon balls can also be a refreshing addition to green salads, along with walnuts, pears or feta cheese. You can also pickle the rind of these watermelons, or use slices as garnishes for cocktails and cold soups.

The primary difference between a red watermelon and orange watermelon is their concentration of active ingredients. If beta-carotene causes foods to have a yellow pigment, and lycopene provides a red color, then the balance of these two compounds would result in an orange fruit. That is the case of orange and red watermelon; the former has more beta-carotene than the latter, resulting in the surprising disparity in color. Aside from this difference in chemical composition, these two fruits are very similar. In terms of size, it is very similar to “Crimson Sweet” and “Millionaire” watermelons – two red variants of this fruit. [4]

There are more than a dozen different watermelon varieties, including pink, yellow, orange and white watermelons; the color difference is natural in some cases, while other variants are specifically bred to have their unique shape and color.

Rate this article
Average rating 4.1 out of 5.0 based on 28 user(s).
Read This Next:
Popular Articles