Knowing the best potato starch substitutes can come in very handy when you find yourself lacking this critical ingredient in the kitchen.

Potato starch is derived from potatoes and is often used as a thickener in soups and sauces. It has the benefit of being easy to add to dishes at the last minute, as well as being tasteless and usually inexpensive. Potato starch is also gluten-free, which has made it increasingly popular in recent years. [1] 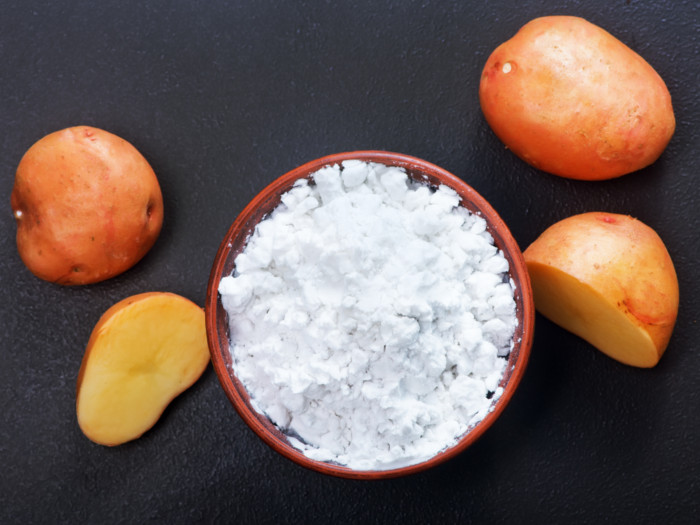 You can use potato starch in place of cornstarch in baking. Photo Credit: Shutterstock

This substitute is often found under the name arrowroot flour, but they are the same product. Extracted from the roots of a South American plant, arrowroot starch is a popular ingredient in vegan cooking. It is also used in many gluten-free flour blends and boxed mixes, as it adds lightness and structure in place of the gluten. Arrowroot is also popular with many people on specialty diets who are trying to avoid corn and potatoes. When substituting, two teaspoons of arrowroot powder will replace one tablespoon of potato starch. [2]

Cornstarch is a derivative of corn that is traditionally used to thicken pie fillings and puddings, in addition to making crusts and doughs. It gives sauces and fillings a signature glossy shine, without much clumping, and is flavorless and tasteless. It can be substituted for potato starch at a 1:1 ratio.

Tapioca starch is derived from the cassava root, the most nutrient-dense part of that South American plant. It is also popular in gluten-free bread and baked goods, as it gives the dough good structure and a crispy crust. It does add a bit of sweetness and chewiness though, so substitute accordingly. [3]

If you are not avoiding gluten or grains, common wheat flour can also be used as a thickener. Unlike potato starch, which can be added at the end of a recipe and still thicken, the use of wheat flour requires making a roux as a thickener at the beginning of the recipe. Otherwise, the flour may cook too quickly and clump, resulting in an unappetizing texture. [4]

Rice flour has the same thickening properties as wheat flour but is a great alternative for people actively avoiding any gluten consumption. It has a light texture, no taste, and binds ingredients together well, preventing them from separating while cooking. Like wheat flour, rice flour should be used as a roux and prepared at the beginning of the recipe.

Rate this article
Average rating 4.4 out of 5.0 based on 7 user(s).
Read This Next:
Popular Articles