Beginning a family can be an unpredictable event, and having a pregnancy after 40 can present some extra challenges for a mother. While having a healthy baby at a slightly older age is certainly possible, it is important to understand some of the potential risks and symptoms, as well as some of the advantages of having a baby later in life.

What is Pregnancy after 40?

In the past, having a pregnancy after 40 was much rarer, both because of the increased risks to the mother, as well as general societal traditions. In the past two decades, however, the number of babies born to women aged over 40 has increased significantly. Based on the changes in lifestyle and professional opportunities for women, as well as more advanced medical knowledge and longer life spans, women aren’t limited to beginning their family in their 20s or 30s. [1]

Although the pregnancy rate for women over 40 is still about 0.1% of all births, that still represents a significant number of births each year. Depending on your individual health and wellness, having a pregnancy after 40 can be perfectly healthy. 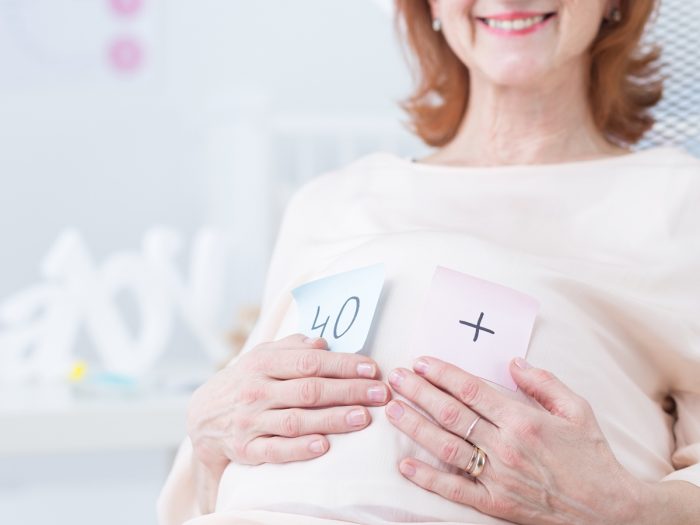 Most women over 40 have healthy pregnancies and healthy babies. Photo Credit: Shutterstock

How to Get Pregnant After 40?

Despite what some people say, it is not impossible to get pregnant after 40, as the mechanism is still the same – the fertilization of a viable egg with healthy sperm. However, as women age, their egg supply decreases, resulting in a sharp drop in the fertility rates after a woman turns 40. You can begin to see this decrease after age 35, which is another pregnancy milestone to which many people pay attention.

After the age of 45, it is nearly impossible to get pregnant without the help of various fertility treatments, such as intrauterine insemination or in vitro fertilization. However, in the first few years of your 40s, traditional sexual intercourse is still very much an option. [2]

What are the Chances of Pregnancy after 40?

As mentioned, your chances of becoming pregnant after 40 do drop considerably, as your egg supply steadily decreases, but every woman’s body is different, and natural pregnancies can occur well into your fifth decade of life.

The best options for increasing your chances of a successful pregnancy include using donor eggs or fertilization treatments.

Symptoms of Pregnancy After 40

The symptoms of a pregnancy after 40 are quite similar to regular pregnancy and include emotional changes, headaches, urination, fatigue, nausea, missed periods, incontinence, morning sickness, backaches, and tender breasts. While these may be obvious pregnancy signs to a younger woman, many older women who get pregnant think they may be experiencing the beginning of menopause. This may prevent them from seeking prenatal care with a doctor, where a pregnancy diagnosis can be made. [4]

Risks of Pregnancy After 40

While the symptoms of pregnancy may be similar, there are significantly more risks to pregnancy after 40, such as gestational diabetes, preeclampsia, miscarriage, placental issues, and stillbirth, says a report published in the Obstetrics and Gynecology Journal. Maternal age plays a large role in the body’s ability to properly support a growing fetus and deliver the proper nutrients. Birth defects and Downs’ Syndrome are also more likely in older mothers. All that being said, there are still many successful and healthy births to mothers over 40 years old. [5]

Advantages & Disadvantages of Having a Baby After 40

There are both pros and cons of having a baby after 40. Some of the negative aspects and risks have already been explained, but in terms of advantages, you have more life experience, increased brain power, financial stability, professional satisfaction, and a longer life expectancy, among others. [6]

Brain Power – Later in life, you are often more capable of handling the emotional weight and difficult decisions of parenting, thanks to your life experience and cognitive development.

Professional Life – Having a child later in life will often allow you to pursue your professional goals first, and have a stable career to return to after the child is born. [7]

Life Expectancy – Research has found that women who have children later in life tend to have an extended life expectancy.

Financial Stability – Having a pregnancy after 4o likely means that you are more financially stable and able to provide for all of your child’s needs. [8]

If you are nearing or past the age of 40, and are still interested in getting pregnant naturally, you need to accept that the chances of success are much lower, while the risks to both the mother and child are higher. That being said, with the help of doctors and proper prenatal care, it is possible. Your doctor can also explain different fertilization options. [9]

Rate this article
Average rating 3.8 out of 5.0 based on 25 user(s).
Read This Next:
Popular Articles