The most effective home remedies for gestational diabetes include the use of vitamin D, vitamin C, astragalus, dietary scheduling, protein, whole food carbs, a sugar-free diet, flaxseed, and exercise.

Some of the home remedies for gestational diabetes are as follows:

One of the major causes of all forms of diabetes is an irregular eating schedule. It can teach your body to expect massive influxes of sugar and calories, followed by long periods of no nutrients. This can seriously complicate your body’s natural metabolic activity and negatively affect the functionality of your insulin receptors. A great way to start treating or preventing gestational diabetes is to put yourself on a strict schedule of nutritional intake. Experts actually recommend eating small meals every two hours so your body becomes used to regular processing and absorption of nutrients, helping to prevent the peaks and valleys of blood sugar levels that characterize diabetes. [1]

As with other forms of diabetes, regular exercise can help to prevent a sedentary lifestyle and unhealthy weight gain. Obviously, during pregnancy, weight gain is expected, but it can certainly be managed in a healthy way. Regular periods of thirty minutes of exercise at least twice per day will get your heart rate up, stimulate the metabolism, and prevent the development of gestational diabetes. Obviously, jogging and other strenuous exercise aren’t recommended, but swimming, stationary exercise machines, and any sort of light cardiovascular exercise (even walking around the block a few times per day) will help to prevent or minimize the symptoms of gestational diabetes. [2] 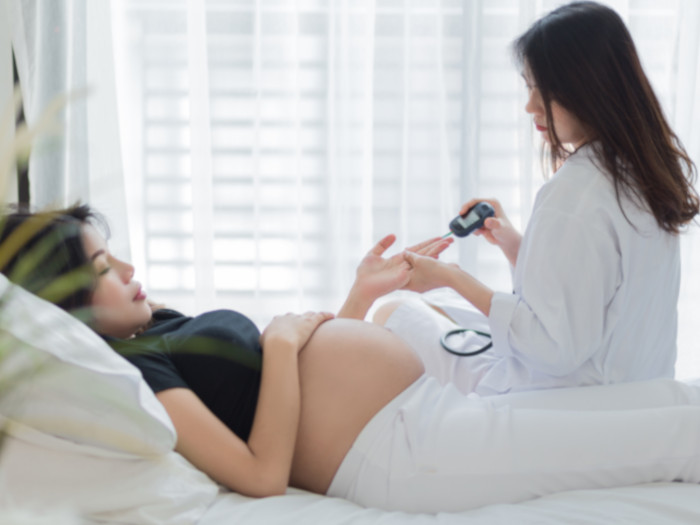 One of the most common suggestions for diabetes management and treatment is to increase your fiber intake. Fiber can stimulate the activity of insulin receptors and can also inhibit the release of excess insulin into the bloodstream, helping to balance the levels of insulin and prevent the onset of diabetes. Fiber should be a part of your pregnancy diet anyways, due to its key digestive and cardiovascular effects, but its specific relation to insulin receptors makes it crucial. Flaxseed and other forms of fiber are easily found in markets around the world. Whole grains are some of the best sources of dietary fiber that will improve your chances of avoiding gestational diabetes. [3]

Although this isn’t a vitamin that gets as much attention as others, it is crucial for a number of processes in our body, including the efficient absorption of key vitamins and nutrients, including calcium, iron, magnesium, and phosphate. By maximizing the nutrient absorption of your gut vitamin D-rich foods, such as salmon, mushrooms, or tofu, you can guarantee that your nutrient intake is effective and constant throughout the day. Vitamin D also helps to stimulate the growth of beneficial bacteria in the gut, which is essential for a healthy pregnancy. [4]

Unlike vitamin D, vitamin C gets a lot of attention from medical professionals and the general public. However, that doesn’t mean that pregnant women get enough of it, but they should, as vitamin C deficiency has been directly linked to gestational diabetes. Research has shown that in women with gestational diabetes, those who increased their vitamin C intake were far less likely to experience serious symptoms and had a lower chance of developing Type 2 diabetes later in life. [5]

Research into herbal remedies for gestational diabetes are ongoing and widespread, but astragalus may have been shown to have the strongest effects. Research has revealed that women who have astragalus along with their traditional treatments for this forms of diabetes demonstrate significantly better blood sugar control and have much milder symptoms of gestational diabetes. However, due to the fact that herbs can have complex side effects, it is important to speak to a medical professional before adding any herbs to your regular diet, particularly during the delicate period of pregnancy. [6]

One of the important functions of protein in our diets is to help us break down carbs into more manageable and useful molecules. Therefore, if you are following the recommendation of eating a number of small meals throughout the day, then try to always pair carbs with a protein. This will ease the digestive process and regulate your metabolism to only release or utilize the necessary amounts of insulin. Protein is also essential for growth and development, which is critical when you are growing another person inside of you! 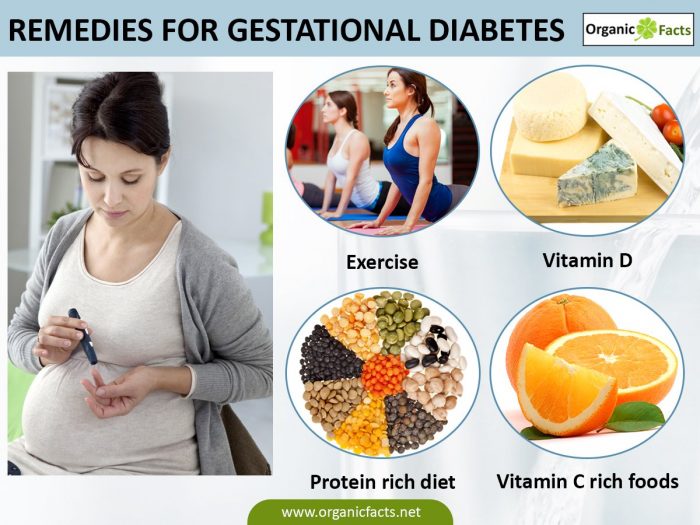 A well-ballanced nutritional diet & regular exercise are a must to combat gestational diabetes. Photo Credit: Shutterstock

It is important to remember that not all carbs are created equal. Complex carbohydrates break down to more valuable forms of sugar that are harder to digest and have less of an impact on the insulin fluctuations in your body. Therefore, if you are pregnant or have already developed gestational diabetes, then eliminating simple carbohydrates could help prevent or treat the condition. Furthermore, the impact of overly processed, packaged, or restaurant foods is impossible to fully predict, which makes controlling your blood sugar levels very different. Pack your own meals and be sure to include plenty of fresh vegetables and fruit, lentils, oats, quinoa, milk, okra, carrots, peas, and similar food items. Avoid bread, especially white bread, and other empty carbohydrates found in junk food. [7]

Diabetes is most commonly associated with a sugary diet and obesity, as the disease relates directly to insulin receptors. Therefore, one surefire way to protect yourself from gestational diabetes is to eliminate sugar from your diet entirely. There are plenty of alternatives when you’re living in a sugar-free world, including things like Stevia and agave nectar, both of which are natural sweeteners with much more complex sugars that the body needs, rather than simple sugars that will exacerbate or cause gestational diabetes. [8]

A Final Word of Warning: Although the symptoms of gestational diabetes are generally mild, it is still important to speak with your medical professional regarding any concerns you may have regarding your body’s behavior or major dietary changes you are considering. The health of your child will always be your top priority, and your choices while pregnant can have serious, long-term effects on your new child. The above treatments should be implemented and considered in addition to (and only after) speaking to a doctor.

Rate this article
Average rating 3.7 out of 5.0 based on 268 user(s).
Read This Next:
Popular Articles