For those who want to sweeten up their healthy diet, raw honey is an excellent option. Thanks to its nutrient-dense nature and delicious taste, it is one of the most popular sweeteners in the world, and one of the healthiest choices you can make.

What is Raw Honey?

Raw honey is completely pure honey that is derived directly from the beehive. It is completely unheated, unprocessed, and unpasteurized. Raw honey is well known to be a dense source of many nutrients that can protect your overall health, and it also contains certain compounds that are lacking in more commercial forms of honey. The best means of getting raw honey is directly from beekeepers, as that is the best way to know that it is authentic. [1]

Some people wonder whether this type of honey is safe, and except for those who have allergies to bee pollen or the flowers from which the nectar is harvested, there is very little risk. 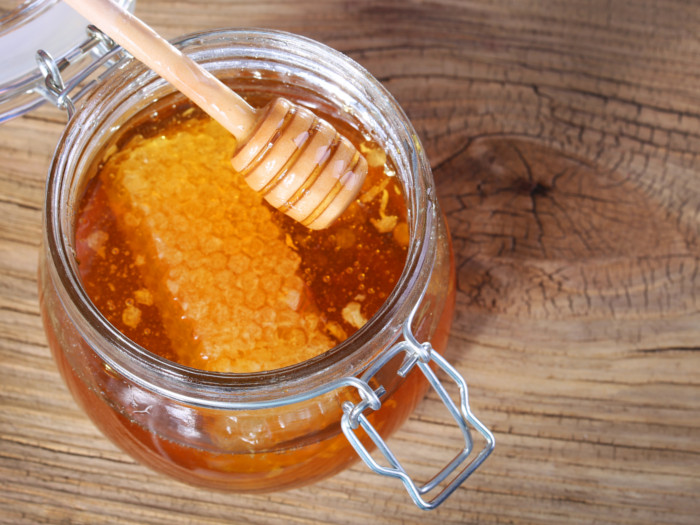 The nutritional content of raw honey is impressive and includes high levels of protein, amino acids, B vitamins, calcium, manganese, potassium, magnesium, zinc, and iron, as well as various polyphenolic antioxidants that boost overall health. A single tablespoon does contain just over 60 calories, and while there isn’t any fat or cholesterol in the honey, it is relatively high in sugar and should be consumed in moderation. [3]

The most notable health benefits of raw honey include its ability to increase energy, aid sleep disorders, eliminate bacterial infections, regulate diabetes, and protect the respiratory system, among others.

Honey has several natural antibacterial properties, and even contains small amounts of hydrogen peroxide, making it ideal to protect the immune system and defend against a variety of infections. [4]

As per a study published in 2018, for people with diabetes who responsibly use raw honey, it can have less of an effect than regular sugar, and functions as an ideal sweetener in moderation! [5]

The soothing nature of this honey, in addition to its magnesium content, can be the perfect complement to a cup of nighttime tea and will help you drift off into a restful sleep.

Raw honey is often applied to burns and wounds, as the minerals and antioxidants can speed the healing process, and reduce the appearance of scars and other skin blemishes. [6]

This type of honey provides a concentrated dose of carbohydrates, as well as protein and amino acids, all of which are valuable resources for the body, and can speed the metabolism while keeping you focused and energized.

From sore throats and coughing fits excess mucus and tightness in the chest, the soothing, relaxant and antioxidant properties of raw honey can quickly treat these symptoms. [7] [8]

Despite the many benefits, there are potential side effects of consuming raw honey, including blood sugar regulation, weight gain, botulism, and various allergic reactions.

There are carbohydrates (sugars) in this honey, so it is best to consume in moderation, as it will result in a rise in your blood sugar. This is particularly important for anyone who suffers from diabetes.

One of the unusual dangers of raw honey is the chance that may contain spores of Clostridium botulinum, which can cause serious side effects, especially in young children. [9]

Although the calorie count of this honey isn’t extreme, excessive consumption can lead to a gradual weight gain, if you don’t account for the increase in your diet and exercise.

Some people are allergic to either bee venom or the pollen from particular flowers that led to the production of honey, which can cause gastrointestinal distress, swelling, redness, rashes, and discomfort.

Where to Buy Raw Honey?

Some of the best places to buy this honey are directly from beekeepers, who often have small commercial amounts available for sale. However, when purchasing this honey at stores of any kind, it becomes much more important to note if processing or pasteurization was done. That being said, some genuine raw varieties are sold in larger stores, but it is always better to get it directly from the source.

There are a few key differences between raw honey and regular honey, namely, the raw variety is the pure golden liquid goodness from the beehive, while regular honey has often been processed, handled, heated, and pasteurized before being packaged into a product. Also, there may be more additives or preservatives in regular honey. Manuka honey, on the other hand, is named for the type of honey – one that is made exclusively in Southern Australia and New Zealand by bees who extract nectar from manuka flowers. [10]

Rate this article
Average rating 3.1 out of 5.0 based on 15 user(s).
Read This Next:
Popular Articles