What are the Stages of Pregnancy?

Every pregnancy has three trimesters – the 1st, 2nd, and 3rd trimesters – which mark major steps in the development of the fetus and the progression of the pregnancy term. The trimesters tend to be broken up into 3 equal periods of 12-13 weeks, as the average pregnancy is actually 40 weeks. This basic distinction can help many women better understand the changes that they experience. Many medical standards are based on the average activity and development patterns within these three stages of pregnancy. [1]

Although we are traditionally taught that pregnancy is a 9-month process, it is actually closer to 10 months in the average case. The beginning of pregnancy tends to be noted from the last day of menstruation before conception (about 2 weeks). Following this, three trimesters of 12-13 weeks will occur, resulting in a total gestation time of approximately 40 weeks.

When looked at from this perspective, the general changes in a woman’s body are quite clear, and most people find it easy to understand the basics of conceiving and delivering a child. However, the physical, emotional and physiological changes of both the mother and child can be quite different in different trimesters. While some things remain consistent through the entire pregnancy, a further division into trimesters is helpful for doctors and expecting mothers alike. 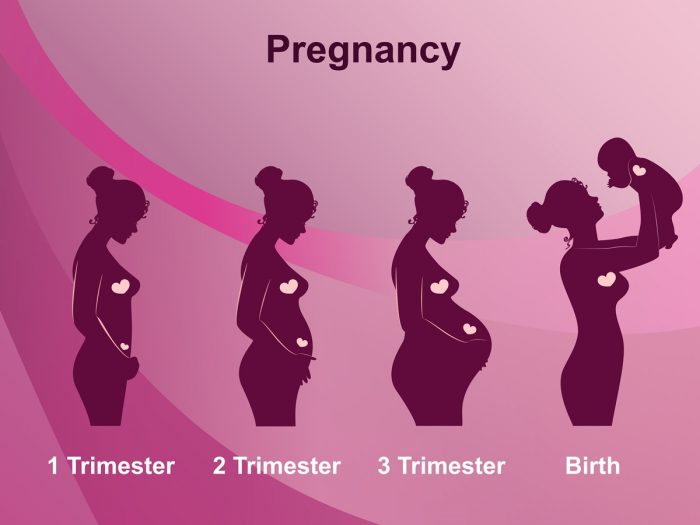 As mentioned, there are three main stages of pregnancy, and while every woman’s experience is different, the following description of each trimester can be a general guide for most women.

The first trimester lasts from week 1 – week 12. At the beginning of the first trimester, the first major event is the conception of your child, in which the egg is fertilized by a sperm cell. That egg’s first mission is to travel to the uterus, where it will implant itself 6-12 days after conception. This will begin the intense hormonal changes in a woman’s body, the first sign of which is a missed period. [2]

The symptoms of an early pregnancy (1st trimester) include nausea and vomiting, fatigue, mood swings, headaches, constipation, weight gain and weight loss, swollen breasts and unusual food cravings. These symptoms can drastically vary in severity between women, with some never experiencing “morning sickness”, and others who notice no difference in their dietary cravings. Some of the factors that can affect your symptoms during the first trimester include your weight, whether you have had children in the past, your hormonal levels, blood pressure, and dietary choices. [3]

Meanwhile, during the first trimester, your baby grows from the size of a single cell to the size of a lime and may weigh no more than 1 ounce. By the end of those twelve weeks, it can be determined whether your child will be a boy or girl, its nervous system will be developing, and its eyes will stay close for the next 3.5 months until they fully develop.

Weeks 13-28 are typically considered the second trimester (and often the longest). The massive flood of hormones that may have wreaked havoc on your life during your first trimester will be noticeably reduced. However, some of the more visible symptoms of pregnancy will begin to occur, such as the famed “baby bump”, the slight bulge in the stomach that can be hard to hide. You will also experience other physical symptoms such as an increased pain in the hips, back, groin, and legs, as your womb expands to accommodate the fetal growth. [4]

Women may also experience other symptoms, such as darkening nipples, itching throughout the body (a result of some ongoing hormonal changes), and swelling in the ankles, face, and legs, as well as stretch marks on the abdomen. The baby growing inside will be about 1 foot long and will weigh approximately 2 pounds, which represents far more physical mass and change that occurs during the first trimester. The baby will have fingerprints at this point, as well as red blood cells, bone marrow, early sex organs, and the ability to sleep regularly at different points in the day. This is also the trimester when you may begin to feel “kicks” or the movement of your baby as it adjusts position within the uterus. This particularly happens in the final month of the second trimester. [5]

The final trimester runs from weeks 28-40, and represents the most significant period of growth by the baby, at least in terms of the physical signs in the expectant mother. Since the baby is growing at such a rapid rate by this point, the expanding uterus will begin putting pressure on internal organs. This can result in additional ache and pain, as well as the need to urinate much more frequently. Back pain is common in the third trimester and physical activity should be consciously decreased to prevent exhaustion. [6]

The third trimester is often the most stressful, as there are a number of things that can happen, such as the baby dropping to occupy a lower area of the abdomen, as well as an increased movement by the infant. Contractions may also be experienced during the final trimester, which many women incorrectly assume to be an early delivery. The average size of a baby at the end of 37 weeks is just over 6 pounds, and roughly 1.5 feet in length. There is very little growth from weeks 37-40, but the exact timing of delivery is different for every woman. The baby may change position (head down), which is in preparation for delivery, but this doesn’t always occur. [7]

You are likely to experience an increase in your appetite during final trimester, as you are truly eating for two by this point. Provided the pregnancy has proceeded normally to that point, the third trimester ends when labor contractions begin and the baby is delivered. Again, due to the unpredictability of pregnancy, a normal birth could occur at any point from the 37th to 40th week.

Rate this article
Average rating 4.0 out of 5.0 based on 141 user(s).
Read This Next:
Popular Articles