With its distinctive shape and flavor, star anise is quickly becoming one of the most sought-after spices in the world, particularly due to its potential effects on human health. Its relative accessibility and cost make it an excellent option for both culinary and medicinal applications around the world.

What is Star Anise?

Star anise is actually the hard pericarp of the fruit of the star anise tree, which is scientifically known as Illicium verum. Native to Southeast Asia and parts of China, this hardened fruit can be ground into a valuable powder to be used as a spice or even used whole in certain preparations and dishes. This star-shaped spice is highly desired due to its active chemical compounds, particularly those found in star anise oil. This herb also contains a compound called shikimic acid, which is a very important part of anti-influenza medications around the world. Extracting and processing this acid takes an entire year, so the cost of this herb is largely determined by the global demand for influenza medications. [1]

However, this herb has been used for thousands of years for culinary and traditional medical applications due to its flavor, which closely resembles the more expensive aniseed, as well as its rich nutrient density. The name star anise is a combination of its shape and its similarity in flavor to aniseed. Although the plants are not related, the presence of anethole in both plants provides the distinctive licorice flavor, which makes it so popular in cooking. [2]

There are a few different variations of star anise, some of which are toxic to consume, so caution should be taken when cultivating your own or purchasing from a new herbalist/natural healer. When used in moderation, this spice can also provide an impressive list of health benefits.

Star anise contains a high level of antioxidants, such as linalool, quercetin, thymol, terpineol, caffeic acid, anethole, kaemferol, and coumaric acid, as well as a significant amount of iron. Also contained in star anise are smaller amounts of vitamin C, calcium, potassium, and magnesium. The other active compounds and organic acids, such as shikimic acid, fats, and dietary fiber, also provide star anise with a few extra health benefits. The calorie count in star anise is also quite low, with only 23 calories in 1 tablespoon of whole star anise fruit. [3] 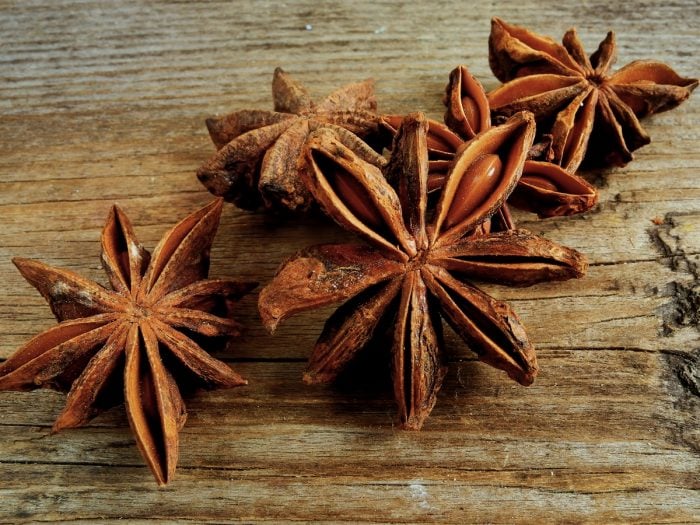 May Aid in Improving Skin Health

With a relatively high level of various antioxidants, star anise can help to promote the elimination of free radicals throughout the body, particularly those that can cause oxidative stress in the skin. This can help minimize the appearance of wrinkles, boost skin elasticity, and cover up old scars and blemishes to keep your skin looking young and vibrant. [4]

The antibacterial effects of star anise are widely researched and well known, and this spice is known to have been used to treat bacterial infections of the stomach and other parts of the body for centuries. Perhaps most importantly, this spice appears to be effective against several antibiotic-resistant bacterial strains, making it very valuable to the pharmaceutical industry. [5]

May Act as a Remedy for Respiratory Infections

More specifically, star anise can help in supporting respiratory health, so if you have a cough or sore throat, or feel the early stirrings of the flu, a cup of anise tea may be able to sort out the inflammation rapidly and neutralize the underlying infection before more serious symptoms arise. [6]

May Act As a Remedy for Sleep Issues

Numerous studies have found that star anise possesses some level of sedative properties, attributed to the antioxidant levels and the magnesium content of the spice. It can stimulate the release of certain neurotransmitters that induce relaxation and sleep, making this spice valuable for people who suffer from insomnia and regularly interrupted sleep patterns. [7]

The most notable mineral found in star anise is iron, and a single tablespoon of these small fruiting bodies contains roughly 13% of your daily recommended amount. While eating an entire tablespoon of these fruits is unlikely, the concentration of iron can still help boost red blood cell production, thus increasing energy levels by promoting circulation and proper oxygenation of the body’s extremities. [8]

Most notably, this spice has powerful anti-fungal properties and has been a trusted natural remedy for a huge host of fungal infections, including Athlete’s foot, ringworm, Candida, and other common strains. While most fungal infections are relatively harmless, a regular dosage of star anise tea can give your immune system the necessary boost against these pathogens. [9]

Anecdotal evidence points to star anise as being an effective digestive, and the fruits are commonly eaten after meals to promote proper digestion. It can also help to relieve bloating and excess flatulence, while also easing cramping and improving the bacterial balance in your gut for high nutrient uptake efficiency. [10]

The effects of star anise on hormone levels are widely studied, as it can have quite a powerful effect on both men and women. In men, it can provide an energetic boost and increase sex drive, whereas in women it can regulate menstrual cycles, control mood swings, and other hormone-driven side effects of menstruation. [11]

The diverse range of antioxidants in this spice, from quercetin and kaemferol to thymol and coumaric acid, can all affect oxidative stress in the body. A team of Malaysian researchers published a study in the South African Journal of Botany, which stated that trans-anethole, one of the major constituents of Illicium verum Hook (the scientific name of star anise), has been reported to have antitumor activity against, breast cancer, cervical carcinoma, fibrosarcoma, and Ehrlich ascites tumor. Meanwhile, research is undergoing to conclude if it has the ability to reduce the progression of colon cancer. [12]

How to use Star Anise?

Star anise can be used in a number of ways, either in the ground or the whole form. Most popularly, this spice is used in other spice mixes, such as “five-spice” powder, which is a popular blend in many cultures. The unique licorice flavor of the spice makes it a welcome addition to both sweet and savory dishes and is very effective in soup broths, sauces, and even curries. The spice may be too strong for mild dishes, but in certain cocktails, it can provide an unusual and pleasant taste. Brewing star anise tea is also common in some parts of the world.

How to Make Star Anise Tea?

Star anise tea is brewed around the world and is trusted as a rapid remedy for a number of respiratory conditions, gastrointestinal distress, and hormonal imbalances, among others. The tea is also easy to brew and quite delicious!

Side Effects of Star Anise

While many people praise this spice for its potential health benefits and antioxidant effects, it is important to consider the various side effects connected to it including drug interactions, hormonal fluctuation, and various allergic reactions.