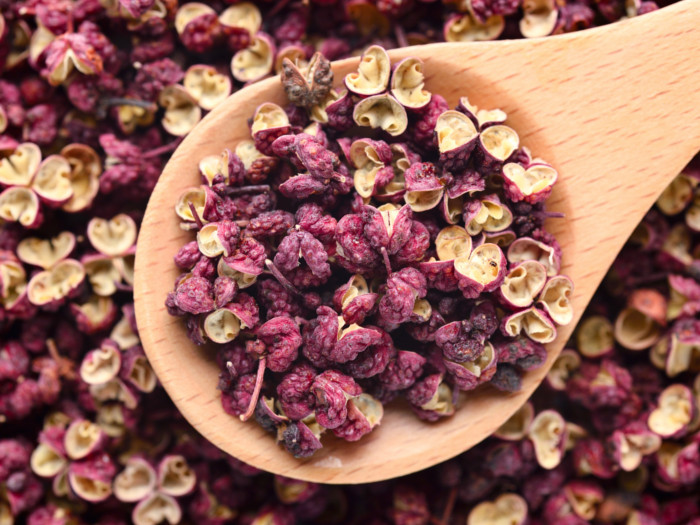 Szechuan pepper is not spicy hot like a chile pepper. Photo Credit: Shutterstock

Grains of Paradise, sometimes called alligator pepper or African pepper, is a common North African spice. It is not actually a peppercorn, although it looks like one, but instead belongs to the ginger family. The flavor is similar to cardamom, clove, and lemon. [2]

These little dark berries are not related to peppercorns either, but they look very much the same. The smell of Tasmanian pepper is similar to juniper, and the flavor is peppery, woodsy, and floral, with some sweetness. As a substitute for Szechuan peppercorn, it will be a little milder, and you can use a bit more of it.

Tellicherry peppercorns may be used to refer only to peppercorns grown in a certain region of India. These days, however, Tellicherry means any large peppercorn that has been left on the plant longer, allowing it to mature and ripen more than regular black peppercorns. The longer time on the vine allows the flavors to deepen, giving them a woodsy, citrus flavor, which makes them a good substitute for Szechuan peppercorn. Tellicherry is considered the highest quality of peppercorn. [3]

These two common spices together may recreate some of the pine flavor and citrus notes of Szechuan peppercorns. Use fresh pepper for the most heat possible, and fresh ground coriander for a pungent, fresh, citrus flavor.

If you’re really in a bind, you can use common black pepper as a substitute. This may have none of the complexity of flavor, but it can support the peppery heat of the dish. Use fresh ground black pepper if possible. A dash of lemon juice will help as well.