Is Turkey Bacon A Healthier Alternative

Turkey bacon is a low-fat alternative to traditional pork bacon made from chopped, cured, and smoked turkey that boasts a relatively healthy nutritional profile.

What is Turkey Bacon?

Turkey bacon, as the name implies, is a type of bacon made from turkey instead of pork. The inherently lower fat content of turkey resulted in the rise in the alternative’s popularity. It is made from the chopped, processed, and blended turkey that is then formed into strips that resemble normal pork bacon, and may contain seasonings, additives, and preservatives. The lower fat content and production method means that turkey-based bacon doesn’t shrink up as much when cooked, but it also has a tendency to stick to the pan. It can be deep-fried, baked or microwaved, much like normal bacon. While some aspects of turkey are healthier than pork, moderation is still key. [1] 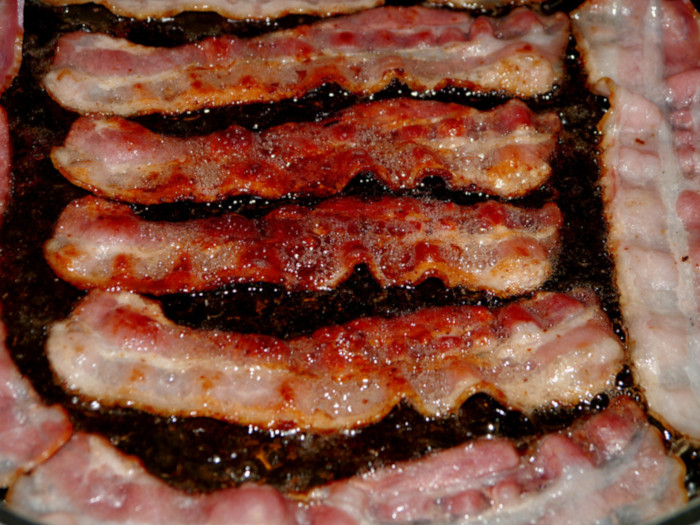 Bacon is prepared from several different cuts of meat, typically from the pork belly or from back cuts. Photo Credit: Shutterstock

On average, two slices of turkey-based bacon contain about 75% of the protein content of pork bacon (4.5 grams versus 6 grams). The fat content of one serving of turkey bacon is roughly the same at 4.5 grams, versus 6 grams for pork bacon. There are about 1.3 grams of saturated fat, versus two grams in pork bacon. Bacon made from turkey has moderate amounts of vitamin B6, zinc, niacin, phosphorus, and selenium, but slightly less of all these essential nutrients than pork bacon. In an effort to add sweetness and flavor, some companies will add sugar to this pork bacon alternative, which can increase the carbohydrate count. [2]

There are a few benefits of turkey-based bacon, including its potential impact on weight-loss efforts, its low price, and its acceptance by those who are religiously prohibited from eating pork.

Tips to Make It Healthier

If you’re going to eat this pork bacon alternative, there are a few best practices to make it even healthier.

Although there aren’t any acute negative side effects of eating this pork alternative, there are some health risks associated with it, particularly due to its high sodium and added sugar content. Many people view this alternative as a healthier choice, and therefore overindulge, resulting in even higher sodium, saturated fat, and calorie intake than if they had eaten a normal serving of pork bacon. Furthermore, the chemical preservatives and added sugars in bacon made from turkey must be considered if you’re trying to eat a cleaner diet.