There are many different types of cabbage, some with different nutritional profiles and potential health benefits, so it’s good to know what makes each one of them unique.

The most popular types of cabbage include bok choy cabbage, choy sum cabbage, napa cabbage, red cabbage, green cabbage, and savoy cabbage, among others. Also, find tips to use them in your diet.

The other type of Chinese cabbage, bok choy cabbage emerges from clear and distinct stalks at the bottom of the “head”, which make it look more like Swiss chard than other types of cabbage. However, its taste is similar to other cabbage varieties, albeit quite mild. The bright white stalks at the bottom turn to pale green when the plant is ripe, and there are countless stir-fry recipes, soups, ramen, curries, and other dishes that benefit from this heart Brassica vegetable. [1] 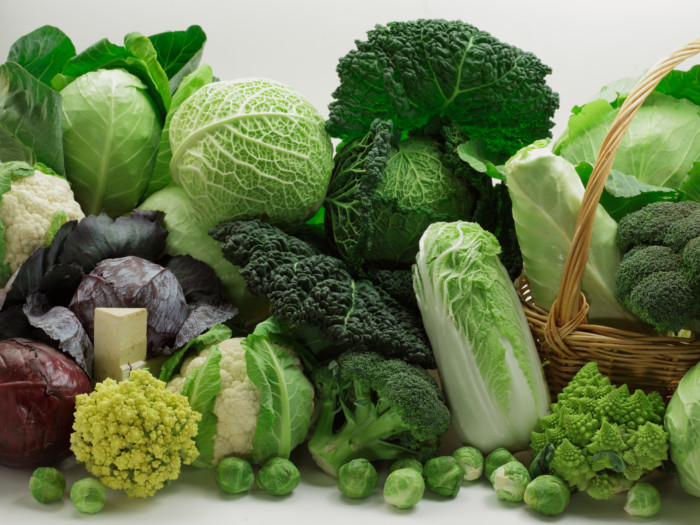 This type of cabbage is most commonly grown and used in China, and may also be known as the Chinese flowering cabbage. The leaves never coalesce into a compact head, like other cabbages, but the flavor is mild. [2]

Also known as Chinese cabbage, Napa cabbage is actually one of two variants falling under that classification, the other being bok choy. Unlike green cabbage, this variety doesn’t grow off of a large head but instead grows from narrow white stalks, giving it the appearance of other Brassica vegetables, such as Swiss chard. The flavor of this cabbage is notable, as it is slightly peppery, making an excellent addition to salads, slaws, and as a key ingredient in many kimchi recipes. [3]

Easily spotted for its deep purple or dark red exterior, red cabbage has tightly enclosed leaves that are slightly thicker and dense with water than many other cabbage varieties. The size of the heads tends to be smaller than green cabbage, but the flavor is very rich and the crunch of the leaves doesn’t disappear when mixed with sauces. That is why this is one of the most popular types of cabbage for coleslaw, as it complements the vinegar and acidic flavors so nicely. [4]

This is one of the most common varieties of cabbage, and is also the most versatile, particularly because it can be used in so many recipes without losing its crunchy and flavorful nature. These cabbages have round heads with tight thin leaves that look moist and fresh, surrounded by broad outer leaves. This cabbage has a mild enough flavor to use in salads or in various slaws. [5]

Perhaps the prettiest variety of cabbage, the delicately laced leaves of Savoy cabbage are loose around the center of this somewhat smaller head, but the leaves have a similar flavor and texture as green cabbage. Sometimes referred to as curly cabbage, this variety has many uses in salads, and can also be lightly fried in butter for a savory and refreshing side dish. These are also the cabbage leaves you will often find in lettuce wraps, due to their thin, yet sturdy nature. [6]

Rate this article
Average rating 4.2 out of 5.0 based on 44 user(s).
Read This Next:
Popular Articles