The health benefits of Swiss chard are amazing and may include the ability to regulate blood sugar levels, prevent various types of cancer, improve digestion, boost the immune system, reduce fever, and combat inflammation. It may also help lower blood pressure, prevent heart diseases, increase bone strength, detoxify the body, and strengthen the functioning of the brain.

Swiss chard is a leafy green vegetable that is scientifically classified as Beta vulgaris subsp. cicla, and it belongs to the family Chenopodiaceae. Swiss chard is actually a common name, but in reality, you can simply call the vegetable ‘chard’. It is closely related to beets, and actually has the same scientific classification, but beets are usually cultivated for the roots, while Swiss chard is grown for its leaves. [1]

Swiss chard has been around cultural diets for many centuries, probably for as long as beets, which go back thousands of years. However, since the two subspecies are so similar, it is difficult to trace the exact lineage or native region of swiss chard. However, it is grown most commonly and easily in the Northern Hemisphere and is very popular as an ingredient for Mediterranean cooks. The first documented use of chard in cooking was in Sicily.

Swiss chard is usually eaten raw in salads, cooked, or sauteed. The bitterness of the raw leaves dissipates when cooked, leaving a soft, delicious flavor, more subtle than spinach, which chard is often mistaken for.  But why so much focus on this leafy vegetable, when spinach is more readily available and provides a number of health benefits? Let’s find out what nutritional content is in swiss chard that makes it so valuable as a dietary staple! 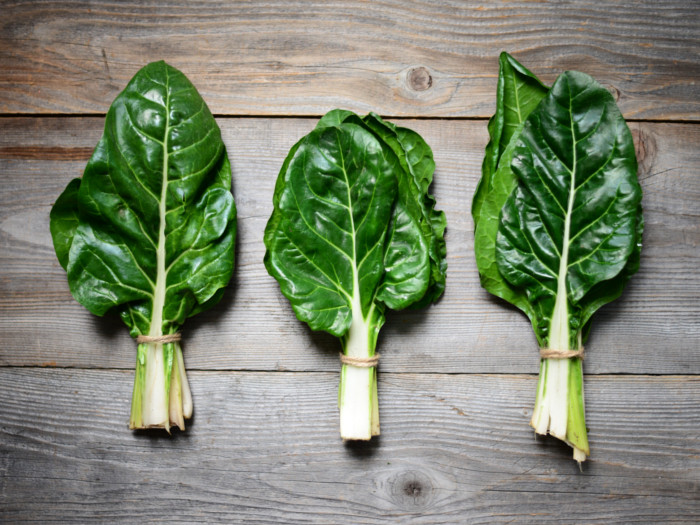 Swiss chard is a leafy green that may have health benefits for people with diabetes or osteoporosis. Photo Credit: Shutterstock

The many health benefits attributed to chard are due to its impressive list of vitamins, nutrients, and organic compounds, which include vitamin K, vitamin C, and vitamin A, as well as vitamin E, riboflavin, and vitamin B6. In terms of minerals, Swiss chard has a wealth of magnesium, manganese, potassium, iron, sodium, and copper. Furthermore, in addition to dietary fiber, chard has a significant amount of polyphenolic antioxidants, phytonutrients, and enzymes that are unique and highly beneficial to your health.

Let’s look at the health benefits of Swiss chard in detail.

One of the most important benefits of Swiss chard is its potential ability to regulate the blood sugar levels in our body. It inhibits the activity of a specific enzyme named alpha-glucosidase. This means that fewer carbs are broken down to simple sugars, which allow the blood sugar levels in the body to remain stable and prevent hazard for diabetics, or for those people who are at high risk of developing the disease. [3]

Swiss chard has a significant amount of calcium in those leaves, which means that it may provide a major boost for bone health. Calcium, as well as the other minerals found in this vegetable help stimulate bone growth and development, including magnesium and vitamin K.

May Act As A Brain Booster

Swiss chard is a valuable source of both potassium and vitamin K, both of which are found in significant amounts in the brain and are integral parts of boosting cognitive development and abilities. Add some Swiss chard to your diet and expand your mind!

Iron and copper are both essential elements of red blood cells, and without those two minerals, people can develop anemia, which shows itself as weakness, fatigue, stomach disorders, and lack of concentration. By ensuring a proper amount of red blood cells by eating food like Swiss chard, you can increase blood circulation and oxygenation to essential organs within the body. [4]

The anti-inflammatory and phytonutrient antioxidants found in Swiss chard, along with potassium, all contribute to reducing blood pressure and stress on the cardiovascular system. Hypertension is due to pro-inflammatory enzymes within the body, which the organic compounds in Swiss chard are able to neutralize. Therefore, Swiss chard protects from a variety of conditions like atherosclerosis, heart attacks, and strokes. [5]

Swiss chard has a huge amount of beta-carotene, which has been linked in many ways to optimal eye health and a reduction in macular degeneration, glaucoma, night blindness, and other vision-related conditions. [6]

May Lead to Healthy Hair

Swiss chard may also have a possibly significant amount of biotin, among its many other beneficial compounds. Biotin is an organic compound that has been directly linked to healthy hair, the stimulation of follicles, and as a way to increase luster and texture. [7]

Like many leafy, green vegetables, Swiss chard may have anti-cancer properties due to the huge amounts of antioxidants found in it. According to the Institute of Biochemistry, Department of Biomolecular Sciences, University of Urbino ‘Carlo Bo’, Urbino, Italy, it may contain significant amounts of antioxidants like xylosylvitexin, which have been connected to preventing a wide variety of cancers, specifically colon cancer. [8]

Rate this article
Average rating 4.1 out of 5.0 based on 249 user(s).
Read This Next:
Popular Articles