Bok choy may have a funny name, but it also has a wide range of health benefits, including its role in boosting the immune system, protecting the health of eyes, preventing chronic disease, increasing heart health, building strong bones, boosting circulation and speeding healing.

What is Bok Choy?

Bok choy is a type of Chinese cabbage. It is an incredibly rich source of nutrients, vitamins, and minerals. Unlike many other types of cabbage, bok choy does not form heads, but rather spreads a dense cluster of leaves, similar to mustard greens. These smooth dark green leaves are often used as salad greens and included in many different dishes in Asia and European countries.

It can be easily found in many parts of the world, particularly in Europe, where it is commonly grown and in most of the import stores and larger grocery stores 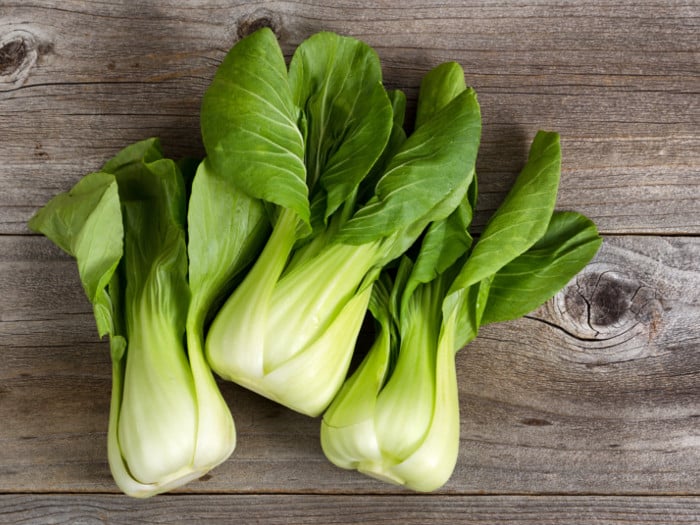 As mentioned, bok choy is among the top three nutritious plants in terms of nutrient density. According to USDA, in a single 100-gram serving, bok choy contains only 13 calories, yet it supplies huge amounts of vitamin C, A, K, and B6, as well as various other minerals and essential nutrients that can seriously affect human health.

The other nutrients include:

This dense vegetable has earned its place in the diet of many health-conscious people and is often used as a replacement for spinach, collard greens, and other cruciferous vegetables.

The many health benefits of this imported vegetable have made it hugely popular in health circles, so let’s take a look at some of the healthy advantages that bok choy can provide.

One of the most obvious benefits of bok choy is the impact that it can have on the bone structure and mineral density. The combination of critical minerals, such as iron, zinc, magnesium, and calcium found in bok choy can help to prevent osteoporosis and keep your bones stable and strong well into your advanced years. Furthermore, a high level of vitamin K is found in bok choy, and adequate levels of this oft-overlooked vitamin are associated with lower risks of bone fractures as you get older.

Iron plays a key role in the production of red blood cells. For those who may not get enough iron in their diet, adding bok choy may help solve that problem very quickly. Adequate iron means proper circulation and oxygenation of key organ systems and extremities of the body.

Vitamin K is a very important part of any diet and is closely related to many areas of health, including bone strength and heart health, but in particular, it is known as a blood-clotting agent. For someone recovering from an injury or surgery, or experiencing excess bleeding, such as from hemorrhoids or unusually heavy menstruation, bok choy may be of help.

Bok choy is like many other cabbages and cruciferous vegetables in that it possesses sulfur-based compounds that are may help lower the risk of developing chronic diseases.

These compounds act as antioxidants and eliminate free radicals before they have a chance to cause healthy cells to mutate or induce oxidative stress in tissues and organ systems.

One of the major vitamin components of bok choy is vitamin A, which is composed of various carotenoids, including beta-carotene and alpha-carotene. Furthermore, vitamin A is closely associated with eye health and the prevention of macular degeneration and oxidative stress in the retina. This means that adding a strange-sounding vegetable to your salads may just keep your vision in line for a few extra years!

Some of the components found in bok choy, particularly folic acid and vitamin B-6, are linked to improving the strength of the heart. More specifically, these substances can reduce the level of homocysteine in the blood, which is a strong indicator of heart disease and other cardiovascular issues.

Vitamin C not only helps stimulate the production of white blood cells, but it also acts as an antioxidant, preventing oxidative stress and chronic disease throughout the body. Bok choy has vitamin C and it can help to improve the functioning of the immune system.

Vitamin C is also an important part of collagen, which is needed for healing and recovery, as well as in every cell of the body!

When it comes to bok choy, there is plenty of vitamin C to go around (33% of the daily recommended amount in a single serving) and it can definitely aid in the rejuvenation of the skin. Vitamin C helps in the production of collagen, and therefore help improve the health and appearance of the skin. Every skin cell requires collagen to be formed, further accentuating how important ascorbic acid is in our diet.

In a single cup of bok choy, there is roughly 20% of your daily recommended amount of potassium. This is very important for heart health, as potassium works as a vasodilator to relieve tension on blood vessels and thus lower strain on the cardiovascular system.

Potassium is also a critical aspect of bone health, and water balance throughout the body.

Due to the high levels of vitamin K found in bok choy, patients already taking blood-clotting medicine should speak to their doctor before adding this cruciferous vegetable to their diet.

Also, when eaten in extreme amounts, raw bok choy could potentially have a negative effect on the thyroid function. However, cooking bok choy usually eliminates this danger.